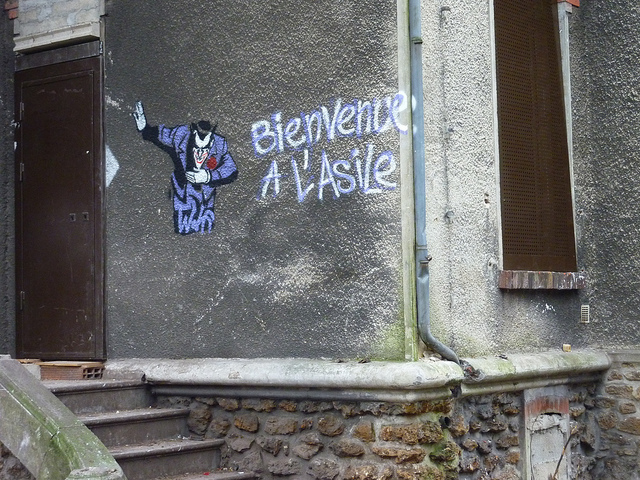 THE Living Rent tenants union have stepped up their campaign for a legal restriction on housing evictions over the winter months, as France’s Winter Break begins today [1 November].

The French winter break has been in place since 1956 and ensures that no one is evicted from a rented property or has their gas and electricity switched off from 1 November  to 31 March.

From 2017 for the first time people living in temporary accommodation or any “inhabited places” are also covered by France’s ‘Winter truce’, La trêve hivernale, which aims to prevent people living on the streets in freezing conditions.

The call for the Winter Break to be introduced in Scotland comes as fears rise for homeless people as bad weather kicks in, with temperatures  set to plummet to freezing over the weekend.

Met Office forecaster Bonnie Diamond sai din relation to Scotland: “Especially overnight on Friday and Saturday there is a risk of ice and frost as temperatures fall close to or below freezing.”

The Ferret, working in partnership with the Bureau for Investigative Journalism, reported last month that at least 94 people had died in Scotland while homeless over the past 12 months, with half of them – 47 – dieing in Glasgow.

Today, National Records of Scotland have said it will review whether to introduce official statistics on homeless deaths.

Living Rent have organised a petition through change.org to support their campaign for a Winter Break in Scotland. 2,312 people have currently signed it.

The petition states: “Shelter Scotland estimate that 5,000 people sleep rough on Scotland’s streets throughout the year. The main route to homelessness is the loss of a tenancy. In Glasgow alone, 39 people died between May 2016 and March 2017. This risk is far higher in the winter. And this situation is completely avoidable.

“The “winter break” law helps reduce the risk of people having to sleep rough during the winter, and reduces winter deaths. Help us win this for people in Scotland too.

“We are calling on the Scottish Government to implement a similar law against evictions during the winter. We do not want anyone sleeping rough this winter and any more winter deaths in Scotland.”

The Scottish Government accepted all 70 of the recommendations of its homelessness and rough sleeping action group, which published its final report in June.

One of the recommendations was for short term emergency accommodation for destitute migrants not entitled to statutory homelessness assistance due to not being a citizen of the UK.

At First Minister’s Questions today, Scottish Greens co-convenor Patrick Harvie called on the Scottish Government to speed up implementation of this recommendation as winter sets in.

He said: “Five months after the Scottish Government accepted the recommendation that there must be funding for emergency accommodation for those at immediate risk, we desperately need to know what progress is being made and when it’ll be available. This provision does not yet exist, and with winter coming, it’s needed now.

“We need more than just words; we need immediate action; we need an urgent timetable for implementation – a commitment to fund an integrated service with emergency accommodation and support services support services for vulnerable migrants.

“We know that there is no legal barrier to funding these services, even for those people the UK has abandoned with the label ‘no recourse to public funds’. No-one should be destitute in 21st century Scotland and we want a clear commitment that the government will take the action necessary to prevent this humanitarian crisis on our own doorstep.”

“Asylum seekers, many of whom have endured great hardship and are particularly vulnerable, should be treated with dignity and respect at all stages of the asylum process and it is clear that the current UK asylum system, which is entirely reserved, is exacerbating these problems. We have highlighted our deep concerns in this area to the Home Office in person and in correspondence and will continue to do so.

“The Scottish Government is limited in the help that it can provide to people seeking asylum, as they have no recourse to public funds under immigration legislation, which is reserved to the UK Government.

“We recently provided an additional £130,000 to third sector partners with the ability to help people who are facing destitution. We have provided additional funding to help charities cope with the influx of people that it is having to deal with, in light of decisions that have been taken on asylum seekers in Glasgow.  And in Parliament today, the Communities Secretary for Communities Aileen Campbell announced an additional £20,000 for Govan Community Project.”