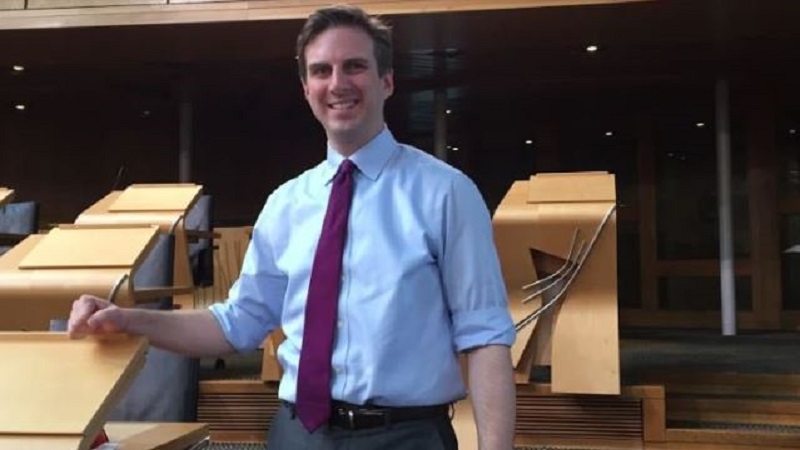 Huda Elmi, standing for election to Labour’s ruling national executive, also criticised the sale of a racist comic at the shop linked to the MSP

A RACIST comic book on sale in a shop linked to Edinburgh Southern MSP Daniel Johnson has prompted criticism of the Labour MSP, with his response to the discovery branded “unsatisfactory” by a senior Scottish Labour figure.

The Herald reported on Wednesday that Paper Tiger, a stationary shop in Edinburgh, was stocking the book “Tintin in the Congo” alongside related merchandise.

The Tintin in the Congo series, published in the 1930s, portrays the Congolese people as backwards or stupid, and the cartoons employ racist tropes about black people and depicts them as monkeys.

Johnson, Richard Leonard’s justice spokesperson in Holyrood, previously ran the stationary shops before selling them off to his business partner when he was elected to Holyrood. Official documents show Johnson still retains the trademarks.

Johnson told the Herald that he no longer had control of the company, and said: “My involvement is limited to licensing the trademark and name and I have no input into the management or product lines of the business. If I did, this book is clearly not something I would stock.”

Johnson’s Holyrood register of interests shows his shares in the company are worth £171,292, and he is listed as a “non-working” director of the company.

The MSP, who is viewed as being on the right of the party, backed Anas Sarwar in the most recent Scottish Labour leadership election. Sarwar came under fire during the campaign for his own links and shares to a company which did not recognise trade unions.

One senior Scottish Labour insider told CommonSpace this response was “not good enough”, suggesting that as the owner of the trademark Johnson could control what was sold in his name.

Tintin in the Congo was produced whilst the then Congo Free State, now the Democratic Republic of the Congo, was a colony under the control of King Leopold II of Belgium. Under Leopold’s control, the country effectively became lawless as white business owners were allowed to enslave and torture native people, forcing them to farm natural rubber.

Paramilitary forces policed so-called rubber quotas, and the hands of local villagers who failed to meet the target would be amputated before or after they were massacred. Conservative estimates suggest some five to 10 million people were killed.

Huda Elmi, a left-backed candidate for Labour’s ruling national executive, and a member of BAME Labour, was critical of the sale of the comic: “Caricatures such as the ‘Tintin in the Congo’ do harm by reinforcing prejudicial tropes and stereotypes.

Read More: ‘A new type of anti-racist movement’: Academic lays out vision for challenging ‘insidious’ and ‘institutional’ racism in Scotland

“Not enough is done to educate on the brutalisation of African people under European rule, where approximately five to 10 million were brutally massacred in the Congo alone. The sale of publications such as these create a romanticism with Empire unbefitting of our internationalist and staunchly anti-colonialist Party”

The book was no longer available in store when CommonSpace called. Michael Apter, who operates the store, said earlier: “We are a Tintin specialist collectors store and carry the entire Hergé catalogue; the historic context in which this book was written have been widely discussed within the fan community. In the interim, we removed the book from sale in the shop.”

An SNP spokesperson responded: “It seems remarkable that a retailer would be promoting such a publication in this day and age – one which perpetuates deeply offensive racial and colonial prejudices. It’s all the more troubling given it’s a comic book geared towards a young audience, being sold in a shop connected to a prominent Labour politician.

“Given Daniel Johnson has been forthright in condemning racism in the past, we trust he will now take swift action to address the matter.”

Johnson has previously called on Labour leader to adopt the controversial IHRA definition of antisemitism, which the party has been debating for a number of months.