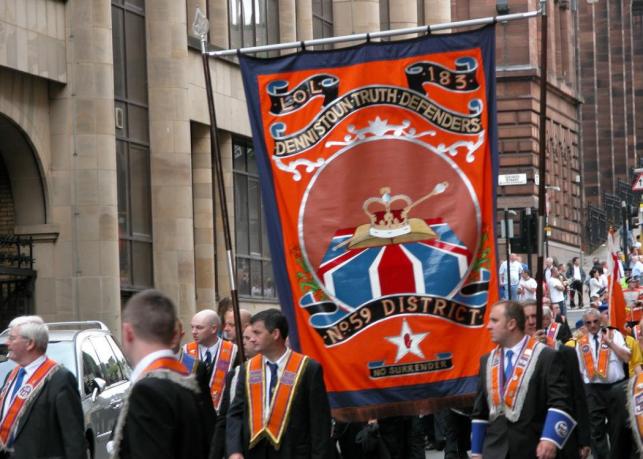 THE LABOUR PARTY LEADER of Falkirk council has pushed through over £1,000 in public grant funding to support the controversial Grand Orange Lodge of Scotland.

Craig Martin was one of eight Falkirk Labour councillors who supported giving the order a ‘community grant’ of £1,145, despite opposition claims that this represents a misuse of public funds.

The vote was held yesterday [Wednesday 18 May] at Falkirk council’s executive committee. Opposition councillors are warning that the money will reduce support for more “inclusive” events.

The Orange Order, which bars Catholics from membership, has been blamed for causing sectarian tensions in Scotland and Northern Ireland. Some public marches, known as ‘Orange walks’, have led to violence, disorder, and police arrests. The Order rejects claims it fosters anti-Catholic sentiment.

Martin has defended the decision to grant the lodge extra funding for a march in Falkirk on 25 June: “We agreed to make a small grant to the organisers of this event to offset some of their extra costs,” he said.

Eight Labour councillors voted in favour of the community grant being awarded, with opposition coming from the two SNP members present at the executive committee.

The committee agreed that all events should not have to pay costs for Temporary Traffic Regulation Orders (TTRO) for public marches and galas. However, members split when the proposal to provide extra funding to the Order from the ‘community grant’ scheme was raised.

#OrangeFest: The last stand of an organisation in terminal decline?

SNP councillor David Alexander said: “This isn’t about the right to parade. It’s about the proper use of a dwindling source of funding established to assist local groups put on events such as the Mariner’s Day in Camelon and the Bo’ness Fair, events which are inclusive.

“We have no difficulty with this group receiving the benefit of saving of the £725 on the cost of the TTRO they would have had to pay if the previous report had not been approved as all groups will benefit from this but the award of a further grant is a step to far.”

The SNP group is Falkirk say that the community grant funding decision is in breach of the council’s own guidelines, and that the Orange Order event will activity damage the local community.

SNP councillor Tom Coleman added: “Lets face it, local people will avoid Falkirk town centre on 25 June which will lead to a net loss of trade for the majority of traders.”

When asked about the community grant funding, Labour council leader Craig Martin released a statement that largely referred to the separate TRRO grant.

Martin said: “Organisers of events such as gala days and marches will be expected to pay for temporary road traffic orders (TRROs) which are required to ensure public safety as well as making their own arrangements to manage the traffic during the event.  Given that this is a new position adopted by Police Scotland we are suspending the fees payable for TRROs until we can get a report from officers on how this will work and how it is working across Scotland.”

In a final sentence, referring to the extra £1,145 of ‘community funding’, Martin added: “And we agreed to make a small grant to the organisers of this event to offset some of their extra costs.”

The Orange Order is a Protestant organisation that celebrates unionism – traditionally between Britain and Ireland, and now between England and Scotland.

The historical-religious aspect of the group’s rules, however, lead to accusations of bigotry. Anyone who marries a Catholic faces expulsion from the Order.