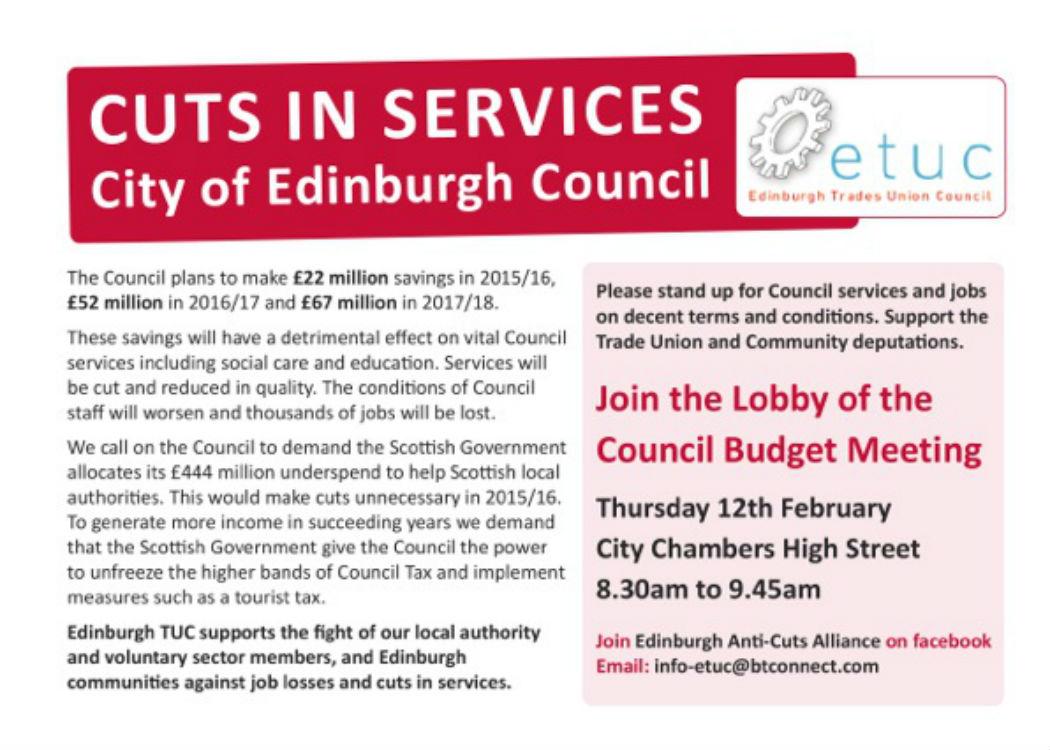 Edinburgh Trades Union Council (ETUC) plans to lobby a council budget meeting tomorrow (12 February) against major cuts to public services, that it says “will damage services and worsen poverty and inequality in the city.”

The ETUC will give a deputation to the council at tomorrow’s budget meeting, along with other trade unions, and has urged the public to join the lobby from 8.30am at City Chambers on High Street.

Des Loughney, ETUC secretary, told CommonSpace: “We already know that 70 people can’t be discharged from hospital because the council can’t afford to pay for the social care. This is hospitalising people who should be at home.

“The knock-on effect is bed-blocking, where there’s not enough beds freed up for patients who need it. There’s no doubt these cuts will increase the damage to the NHS locally.”

Health and social care cuts in Edinburgh City Council’s upcoming budget amount to PS5m, and other cuts include PS1.4m to Edinburgh Leisure, PS0.6m to community development and learning and PS4.3m to charities and other third sector service providers.

Loughney added that the cuts would have an effect in almost every part of Edinburgh’s public services, and believes the Scottish Government has to take some responsibility.

“The Scottish Government had an underspend of PS444m.” Loughney said, “If they gave councils across Scotland half of that there would be no need for any local government cuts. This was put to Nicola Sturgeon in parliament and she dismissed it.”

“There’s the council tax freeze as well, which means local government has no means of raising money,” Loughney added.

The ETUC are also supporting ideas put forward by the Green group in Edinburgh City Council for a visitor levy, a car parking levy and a supermarket levy that could bring in PS25.7m per annum if implemented.

“Edinburgh has five million visitors every year,” Loughney said. “If each of them paid PS1, that’s PS5m already.”

The Edinburgh Greens made the proposals in a ‘What if? Budget’, outlining what local government could do to raise money if it had the power. It is not currently within local government’s remit to introduce levies on car parking and visitors as proposed.

Gavin Corbett, Edinburgh Greens local councillor for Fountainbridge/Craiglockhart, told CommonSpace that while the ‘What if?’ budget would be the ideal option, the Greens have tabled an amendment to the Labour-SNP coalition proposal within the remit of what is currently feasible.

“The motion going to the council from the Labour-SNP coalition has the rough edges taken off it from the initial draft motion put to us, so for example the cutting of public toilets is now off the table, which is welcome,” Corbett said. “However, there is still lots in there which pose a serious risk to the quality of public services in Edinburgh.”

“The scale of the cuts in Edinburgh are a consequence of a local government system that’s broken,” Corbett added.

The Glasgow City Council budget meeting is set for 19 February, and Glasgow Unison and other trade unions have teamed up to propose a ‘No Cuts budget’ funded through increasing the council’s debt and taking funds from the General Reserve.