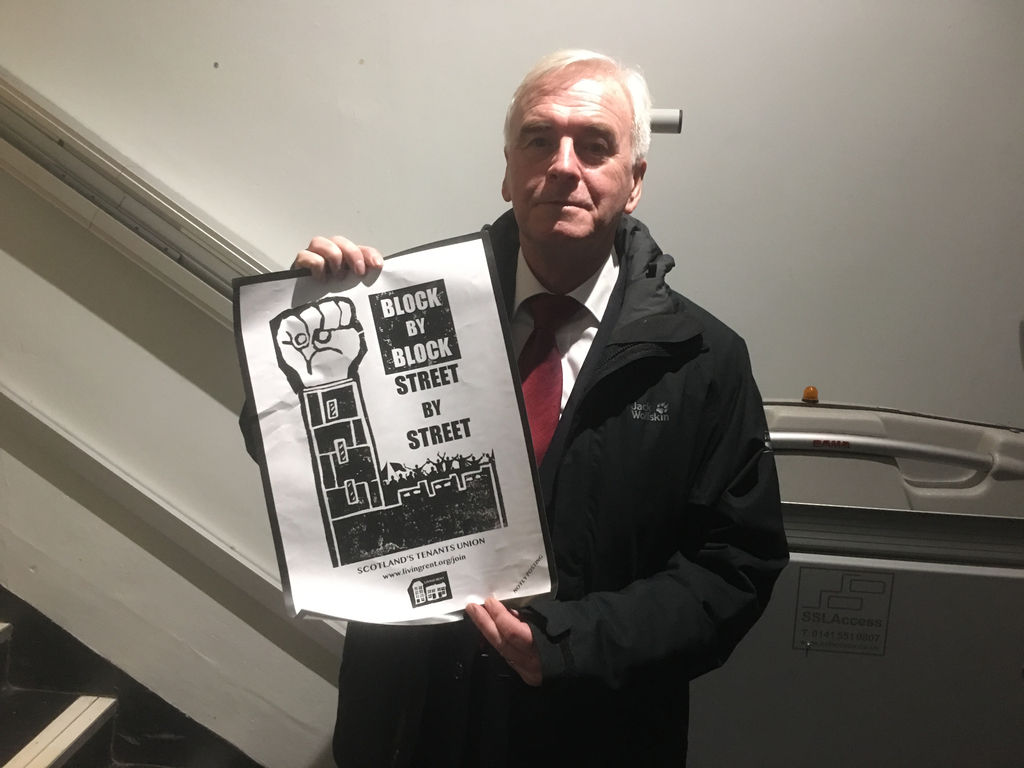 SHADOW CHANCELLOR John McDonnell joined striking lecturers and students at Strathclyde university on Friday as they held a ‘teach-in’, saying mass campaigns such as the current pensions dispute in higher education and other anti-cuts campaigns will eventually “bring the current government down” and elect a socialist into Number 10.

At the teach-in, McDonnell said that a few years ago he thought it “unimaginable” that a socialist could be elected prime minister but that the election of Jeremy Corbyn had changed his view.

McDonnell told the group that mass social movements against cuts, such as the pensions dispute, would “bring this government down” and “elect a socialist into Number 10”. Students, he said, should continue to show solidarity and support to this campaign and play an active role in anti-cuts campaigns across the UK.

The lecturers are on strike over a dispute in their pension settlement. They say a change in the way their pension is valued could leave them up to £10,000 a year worse off in retirement.

Speaking to CommonSpace after his speech, McDonnell said that through investment in education students receive a high-quality education: “What we have said is that you have to invest in education.

“The most important investment is in the staff themselves, that way you can ensure students come away with a broad education that equips them for life.”

“If you cut their wages and conditions, and now you come for their pensions, it undermines that ability to recruit.” John McDonnell MP

McDonnell said that the threat to staff pensions was undermining the ability to provide a good education: “Eventually staff do have to fund a standard of living for their families.

“If you cut their wages and conditions as has happened over a number of years, and now you come for their pensions, it undermines that ability to recruit.”

McDonnell was critical of the university bosses’ representative, Universities UK (UUK), which has so far refused to negotiate with the lecturer’s union, the University and College Union (UCU).

The MP, who was appointed shadow chancellor in September 2015, highlighted the work Strathclyde and other Scottish universities have done to address the issues of social mobility but said cuts undermine that: “This dispute flies in the face of everything that education is all about.

“It means if you don’t get the right staff and look after them, you hurt the most deprived kids who want an education.”

When CommonSpace asked what McDonnell would be doing today if Labour was in Government, he said that he would tell vice chancellors to “get round the table and negiotiate”.

“The solution is to elect a Labour government that scraps tuition fees altogether”. John McDonnell MP

Around 80,000 students across the UK and in Scotland have signed petitions calling on a resolution to the dispute, with some demanding that their tuition fees be refunded.

When asked about the proposals for a refund of tuition fees, McDonnell said: “The solution is to elect a Labour government that scraps tuition fees altogether”.

UCU Scotland official Mary Senior said that the visit from the shadow chancellor had been a “huge boost” to the campaign alongside cross-party support. Senior said the union had a “positive” meeting with the Scottish Government’s higher and further education minister, Shirley-Ann Sommerville, on Monday.

Sommerville repeated calls by the union for negotiations between lecturers and UUK after the meeting.

UUK says the lecturers’ pension scheme has a current deficit of around £6.1bn, which it says must be reduced. A spokesperson said: “Union leaders need to listen to the concerns of the Pensions Regulator and USS.  Pensions risk is very real.  Their dismissal of the funding challenges is hugely concerning.

“This industrial action is targeted at students. It will be young people and the next generation of students who will also suffer if their education deteriorates because employers are forced to make cuts to pay more into pensions. Employers are committed to continuing to pay in 18 per cent to staff pensions for the next five years, double the private sector average.”

McDonnell will be in Scotland until Sunday, and a senior insider said he would be campaigning across Scotland as part of a national campaign effort before visiting Glenrothes on Saturday evening.