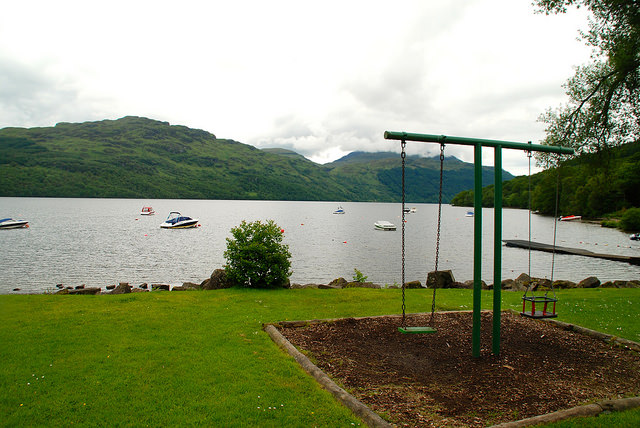 Local council leader: “My previous position was in favour of the principle being established but then looking at the detail at the later stage it no longer made sense.”

CAMPAIGNERS have branded the proposed development of a new tourist resort at Loch Lomond a “land grab”, after a packed out local meeting about the Scottish Enterprise plan changed the local council leader’s mind.

Scottish Enterprise has appointed Flamingo Land Limited as the preferred developer for its 20-hectare site at West Riverside, Balloch, in Loch Lomond & The Trossachs National Park, and the company – famous for its theme parks – recently purchased the adjacent 12 acre Woodbank site for future development.

A petition against the development has attracted 35,000 signatures, and Alannah Maurer from the Save Loch Lomond local campaign group described the development as a “land grab”.

“Scottish Enterprise should not have the right to sell public land,” she said.

Maurer added: “This area is a national park therefore it is for the nation to decide what best fits their park, yet there has been no national information campaign undertaken by any of the bodies concerned to inform the public of this proposed development.

“The land sits within the boundary of the Loch Lomond and Trossachs national park and is a renowned world beauty spot, an area of peace and tranquillity which has been enjoyed by locals and tourists for free.

“We wish to retain the land, the shore and water access, the woods and our rights to this land for both locals and visitors for future generations to come.

“Flamingo Land is not the best fit for a development within a national park and will do nothing to enhance the visitor experience at Loch Lomond.”

Loch Lomond and The Trossachs is one of Scotland’s top tourist destinations and in the past five years alone attracted 1.5 million visitors, containing 21 Munros, 57 nature conservation sites and two forest parks.

Flamingo Land Limited’s proposal would include lodges, a boutique hotel, hostel and glamping pods together with a range of family-based attractions and restaurants.

“We wish to retain the land, the shore and water access, the woods and our rights to this land for both locals and visitors for future generations to come.” Alannah, Save Loch Lomond

A report from the Daily Record in 2016 claimed that there could be a theme park within the development, but Scottish Enterprise denied this when contacted by CommonSpace, and said: “The development at West Riverside holds huge economic potential not only through job creation but also in securing Balloch as a key tourism destination.  It is important to note there are no plans for a theme park and any proposed development would be in keeping with the National Park and its natural beauty.”

The Scottish Enterprise spokesperson said they were sympathetic to public fears and are encouraging dialogue.

“As part of this process, we would encourage everyone to have a look at the plans online and feedback any comments.  Community engagement and consultation remains a key part of the master planning process,” the spokesperson said.

The Loch Lomond and The Trossachs National Park Authority (LLTNAP) have also said they are keen to hear the views of the public and say that these views will be considered throughout the decision-making process, which is still ongoing.

LLTNAP said: “We would encourage anyone who would like to comment on the proposal to contact us directly, so their views can be taken into consideration during the decision-making process.

“Members of the public can comment on the application either through our e-planning portal, or by emailing or sending a letter to our headquarters before 27th June which is the statutory deadline. However, the consultation period will remain open, and public comments can continue to be submitted until Officers make a recommendation on the proposal.”

“The public meeting was filled with around 200 passionate local people, all of whom have very real concerns with the plans.” Jonathan McColl, local council leader

Jonathan McColl, SNP Leader of West Dunbartonshire Council, is one person who will be challenging the development after attending a public meeting arranged by Balloch and Haldane Community Council last night [19 June]. 167 locals went along to the meeting, including campaigners from Save Loch Lomond.

McColl said: “The public meeting was filled with around 200 passionate local people, all of whom have very real concerns with the plans. Those who spoke did so in a clear and constructive way and convinced me that there are issues here that will not be resolved at detailed planning stage.”

Listening to the locals led to McColl changing his mind having previously been in favour of the project.

“My previous position was in favour of the principle being established but then looking at the detail at the later stage it no longer made sense. I want to thank everyone who took time to come along and express their views. It is now my intention to submit an objection to the application through the National Park Planning website,” he said.

Readers who want to keep abreast with the campaign groups plans can find them here.