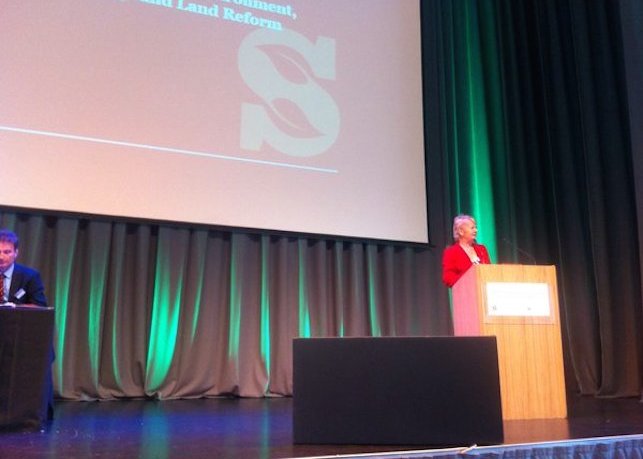 OWNERSHIP OF SCOTLAND needs to be made more diverse, according to the new cabinet secretary for land reform Roseanna Cunningham MSP.

Cunningham was speaking to Scottish Land and Estates (LS&E) conference, where she was challenged at the land owners’ event over the government’s land reform agenda.

Cunningham rejected claims that the ownership of land by a tiny, wealthy clique was irrelevant to the public interest, and issued a wake-up call over the need to recognise why communities “agitate” to buy-out land.

“Yes I do think land ownership in Scotland has been and continues to be too concentrated,” Cunningham told the conference.

“You can’t divorce the issue of land use and land ownership…when land ownership changes, it can change things remarkably,” she added.

Cunningham said the ongoing land reform debate was partly as result of the concentration of land ownership, and how this has impacted communities in Scotland.

While one audience member warned that the debate had made landowners feel “unloved”, Cunningham said there was a need to recognise that some communities “are feeling ignored” while “their need or concerns are not being catered for” on the land they live.

With people “left out of decision making about their future it is understandable that they agitate for a change,” she said of community buy-out efforts.

However, SL&E chair David Johnstone rejected concerns over the ownership of land – claiming that a disparity in the productivity of land is a reason for large scale land ownership.

Cunningham was given the new position of cabinet secretary for the environment, climate change and land reform as part of the post-election government reshuffle. She was previously the SNP spokesperson on land reform during the passage of the 2003 Land Reform Act.

When asked by CommonSpace, following her speech, whether she would consider developing plans for a land tax, Cunningham said any tax plans would have to be discussed in co-operation with tax minister Derek Mackay.