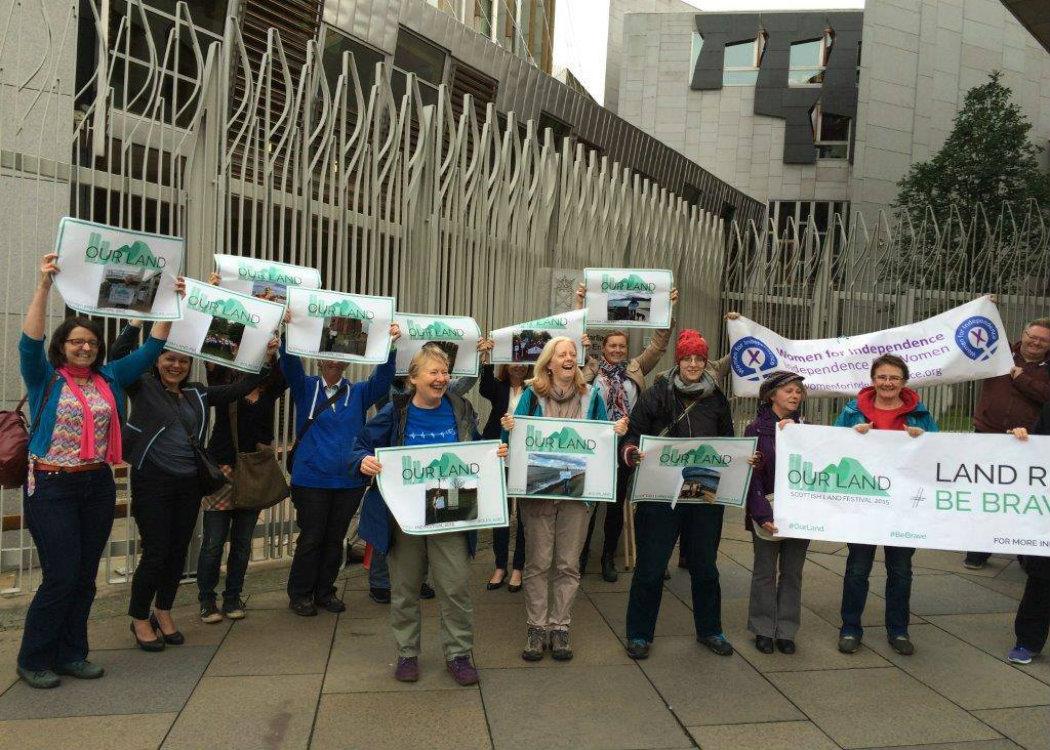 DISCARDED PROPOSALS to deal with land owned in tax havens should be reinstated within the Scottish Government’s Land Reform Bill, according to campaign groups.

Members of the public responding to a government consultation earlier this year backed plans to require all land in Scotland to be registered within the European Union in a move that would bring greater transparency over possible tax avoidance and land ownership.

This week the Rural Affair, Climate Change and Environment (RACCE) committee was left unconvinced by the government’s explanation for dropping the measure from the bill.

Government officials could not confirm whether 750,000 acres – an area larger than Ayrshire – is owned in offshore tax havens.

Today [Friday 4 September] activists will gather on the failed Waterfront development , Edinburgh, which is registered in the British Virgin Isles – a “secrecy jurisdiction” – which prevents information on who owns the land.

Jen Stout, a campaigner with the Scottish Land Action Movement (Slam), told CommonSpace: “We have to ask how it can be possible that vast swathes of our land in Scotland are registered in secretive tax havens. Land is a fundamental resource, not some speculative asset for the super-rich to collect.

“A simple mechanism to tackle this was proposed by the Land Reform Review Group; it is extremely disappointing to see it dropped from the Scottish Government’s Land Reform Bill. Seeing as 82 per cent of respondents to the consultation supported this measure, and that opposition came from the wealthy landowning lobby, we see this as a crucial test of the Scottish Government’s willingness to stand up to vested interests and implement the changes the majority want to see.”

The Land Reform Review Group and tenant farmers called for a maximum limit on land ownership, action on derelict land, and an absolute right to buy for tenant farmers. None of these proposals made it into the bill, which is now facing criticism in parliament from SNP, Labour and Green MSPs.

“It’s a shame the SNP are so timid [on land reform].” Simon Brooke, Land Reform Campaigner

Andy Wightman, a long-time researcher and campaigner on land ownership, said: “The committee hearing was very disappointing in relation to the question of land and property in Scotland owned by companies in offshore tax havens.

“Poor questioning and a long rambling non-answer from Scottish Government officials did nothing to inspire confidence that this matter is going to be subject to the scrutiny it badly needs. On the day that Private Eye published detailed maps of all land in England and Wales owned by offshore companies, it was a shock to hear that the Scottish Government is unable to confirm that around 750,000 acres of land in Scotland is owned by such companies.

“This is a figure I published in 2010 and is verifiable from data held by the Registers of Scotland. We are still none the wiser as to why Scotland cannot and will not contribute to UK and European efforts to eliminate the tax evasion, avoidance and secrecy associated with offshore tax havens. It appears from a statement earlier in the week that because the EU is not doing enough we will do nothing.”

Wightman and RACCE committee chair Rob Gibson MSP have both expressed concern that action at Westminster on corporate transparency is not being fully emulated in Scotland.

Simon Brooke, who led the Birnam Land Conference, added: “In brief, it’s a shame the SNP are so timid.

“If we had a progressive land tax, and treated all lands where we couldn’t establish who the beneficial owners were as one holding, it would solve the problem overnight, because the tax on those lands would be ridiculously higher than it would be if the ownership was transparent. We do have the power to do that. However, it’s not something you can explain in a media soundbite, and it’s not something this useless government would have the courage to do.”

However, CommonSpace recently revealed fears that the legal directorate of the Scottish Government is responsible for holding back reform .

Sources and politicians expressed concern that action on land reform could be open to challenge under the European Convention on Human Rights.

The RACCE committee has now given the Scottish Government bill team, responsible for writing the land reform legislation 20 questions or points of clarification to reply to by Thursday 10 September.

In two days campaigners for reform have received over 1,000 signatures in support of greater action on land reform.

The RACCE committee will take further evidence in Skye on Monday 7 September as scrutiny of the bill continues.