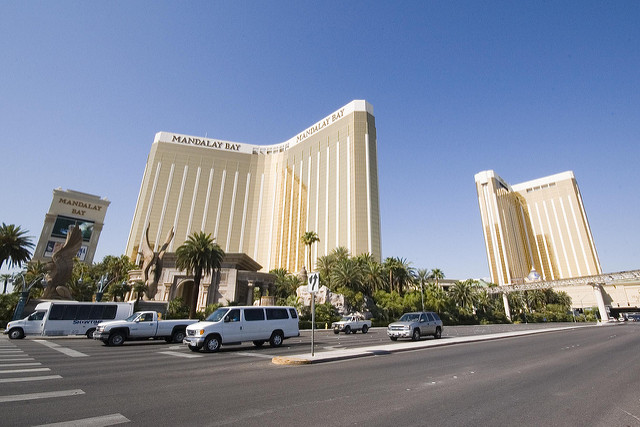 59 people killed by gunman at a Las Vegas music festival

AS MORNING BROKE over Las Vegas on Monday, it did so in the aftermath of what is now the worst mass shooting in modern US history.

The horror unfolded as shots were fired indiscriminately towards the crowd for a sustained period, which some eyewitnesses said felt like 20 minutes. When a Police SWAT team finally located the gunman – in a hotel room with a cache of 23 weapons – he had already turned the gun on himself.

US President Donald Trump said in a statement: “We pray for the entire nation to find unity and peace, and we pray for the day when evil is banished and the innocent are safe from hatred and from fear.”

Authorities have ruled out terrorism as a motive, despite early claims by ISIS that it was behind the attack, reviving the debate over whether or not “terrorism” is becoming shorthand for Muslim related violence in US political discourse.

Human rights lawyer Aamer Anwar told CommonSpace: “The investigation’s not complete, so I think it’s premature for the police and authorities to simply turn around and say this is not terror related. How do they know? They don’t know the motive yet.”

“Let’s say it had been a dark-skinned Muslim that carried out this attack, what would the response have been then?

“There seems to be remarkable abject silence from those normally screaming from the rooftops to take action.” Aamer Anwar, human rights lawyer

“I suspect the response would have been very different from what we’re seeing, because there seems to be remarkable abject silence from all those that are normally screaming from the rooftops to take action. Yet on this occasion they say ‘it’s premature, it’s sickening, nobody should be making any political statements’.”

Mr Anwar said he didn’t personally believe that the attack should be classed as terrorism, but pointed to the fact that Nevada state law does define an Act of terrorism as: “Any act that involves the use or attempted use of sabotage, coercion or violence which is intended to cause great bodily harm or death to the general population.”

The events of Sunday evening have also thrown into sharp relief questions over the United States’ relationship with gun violence – according to figures from the Gun Violence Archive, this was just the 29th in a series of mass shootings in the US in a single month.

Gun laws in the US are highly contentious and fiercely defended by right wing lobbying groups such as the National Rifle Association (NRA), a group which former Presidential candidate Hillary Clinton directly criticised in the wake of Sunday’s shooting:

The crowd fled at the sound of gunshots.

Imagine the deaths if the shooter had a silencer, which the NRA wants to make easier to get.

The law to which Clinton was referring is the so-called Hearing Protection Act, which would – effectively – do away with the background checks, fingerprinting, $200 fee and registration which currently accompany an application to obtain a silencer in the US. At the time of this article’s release, the NRA is yet to release any statement on the events of Sunday night.

Vigils were held in cities across the world Monday night, when national and international landmarks went dark in a show of respect for those who were killed.