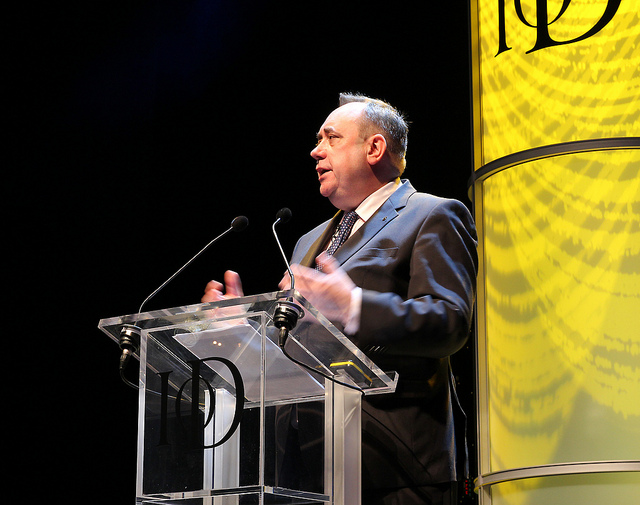 Leah Franchetti (@leahfranchetti), vice-chair of the Shettleston Labour Party and on the steering group of the Scottish Labour Women’s Movement, argues that media reporting of the Alex Salmond sexual harrasment allegations has been unedifying, and raises questions about the extent to which the culture within news rooms – still dominated by men – has changed

ON SATURDAY, Alex Salmond was accused of touching a woman’s “breasts and bum” in a “boozy Bute house bedroom encounter” in the Daily Record. The Scottish Sun claimed that Salmond was now a “laughing stock”. I wouldn’t expect to see either form of words as a contender for best joke in Edinburgh this month.

Before you dismiss my criticism as tabloid-bashing, the broadsheets were little better. Friday’s Matt cartoon in the Telegraph pictured two pandas in Edinburgh Zoo saying that the Scottish Government could not accuse them of inappropriate behaviour. Obviously the infertility of pandas is directly comparable to allegations of sexual harassment.

What made me uncomfortable though was the carnival of testosterone which was Salmond’s press conference on Friday. On social media we’ve seen pictures of the marquee in the Champany Inn with Salmond and Scottish political press. With the exception of a solitary female journalist, we were confronted with a group of blokes perched around a table in a place which resembled a hipster bar, rather than somewhere befitting the seriousness of the situation.

If the glaring disparity in gender balance in the room wasn’t enough, reports of the event would suggest that Salmond (who addressed everyone as ‘guys’) took part in a quick-fire round of “Can we get you to say something a bit titillating?”. He also answered questions about whether he had made any women uncomfortable, or if he could deny he was a ‘groper’. A Times Scotland journalist who was in the room wrote that this spectacle was “journalism as a blood sport”.

It is nearly a year since #metoo moved from social media into a topic of conversation in workplaces and social occasions. I know many men have considered their behaviour past and present in light of the debate but the events of the last few days caused me to wonder if this has been anything more than a superficial exercise.

Salmond has denied all the allegations and we don’t know how the details of the women’s claims became public. What we do know is that they are serious. The implications are serious and the reporting of them should be taken seriously. I’m not convinced that all sections of the media did that.

I’m not a journalist. I don’t have to work to print deadlines or worry about getting a ‘top’ line. I don’t have a concern that my work has to be sufficiently different from that of a rival or how it will perform in search engine algorithms. I appreciate this story is significant. It will continue to lead the headlines and bulletins for many months to come. I’m sure that for the journalists in that room on Friday, the opportunity to get up close and ask anything of a former First Minister was a unique moment. We’re increasingly used to seeing staged-managed politicians who think being ‘open’ with journalists means re-wording the soundbites they’ve learned from their respective press offices.

Salmond is famed for being a showman. After over 30 years in front-line politics you can be sure he knows how to handle journalists and would have been well prepared with his ‘lines to take’. I’m not sure how I’m supposed to feel about the fact that the former FM was “calm and resolute”, without “a single bead of sweat” visible. After all, the former MP was being asked a series of predictable questions at an event he’d called, under the canvas of his choice with the attention he craves. It was hardly the Krypton Factor.

We don’t know how the women at the centre of these allegations feel, but we do know that Salmond has the resources to launch court action and summon the ‘guys’ along for a chat, albeit with dictaphones and notepads. And none of us needed to know the graphic details of the allegations which read almost as if the women were a mere detail in a much ‘juicier’ political tale.

I’d like to think that next time (because there will be a next time) journalists might reflect on how they report stories like this. The public expects ‘tabloid’ reporting because that is what they are given. When Women in Journalism Scotland tell us that two thirds of respondents have suffered lewd or sexist behaviour at work, you have to wonder what the office culture is like. After all, this is the same office culture that gives us “boozy bedroom encounters”.  I suspect there would be a shift if there were more women in the teepee in the first place. It was never meant to be a blood sport guys.