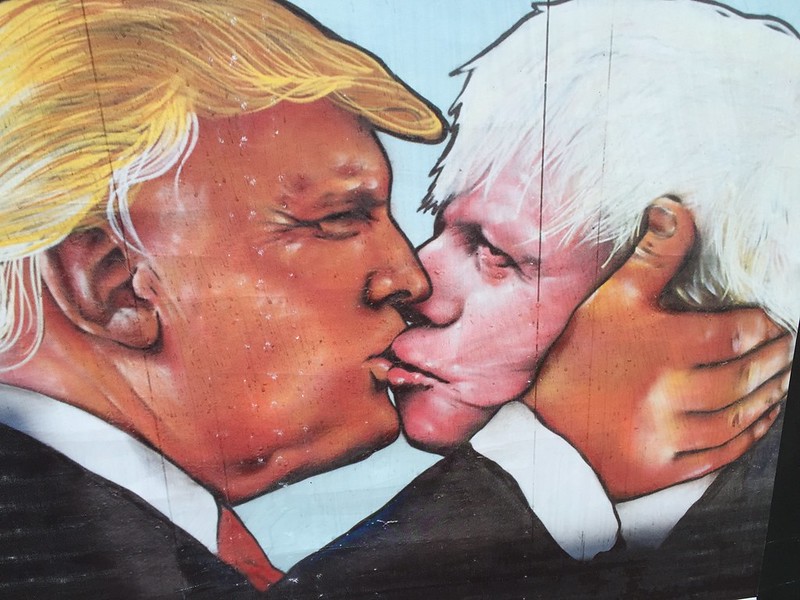 LEAKED DOCUMENTS from secret negotiations over a post-Brexit free trade agreement with the United States have revealed the US Government is pushing for as hard a Brexit as possible, according to an analysis by Global Justice Now.

Previously redacted documents revealed in full by UK Labour leader Jeremy Corbyn on 27 November have confirmed the details discussed in bilateral trade talks between US and UK officials since 2017.

Labour have used the documents to double down on accusations that Prime Minister Boris Johnson and the Conservatives were “misleading” the public on their “secret plans to sell off the NHS”.

The documents reveal that US officials had pressured the UK Government to move toward as hard a Brexit as possible, with complete divergence from EU regulatory standards and closer alignment to the US, in order to allow American corporations complete access to the UK market.

A hard Brexit and US regulatory alignment

Campaign group Global Justice Now said the leaks revealed trade talks were entirely on US President Donald Trump’s terms, with US officials shown to have said any possibility of a trade deal would be off if the UK remained aligned with EU standards, as was proposed in the first deal secured by then-Prime Minister Theresa May.

On the wider NHS, the US told UK officials they wanted any trade deal to start from the baseline that everything is on the table unless it is ruled out, rather than specific areas being offered up for negotiation.

Despite repeated denials by the Conservatives, the leaks reveal that the NHS, and in particular drug prices, was a subject of negotiation as Trump has originally suggested in a joint press conference with Theresa May during a Washington visit.

The US currently pays more per capita for pharmaceuticals than any other country in the world, with reports of Americans frequently travelling across the border to Canada and Mexico to purchase life-saving drugs at a fraction of the price they pay in the US.

Meanwhile, the UK enjoys some of the most competitive deals with drugs companies due to the buying power of the NHS – a situation Global Justice Now said US officials indirectly referred to by suggesting the health service did not pay enough.

The National Institute for Health and Care Excellence and its counterpart in Scotland currently issue guidance to the NHS on the most appropriate, effective drugs it should use to treat patients, whilst also undertaking a cost-benefit analysis.

This means much more expensive medicines – usually new advanced drugs used to treat certain cancers – are not routinely available on the NHS without individual approval from a panel of experts – a system US officials appeared to want to change, so that major pharmaceutical companies could enjoy unfettered access to the UK market.

US officials also want longer patents for drugs made by US drug companies, limiting the ability of the NHS’s ability to prescribe cheaper but identical generic versions.

Central to the SNP’s manifesto is the NHS Protection Act, which could protect the NHS in law from such trade talks, and also give devolved parliaments a role in consenting to anything which could impact devolved health services.

Labour’s shadow secretary of state for health Jonathan Ashworth argued the Tories were trying to “play the public for fools”.

Ashworth said: “In these secret trade deal papers that Labour revealed yesterday, the NHS is very much on the table.

“And it’s crystal clear that the US is pushing for longer drug patents – which means massive drug price increases for our NHS. And on that basis, these papers show the UK is ready to move on to the next stage of a deal that will mean taxpayers will pay the price of soaring medical bills,” he said.

US negotiators also raised the UK’s current food regulation standards as a key issue, including offering the UK Government advice on how best to “sell” the idea of the infamous chlorinated chicken, which many consider emblematic of US food standards.

Currently, the UK operates a precautionary approach to food standards, with producers having to prove their products are safe before sale to the public. However, leaked documents reveal US and UK officials discussed the UK adopting the US approach of the Food and Drug Administration, where products were only withdrawn if evidence of harm could be proven.

Corbyn also told journalists that officials had discussed the UK’s approach to food safety labelling, with the documents showing the US objected to measures designed to tackle obesity, such as high sugar content labels.

Global Justice Now also highlighted sections of the documents which show the US banning mention of climate change in trade talks, in line with Trump’s infamous scepticism of climate change, despite the overwhelming scientific evidence.

After the UK raised the issue, the documents report the US trade representative said “emphatically” that climate change was a “lightning rod issue” for the US, and that mention of greenhouse gas reductions could not be made in any trade agreement.

With discussion on action to tackle to climate emergency becoming an increasingly important topic to UK voters, the government will come under intense political pressure not to agree to any trade agreement which would block action on the climate.

Global Justice Now have also highlighted sections of the documents where the US had demanded protection for tech giants such as Facebook, prompting fears that despite increasing pressure worldwide for social media platforms to take responsibility in respect of misinformation, any action could be prevented by a trade deal.

Ultimately, the US wants to introduce a system of trade courts which would settle disputes after a free trade agreement, but which could also be used by big corporations to sue the UK Government for actions which restricted their access to the UK market.

Global Justice Now branded the leaks as “TTIP on steroids”, a reference to highly controversial and secretive talks for a so-called transatlantic trade and investment partnership between the EU and US which many feared would have opened up the EU to many of the same risks the UK now faces.