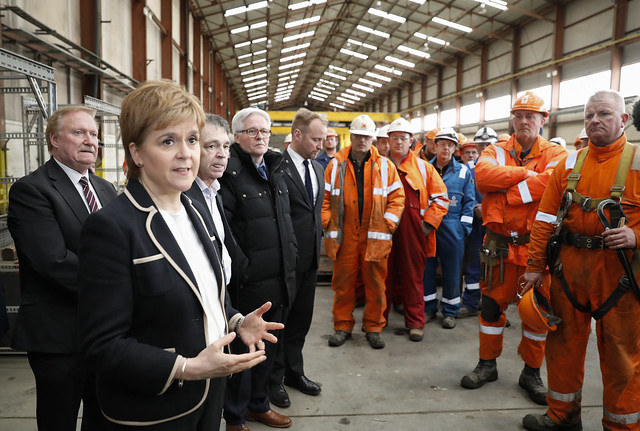 PROMISES of a green jobs boom in Scotland have not come to fruition due to a “failure of industrial policy”, a new report by the STUC has found, warning the Scottish Government that they are not immune to “the risks” of a Gilets Jaunes-type revolt if a low carbon transition is not carried out in a way that benefits most Scots.

The STUC report, ‘Broken promises and offshore jobs’ – which urges the Scottish and UK Governments to take a more interventionist approach to ensure a just transition to a low carbon economy – found that repeated predictions of successive Scottish governments of new green employment had “not translated into the jobs boom promised”. Consequently, the low carbon economy was “characterised by overseas financial interests, a limited industrial base and precarious work,” the report concluded.

“This is a failure of industrial policy that means workers, businesses and Government in Scotland do not benefit from Scotland’s natural resources. It has serious implications not only in in terms of jobs but also in terms of tax revenues, transparency, and economic democracy.

“Scotland can do better. A proper industrial policy considering procurement, planning, licencing powers, public ownership and investment must be pursued if we are not to repeat the mistakes of the past.”

The report comes as First Minister Nicola Sturgeon called for a “Scottish Green Deal” in her speech to the annual congress of the STUC in Dundee on Wednesday [17 April], echoing similar calls for a public investment-led economic transformation to a low-carbon economy popularised by left political figures such as Democratic congresswoman Alexandria Ocasio-Cortez in the United States.

The STUC report found that the prevalence of foreign ownership and the over-reliance on foreign direct investment was hindering such a transition from happening in Scotland. The report found that the Scottish Government had “heralded inward investment” into the low carbon economy “without the requisite focus on socio-economic benefit for workers and communities”.

The report also found that flawed policy-making has led to “the failure to build a domestic industrial base” in the low-carbon economy, with the trade balance between imports and exports jumping from minus £89 million in 2014 to minus £229 million in 2017, with plans for a national energy company described as “far too timid”, saying that it “will do little to change the generation mix or the nature of ownership” within the low carbon economy under current plans.

The new Scottish National Investment Bank, the report found, was “an opportunity for public investment to build and capture value” in the low carbon economy.

Citing the case of the Gilets Jaunes in France, a revolt instigated by a new fuel tax which replaced the more redistributive wealth tax, the STUC argued that “while climate change is seen as primarily a left-wing or progressive issue as it impacts on the poorest most, the policy response has not necessarily been left-wing or progressive.”

“As well as the industrial issues outlined above, Macron’s fuel tax rise which triggered the rise of the Gilets Jaunes, points to the risks when environmental policies are pursued within a neoliberal agenda where the costs are passed onto the working class.”

STUC General Secretary Grahame Smith said: “Reducing carbon emissions in Scotland will involve hard choices, and the trade union movement is where these hard choices have to be resolved.

“Carbon reduction will only come from economic and social change on a massive scale. Work will be transformed, and that comes with uncertainty and risk. Protests in France demonstrate that attempts to place the burden on workers comes with serious consequences, and the Scottish Government must know that it is not immune to these risks.

“Equally, commitments to new jobs and policy reforms have failed to materialise time and time again. Scotland’s unions each have a different stake in this debate, but they are clear that market-driven policies are not the answer. Interventions in research, education, industry and ownership – as well as international cooperation – are crucial components of any just transition to a low-carbon economy.”

Salomé Saqué, a French journalist who has covered the Gilets Jaunes protests, stated ahead of the report’s publication: “Macron’s folly was to believe that he could place the burden of carbon reduction on the poor, the workers and the dispossessed of France, who have risen up and are currently forcing the government to think again. But the brutality of his government, his favours to finance and big business, and the violence inflicted on yellow vest protesters in France must be seen as a warning to the people, trade unions, and to any kind of political opposition across Europe.

“Government platitudes are useless at best, and often dangerous. Economic change, the ecological requirements that have to be implemented to improve workers’ lives, must be fought for and won in unions, communities, and before anything, on the streets.”

Pete Cannell from Just Transition campaign group Scot.E3 added: “The STUC’s report is a very important and welcome contribution to the debate on the transition to a low carbon economy that we need. Market forces have failed – currently carbon emissions are increasing at an unprecedented rate.  So an industrial strategy that builds the capacity for transition is essential.

“Trade unionists and environmental activists share a responsibility to win support for the practical steps that are required to achieve the necessary transition.  A vertically integrated state energy company under public control is essential.”

Craig Dalzell, head of policy & research at the Common Weal think-tank, which has advocating for a Green New Deal, commented: “This report from the STUC rightly highlights that previous promises have failed to materialise or have led to multi-national companies eating up the space to develop Scotland’s resources for the benefit Scotland’s people. Whilst Scotland has a wealth of renewable resources, we are far too reliant on companies outwith Scotland providing the hardware – wind turbines and solar panels are largely not built in Scotland.

“The great power of the upcoming Scottish National Investment Bank will be to allow investment in these things but it must be backed by a solid industrial policy based on development of capacity and in rooting that capacity in Scotland. It will do Scotland no good if public money goes into building companies only to see them bought up and shipped out in the name of ‘foreign direct investment’.”

Responding to the report’s publication, a Scottish Government spokesperson said: “In 2017, the Scottish low carbon and renewable energy sector supported over 46,000 jobs, and generated over £11 billion in turnover. This is a significant result and confirms our commitment to ensuring that Scotland maximises economic opportunity of the transition to a low-carbon economy.

“We recognise that the transition to a carbon-neutral economy brings both economic opportunities and challenges. We have established a Just Transition Commission to provide Ministers with practical advice on promoting a fair, inclusive jobs market as we move to a carbon-neutral economy. We want constructive dialogue to be the central pillar of our approach to Just Transition.

“Finance Secretary Derek Mackay will also co-host a summit in May with UK Energy Minister Claire Perry which will bring together trade unions, offshore wind developers, supply chain companies and government to look at how UK companies can benefit more from the build-out of offshore wind farms in UK waters.”