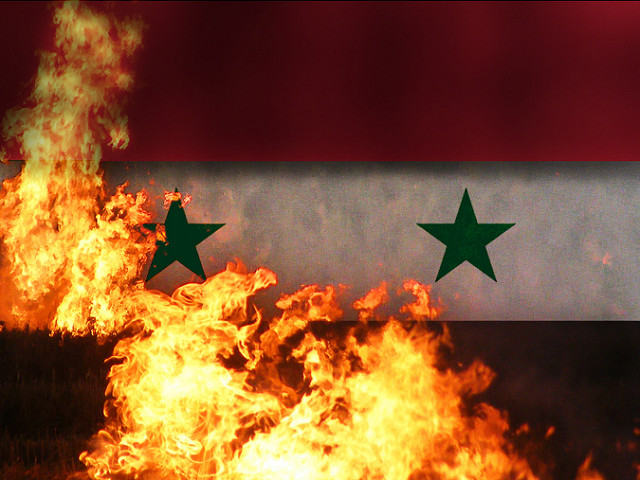 Alex Salmond has joined Jeremy Corbyn in expressing doubt over who was responsible for the chemical weapons attack, despite Theresa May’s declarations of certainty over the Syrian Government’s culpability.

Speaking in a video published the National newspaper, Salmond said: “One other lesson lost from Iraq is the importance of letting the process of international inspection complete before military action.

“We don’t know for certain which chemical weapons were used in Douma last week and certainly not by whom.”

Salmond, who opposed the Iraq War while leader of the SNP, is not the first to draw comparisons between widespread claims by Western governments and NGOs that the government of Bashar al-Assad had employed chemical weapons against his own people in Douma, and the ultimately untrue reports of weapons of mass destruction which were used to justify the 2003 invasion of Iraq.

Salmond went on to echo the concerns of UK Labour leader Jeremy Corbyn, who posed similar questions in the House of Commons on Monday: that the use of chemical weapons, if proven, might be the responsibility of one of the many other military and paramilitary forces participating in the Syrian civil war.

“One other lesson lost from Iraq is the importance of letting the process of international inspection complete before military action.” Former first minister Alex Salmond

Salmond continued: “Assad, jihadis and Daesh have all used them in this Syrian civil war. They all have form in the grisly book of war crimes.

“The Syrian government certainly has the means but the motivation could lie elsewhere.

“Two weeks ago, Assad was winning the civil war hands down and the president of the USA was publicly declaring his intention to withdraw from the theatre.

“Now Assad’s conduct is under fresh international scrutiny and the Yanks are not just coming but they are staying.”

Salmond did not rule out the possibility of Assad’s guilt, but said: “If the attack was the work of the Syrian Government, it represents not just another outrage but an own goal of epic proportions and Assad should be placed on trial for stupidity as well as war crimes.

“In any case, the correct policy for anyone wishing to uphold rather than undermine international law is to wait for the information, take your case to a democratic parliament and to the United Nations and work for peace.”

Salmond’s latest remarks may indicate that Theresa May’s statements before the House of Commons on Monday have not settled the issue throughout the mainstream of UK politics.

Describing the attack on Douma, May described “innocent families – seeking shelter in underground bunkers – found dead with foam in their mouths, burns to their eyes and their bodies surrounded by a chlorine-like odour.

“Children gasping for life as chemicals choked their lungs. The fact that such an atrocity can take place in our world today is a stain on our humanity.”

May continued to assert: “And we are clear about who is responsible.”

Despite this, the fact that the Organisation for the Prohibition of Chemical Weapons (OPCW) had not yet conducted an investigation of the Douma site was repeatedly raised by MPs.

The OPCW was scheduled to send a team of investigators via its Syrian delegation on 10 April, but has been delayed by both pending security concerns and, the Syrian and Russian governments claim, by the impact of the recent UK/US/French airstrikes on Syrian facilities, intended to “degrade” the Assad government’s chemical weapons capabilities.

The Prime Minister argued yesterday that the delays were part of a concerted effort by Syria and Russia to frustrate any actual investigation of the Douma attack by the OPCW.

Similar accusations of obfuscation and disinformation have faced Russian foreign minister Sergei Lavrov, who claimed this week that Russian experts have already inspected the site of the alleged attack in Douma, and have found no trace of chemical weapons.

Lavrov went on to claim that the Russian Government has “irrefutable information that it was another fabrication”. He went on to say that “intelligence agencies of a state that is now striving to spearhead a Russo-phobic campaign were involved in that fabrication.”

However, the Russian Government has not offered any proof to back up Lavrov’s claims.

“Which version of events are we to believe?” Journalist Robert Fisk

Nevertheless, the questions of Salmond and Corbyn have been given further relevance by a recent report from the veteran international correspondent Robert Fisk, who described in the Independent a meeting with a Syrian doctor who both confirmed that video footage of the victims of the Douma attack was “perfectly genuine”, but attributed the victims’ condition not to gas exposure, but to oxygen starvation in the tunnels and basements where they sought protection during heavy shelling.

Fisk wrote: “As Dr Assim Rahaibani announces this extraordinary conclusion, it is worth observing that he is by his own admission not an eyewitness himself and, as he speaks good English, he refers twice to the jihadi gunmen of Jaish el-Islam [the Army of Islam] in Douma as “terrorists” – the regime’s word for their enemies, and a term used by many people across Syria. Am I hearing this right? Which version of events are we to believe?”

Fisk noted that the World Health Organisation has said that its partners within Syria have treated 500 patients “exhibiting signs and symptoms consistent with exposure to toxic chemicals”, and that the French Government has also claimed to have proof of the chemicals weapons used. American media has also quoted unnamed sources verifying the use of chemical weapons by blood and urine samples.

Meanwhile, the apparent illogic of the Syrian Government using chemical weapons at a time when it enjoys relative military superiority was reiterated by Major General Jonathan Shaw, a former assistant chief of Defence staff, who during an interview on Sky News appeared to be cut off abruptly by the presenter after asking: “The debate that seems to be missing from this is – and this was actually mentioned by the ambassador – was what possible motive would have triggered Syria to launch a chemical attack at this time in this place?”