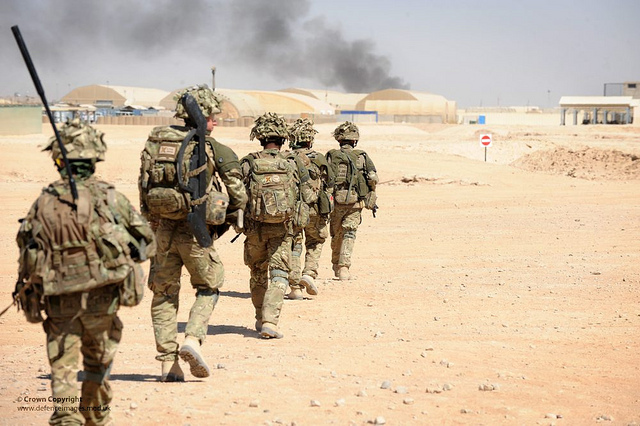 AN INDEPENDENT SCOTLAND should have a “triple-lock” on the deployment of its military, a new report from the pro-independence think tank Common Weal has argued.

Published today as part of the Common Weal’s White Paper Project and written by defence consultant Garry Macdonald, ‘Towards a Defence and Security Strategy for an independent Scotland’ proposes that the constitution of an independent Scotland should require the fulfilment of three criteria before the nation’s military forces could be deployed: a clear mandate under international law, an articulated strategy from the Scottish Government explaining how military action would support a political solution or prevent an imminent humanitarian crisis; and a vote in the Scottish Parliament to secure a democratic mandate for any such action.

Much pro-independence discourse over the past 30 years has been framed around opposition by the SNP, Scottish Greens, SSP and other notable pro-independence groups to illegal or unjustified military action. Widespread opposition to the 2003 invasion of Iraq has been credited by some with helping to deliver the SNP’s first Scottish parliamentary election victory in 2007. The SNP also opposed NATO actions in Kosovo in 1999 and British intervention in Syria in 2015.

“It is probable that a progressive foreign policy which avoids illegal wars and overt militarism could reduce the level of terrorist threat in Scotland.” Garry Macdonald, ‘Towards a Defence and Security Strategy for an independent Scotland’

The report further argues that the chief militarily-relevant threats to a newly independent Scotland would be non-state actors, such as terrorism and organised crime, and that a Scottish defence and security strategy should be oriented around such threats.

However, MacDonald writes, “it is probable that a progressive foreign policy which avoids illegal wars and overt militarism could reduce the level of terrorist threat in Scotland. Likewise, domestic policies which reduce socioeconomic disparities and intolerance could deprive home-grown terrorism of the fertile ground it needs in order to thrive.”

Hypothesising that negotiations between an independent Scotland and the rest of the UK could be operated on the basis of zero physical assets transferred, the asset value of Scotland’s share is calculated by the report at roughly £10bn. This could be used as a start-up fund with which to establish an equip an independent Scotland’s defence, the annual operating cost of which the report estimates as £1.8-2.5bn.

Regarding a recurring debate within left-wing Scottish nationalism, the report argues that, during an interim period following independence, Scotland should pursue ‘associate membership’ in NATO and the EU in order to accommodate specific arenas of mutual interest with those international organisations, while at the same time allowing for flexibility in foreign policy and the possibility of full membership in future.

Both NATO and EU membership have been sources of continuing disagreement within the independence movement: former SNP leader Gordon Wilson has argued that as many as 30-34 per cent of SNP voters also voted leave in the EU referendum, meaning the party’s generally pro-EU approach to independence does not reflect all of its supporters.

The SNP also voted to end their 30-year opposition to NATO membership in 2012, a decision which met with significant opposition from the party’s leftwing. Macdonald’s proposal could deliver a temporary compromise, but may not settle the issues entirely. MacDonald goes on to suggest that these matters would ultimately need to be decided democratically.

READ MORE: Geoffrey Martin: I quit the army over Iraq – I realised it was bullshit

“Both NATO and the EU have articles in their treaties which provide for collective defence,” Macdonald continues. “The international treaties to which Scotland would need to accede for membership in these organisations would confer demands and expectations on Scotland that might be viewed as contrary to its national interest. While providing access to resources and greater protection the responsibilities of membership would constrain national policymaking options. Therefore, given the implications, membership in such organisations should be subject to significant democratic debate and vote.”

Commenting on the report’s release, MacDonald said: “Issues of defence and security received comparatively little coverage during the last independence referendum. Consequently, the argument that an independent Scotland would be capable of defending itself was not as well formed as it could have been.

“The hope is that this will encourage more people with experience to contribute to the White Paper’s iterative process and build a stronger case for defence and security in a future bid for Scottish independence.” Garry Macdonald

“The intent of the paper is to get people thinking about what we mean by security, what institutions and capabilities Scotland would need and how we go about building them. The hope is that this will encourage more people with experience to contribute to the White Paper’s iterative process and build a stronger case for defence and security in a future bid for Scottish independence.”

Common Weal director Robin McAlpine also said of the report: “One of the oddest things about Defence from Scotland’s point of view is that we pay a disproportionately high amount for Defence by international comparison and yet the actual defence of Scotland is minimal.

“Rather than using the money for proper maritime patrols to prevent smuggling, terrorism, people trafficking and to monitor the activities of other nation states, we have virtually no defence around Scotland’s coast and spend all the money on counterproductive foreign wars instead. An independent Scottish defence strategy would cost us less, leave us substantially more protected and keep us out of illegal wars. These are great opportunities for Scotland.”