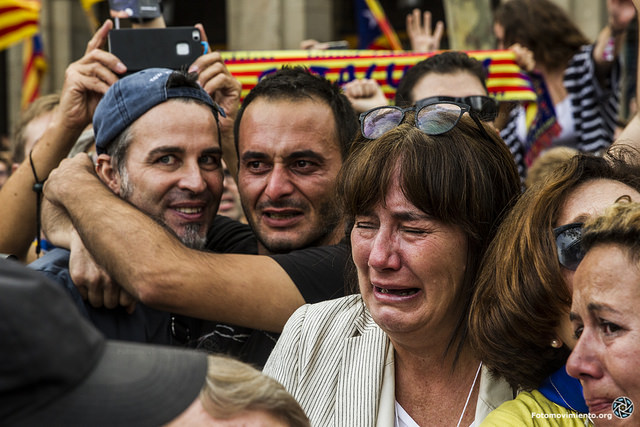 DELICACY. FROM OUR founding inception we are ingrained in the notion of delicacy. The idea that one drop, one misstep can shatter the prevailing order.

Similarly, we live in an increasingly delicate world with a feeling that democracy is often on the edge of shattering, a democracy that is increasingly used as a commodity that can be turned off as required rather than an international principle by which we should all abide.

As I write this I note that Catalonia has declared independence from Spain following a referendum which the Spanish Government tried to prevent – first through words and latterly with violence. Engaged with events, I felt a compulsion to travel to the region, speak to voters, and immerse myself in the politics of the area.

Democracy is delicate, particularly in modern democracies such as Spain, and it is therefore vital that democrats everywhere champion it.

The morning skies mist into light accompanied with the kind of inclement weather usually reserved for the outdoor concerts I attend; I feel curiously nostalgic for the comparatively Mediterranean north-east of Scotland.

Before I set off to visit the HQ of the ANC – the Catalan Assembly as opposed to the South African party, though the similarities are now uneasily striking – I am reminded of the potential illegality of my visit. All activities categorised as promoting the Catalan referendum are deemed punishable with imprisonment.

On consideration, with all the prior warnings relayed to me, I decide to travel. There is, of course, a degree of apprehension but I became active in frontline politics to advocate for democracy and equality, not to overlook cases of injustice in the face of state intimidation. I am nothing if not an internationalist and as anyone who adheres to the same values as me will attest, an infringement on democracy anywhere is an infringement on all of us. Adelante.

Entering this discreet, unassuming building, I am immediately confronted with a vivid collection of campaign paraphernalia: flags, banners, stickers, clothes, magnets, intricate bottle-openers – the Catalan movement is renowned for greater visceral visibility than their Scottish compatriots.

As well as the palpable political affinity, there is seemingly a social affinity between the Catalans and the Scots too.

After the dignitary greetings I am introduced to the dynamic press team, a collection of talented young minds – not one, I surmise, to be over the age of 30 – all utilising modern technology to promote Catalan self-determination. I am introduced, specifically, to the chief press officer, a Belgian national who orchestrates much of the social media output.

He interestingly informs me that, unlike Scotland, their campaigning is conducted primarily from above with the autonomous government setting the agenda and local groups coordinating independently to organise mass demonstrations, conveying the sense of movement so embodied by the people on the streets.

These local groups are, however, much more decentralised and free to organise demonstrations as they see appropriate – a degree of local flexibility we are not really familiar with in Scotland. As we continued our conversation on modern campaigning methods we touched on the era of big data, algorithms and the potential to target voters; I leave with the impression we are still in the infancy of harnessing this technology in Scotland.

I am immeasurably impressed with the innovative, tactical knowledge this group have with regards to the current political situation. “What’s your next step?” I probe. “When your enemy is making mistakes, don’t interrupt,” comes the reply.

We finally proceed to the press room to pose for the customary photographs and final handshakes. The hospitality provided to me, as an international diplomatic friend, is unwavering and I muse that, as well as the palpable political affinity, there is seemingly a social affinity between the Catalans and the Scots too. I feel energised ahead of the following day’s demonstration.

Following an afternoon spent exploring the wondrously nouveau Gaudi Park, I call a taxi to take me to the evening’s demonstration at Passeig de Gràcia in support of the two political prisoners – Jordi Sanchez and Jordi Turell, two of the movement’s most senior independence leaders. I have discovered, over time, that conversations with taxi drivers can be as productive as any conversation with those in political circles.

Access to such unfiltered opinions are an unequivocal gift to any politician. This one, in particular though, is revealing because the driver is so incredulous with the actions of the Spanish Government and their threat to trigger Article 155 of the country’s constitution, thereby ending the autonomy of the region. He tells me to expect in excess of 40,000 lining the streets; the reality is, in fact, close to double that.

I emerge from my taxi to an ocean of Estelades shimmering in the sky and thousands of Catalans draped in red and yellow. The atmosphere, positive and uplifting, is unmoved even by the sight of Spanish helicopters piercing the sky above us. As I become enmeshed in the crowd, I engage in a conversation with a group of women who have arrive from their university lecture hall.

It is impossible to not be touched and inspired by the cohesion, togetherness and resilience of this momentous campaign.

Interestingly, they had been rather indifferent to the independence question until the suppression of votes and brutality of police on the day of the recent referendum. Now they see independence as the only sensible, progressive option for Catalonia. This is a view I hear frequently during the trip.

I move forward and as the procession becomes more choreographed, the surrounding crowd, symbolically, join hands with each other and raise them to the sky: a moment laced with solidarity to the cause as well as defiance of Rajoy’s aerial helicopter. Tears stream from some – indeed some of the more mature demonstrators have waited decades for self-determination.

Supportive of a Catalan state or not, it is impossible to not be touched and inspired by the cohesion, togetherness and resilience of this momentous campaign.

Before I leave I meet with a former university colleague, now a qualified dentist, and assist her with writing a letter of application to study a Masters in Ghent. I am fortunate to have the ability to travel quite extensively, particularly across Europe, and enjoy the friendship of numerous friends around the globe. It was at this point, however, that Brexit made some sense me.

Travelling, studying and working across Europe is so normal to so many of our European neighbours. On reflection, a lot of Brits may have failed to truly grasp the range of opportunities available to them as European citizens. The internecine inevitability of leaving the EU, for England at least, is rather regrettable and in an interconnected world makes little sense.

As we finish our traditional Catalan meal and say goodnight I am contemplative as I prepare to leave the region. I am returning to Scotland, refreshed, with memories of new friends, political progress and fresh ideas.

The Catalan independence campaign is naturally distinct from the Scottish equivalent. As I’ve previously alluded to, their form of campaigning is intrinsically different to ours and takes into account the idiosyncrasies of their culture. As democrats, however, we have a responsibility to defend our neighbours in Catalonia and their right to decide their own future.

That is a responsibility, I’m grateful to say, has been lived up to with admiration by the Yes movement. For my part, I will always have an affinity to my colleagues in Catalonia. International social-democracy is in my blood; I will forever uphold the values that are dear to me.