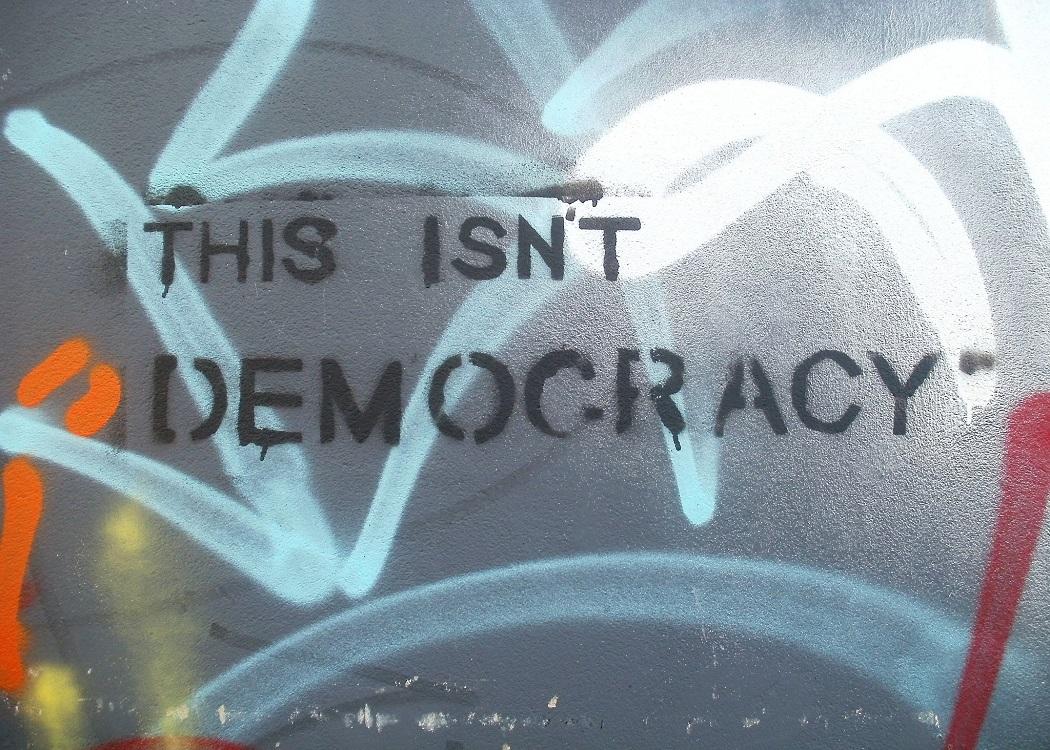 Writer Lesley Docksey from Dorset questions the structures of democracy in Britain today, and examines how the Scottish independence referendum helped push people to the forefront of the conversation

WITH A General Election looming in the United Kingdom and Spain possibly following Greece’s revolt against austerity later this year, we need to think, not just who or what we are voting for, but why we should vote at all.

People are suffering from a deficiency which is as unbalancing as a hormone or vitamin deficiency. What we are severely lacking in is democracy. Many of those pondering on the state of politics feel unhappy and somehow depleted. They haven’t yet realised it is democracy that’s lacking because they have believed what so many politicians have told them, over and over again: “We live in a democracy. Now exercise your democratic right and vote for us.”

But what is the point of voting if, no matter who you vote for, what you get is the same old, same old? Who do the British, and particularly the English, vote for in May, if none of the candidates can seriously offer what we want? Members of Parliament – or some of them – are becoming worried about voter ‘apathy’. The implication is that it is our fault we are not interested in their politics.

Who do the British, and particularly the English, vote for in May, if none of the candidates can seriously offer what we want?

There was a debate in Westminster Hall on 5 February – on ‘voter engagement’. These figures were quoted: 7.5 million people were not registered to vote last year. This year 8.5 million are not registered (with a projected 17 million by July, because of changes in registration rules), mostly not because they couldn’t care less but because, in the words of MP Graham Allen: “They are not connected with our democracy at all… those people have turned away from politics not because of any recent issues, but because they do not feel that it can do anything for them or that it is relevant to them… If the current trend continues, I am afraid that our democracy itself could be threatened.”

But what is ‘our democracy’ that we have turned away from? 38 Degrees surveyed its members on what they thought was wrong with the UK political system. Over 80,000 responded and in March 2014 David Babbs presented the results to the Political and Constitutional Reform Committee. Asked what would make them turn out and vote, the most popular response was having a “None of the above” box on the ballot paper.

There is a murmur that this would be discussed in Parliament – but not until 2016. Of course, Westminster will argue that we can’t have such a vote because it might produce a result that was in support of no party at all; and we must have a government, even if it is one we don’t want; and let’s forget that Belgium survived for some time without a government.

The concept of ‘democracy’ has been used to curtail both our freedom and our independence of thought. But is that concept, so blithely used by our leaders, truly what is meant by democracy? Or has it become just a word where many party-politicians are concerned, not a principle by which to live.

The concept of ‘democracy’ has been used to curtail both our freedom and our independence of thought.

The ‘democratic right to vote’ is worthless if it doesn’t produce democracy, nor does having a vote necessarily mean you live in a democratic society. Where did this all start? The beginning came out of Athens, an independent city-state.
Athens – the home of Socrates, Plato and other philosophers. It is worth remembering that while some of the best philosophical advances came out of their discussions in the Agora, Athens was fighting a 20-year war with Sparta, something pretty well absent in Plato’s later Socratic writing. These days fighting wars is accompanied by discussions based on propaganda, and there is no love of wisdom in that.

The Athenians labelled the different types of government thus: there was monarchy, the rule by one person and/or royal family; tyranny, the illegal or usurped monarchy; oligarchy, rule by those few with power; and demagoguey, rule of the people, by the people, for the people – what we now think of as democracy.

Democracy comes from ‘demos’ or ‘deme’, the Greek word for ‘village’. The deme was the smallest administrative unit of the Athenian city-state. And there, essentially, is the key to true democracy. It belongs to the little people and their communities, not Washington or Westminster. And because there are now such large populations everywhere, the administrative area has become too big to be governed by anything other than draconian methods. The connection ‘of, by and for the people’ has been broken.

Athenians didn’t vote; they chose by lot. That did mean that sometimes they got a lousy lot of men governing, but that was balanced by occasionally getting a really good council – of men. Of course, of men.

Only citizens’ names went into the pot; landless men, slaves and women didn’t come into it. Not that much of a democracy, but a beginning. Should we choose by lot? Perhaps not. But on a purely local level there is an argument to be made for selecting our representatives rather than electing people who put themselves forward or are chosen by political parties.

The Zapatistas, from the Chiapas area of Mexico, are known for reaching decisions by consensus, community by community, as well as selecting their representatives. The benefit is that those selected are there to represent the majority view of their community, rather than a party’s agenda. For one of the things that British voters are saying is that MPs do not represent their views, and too often the party agenda has little to do with, or is even damaging to the area the MP represents.

The connection ‘of, by and for the people’ has been broken.

Almost all governments counted as democracies are really oligarchies, government by the few; the few usually being a political class backed by money and corporate power. Real democracies aren’t rich in money; they are rich in people and values.

Many ‘democracies’ end up being dominated by two main parties, right and left, Tory and Labour, Republican and Democrat and so on. To an outsider, there is little difference to be seen between America’s Republicans and Democrats. In Britain, the Tories, Labour and the LibDems (fast melting away into a miserable little puddle of their own making) are all claiming ‘the centre ground’. No one seems to have realised that the centre ground itself has moved to the right.

Not for nothing has the Scottish Labour Party earned the name ‘Red Tories’. It is now hard to find a genuinely left mainstream party. The Scottish National Party, the Green Party and the Welsh Plaid Cymru are getting there but all can be hampered by party-political thinking.

A party-political system is very divisive. For a start, it demands that people take sides. It is an adversarial system that pits interests against each other instead of finding common ground. It becomes almost impossible for independent candidates, no matter how worthy, to be elected. Parties demand loyalty over and above an MP’s conscience. It is difficult to do anything but toe the party line, and that line can be very dogmatic and narrow in vision.

Westminster’s party whips rule when instead they should be got rid of. The Parliamentary Select Committees have come out with some eye-popping reports since party whips were shown the door.

Parties also have ‘party values’ which are of course ‘better’ than those of other parties. David Cameron is strong on values. More than once he has claimed that “Britain is a Christian country” and that we should all follow Christian values. How can he urge that considering some of the cruel policies his government has put in place? And anyway, what specifically are the ‘Christian values’ he says we should live by?

A party-political system is very divisive. For a start, it demands that people take sides.

In bringing them into the conversation, isn’t there an assumption they are different, not to say superior, to those held by Muslims, Jews, Buddhists, Hindus or aboriginal peoples? If it isn’t Christian values, it’s ‘British values’. Children should be taught them in school, though the textbook has still to be written, no one quite knowing what they are.

Politicians talk vaguely about ‘fairness’ and ‘justice’ yet can give no justification for these values being particularly British. I suspect that the ‘British’ values at the back of Cameron’s mind were born out of and promoted by the British Empire. One only has to read late Victorian and Edwardian boys’ fiction to see the process: never surrendering to the ‘enemy’, remaining at one’s post while facing screaming hordes of ‘natives’, the stiff upper lip and so on.

British values were built out of remaining in control of oneself while controlling ‘the natives’ in the Empire and Colonies. It’s what being British was all about. Rule Britannia!

And what with English Votes for English Laws, another distracting result of the Scottish referendum, how long will it be before Cameron and his cabinet ask us to uphold ‘English values’, happily ignoring the Welsh and the Northern Irish, let alone the independently-minded Scots? Values as promoted by political leaders are the values of the ruling class – because political leaders see themselves as the ruling class. And that is the problem that we voters have to solve.

We could all hold and live by good and moral values. But those values are universal. They do not belong to this religion or that, this nationality or that. They do not even belong exclusively to the human race.

British values were built out of remaining in control of oneself while controlling ‘the natives’ in the Empire and Colonies.

A lifetime dealing with animals has shown me how generous, caring, altruistic and ethical animals can be. There are times when I think that we humans are only superior in one way – our ability to delude ourselves.

So how is this for delusion?

“Scotland had a huge turnout in the referendum… The reason was that people were motivated, excited and engaged with the issues. Introducing more electoral innovation might make voters’ lives easier, but it is not a substitute for us politicians doing our work to connect properly with people, to engage with them and, after all, to get them to turn out to vote for us.”

And the Electoral Commission told the Political and Constitutional Reform Committee: “As we have seen in Scotland with the historic turnout at the referendum on independence, individuals will register and turn out to vote when they are inspired by the debate and are convinced of the importance of the issues at stake. Politicians and political parties must be at the forefront of this engagement.”

Isn’t it time that we the people were at the forefront? If we really want democracy, surely that is where we must stand.