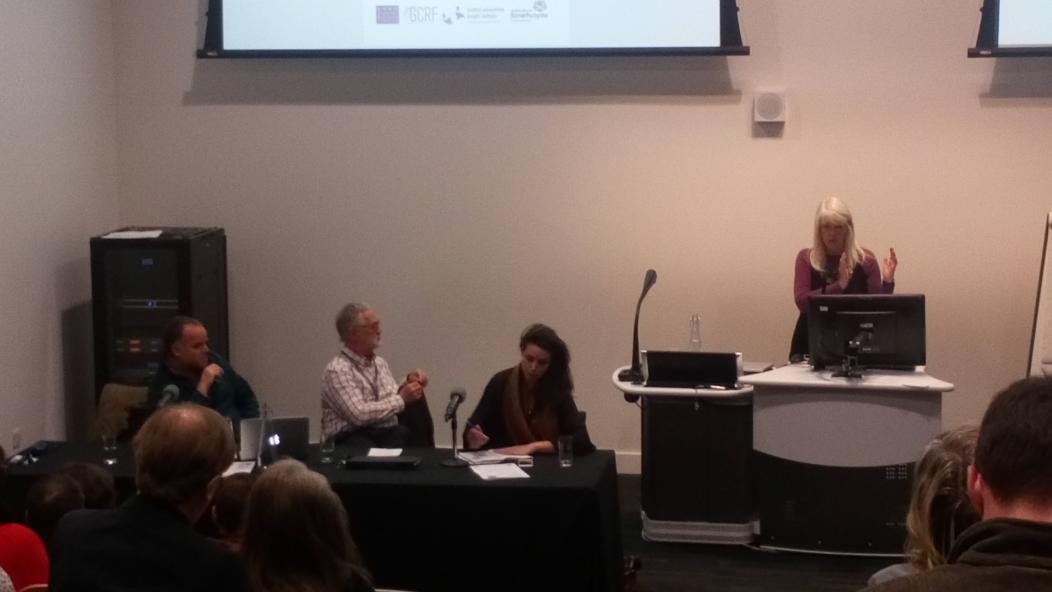 JOURNALIST and land reform campaigner Lesley Riddoch has told a meeting of academics, activists and land reform veterans that a party running on the issue of local democracy may be necessary to stimulate land reform in Scotland.

Riddoch, who was addressing a Stratchlyde University conference on a social justice approach to land reform titled ‘A Social Justice Approach to Community Land, Energy and Forestry’, argued that tackling the problem of Scotland’s weak local democracy was pivotal.

Adressing the event’s closing session on solutions to the land reform impasse – where a consensus exists for land reform but the concentration of land ownership continues to grow in practise – Riddoch argued that community buyouts, while welcome and inspiring, were not going to be the way Scotland’s enormously uneven land ownership model would fundamentally be tackled.

She said: “Working and mirco-managing a broken system is probably not the best use of your time.

“I’ve seen the incredible burnout that’s taking place in communities, where they are trying to do the work that  councils should be doing.”

In addition to a heavily concentrated land ownership system, Scotland has some of the largest local authorities anywhere in Europe, with just 32 local authorities in the whole country with badly depleted budgets and resources.

Riddoch said she was “not that hopeful” that the Scottish Parliament as constituted would be prepared to improve local democracy.

She said: “This idea of local democracy needs to go right up the political food chain and at this point I just don’t see how that can be done without a political party being set up with just that aim.”

Opinion: The Loch Lomond land sell-off and the problem of public land use in Scotland

The conference comes against the backdrop of decades of fights for community control over land and other resources such as energy. The event, organised by the University’s Centre for Environmental Law and Governance, was dedicated to the memory of John Booth, the designer of the Isle of Eigg’s off-grid energy system, founded in 2008.

The conference also heard from Angela Williams of the Knoydart Foundation, which was established in 1997 to take ownership of the Knoydart estate, which isn’t even attached to the national road grid.

Though speakers praised efforts at community control and innovation, they also argued national land reform could not realistically take this form.

Riddoch said it was not a serious prospect to reclaim Scotland “buyout after buyout hectare after hectare”.

Read more: Monopoly power vs Scottish food – How big money is undermining our most fundamental need

She added that in the Nordic countries, land social justice is built on “structures that do not change with the whims of the governments”, particularly at local democracy level.

“I don’t hear any appetites within the SNP to change it, more shame on them,” she added.

Green MSP and the author of ‘Who Owns Scotland?’, Andy Wightman agreed that a lack of local democracy remained a major problem in engaging land reform.

He said that changes should come about by “local economic and industrial strategies based on local power and taxation”.

“Visit any normal European country and what you’ll find is that much of what we are talking about is being done by local democracy,” he said.

“We cannot expect communities to pick up the pieces of centuries of mismanagement,” Wightman added.

Wightman also said that a new impetus around tackling the environmental crisis and the idea of a Green New Deal should create opportunities to re-evaluate the problems posed by these movements by concentrated land ownership.

Wightman said that “the scale of reforestation and other measures needed to stop land erosion is absolutely massive” and that “millions” is currently spent on trying to mitigate landslides in parts of rural Scotland.

“In any other European country there would be laws and regulations to protect grazing lands to prevent them becoming prone to landslides.

Tiffany Kane of the CommonWeal think tank told the event: “The scandal of an outdated ownership model is not only morally wrong, there are countless examples from around the world that it is not economically effective.”

Land reform advocates are debating the next steps for their movement after the passage of the Land Reform Act was passed at Holyrood in 2016, but many of its effects have yet to be implemented, and campaigners have demanded much more radical efforts to redistribute land ownership.