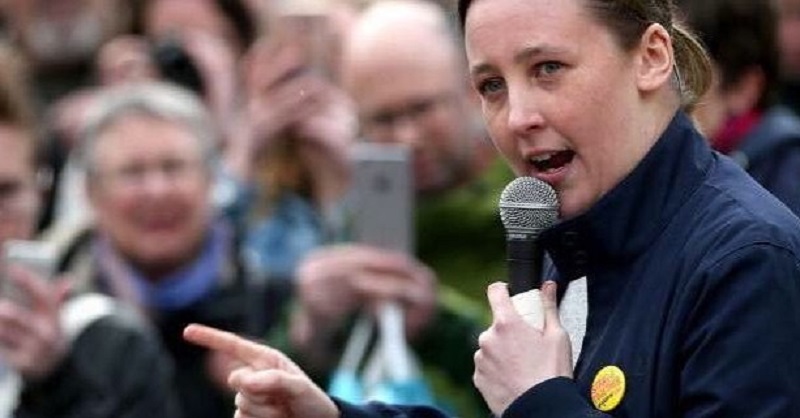 During a Westminster debate on Wednesday, SNP MP Mhairi Black quoted the “sexualised and misogynistic” abuse she has received

A GRAPHIC SPEECH by the SNP MP Mhairi Black in a Westminster debate on misogyny has highlighted the horrendous abuse women in public life are subjected to, which MPs say has become so normalised that the words do not make them feel uncomfortable.

Refusing to dilute her language and the reality of the issue, Black read out numerous examples of comments sent to her online which she said are typical of the reality she faced.

Black was speaking in a Westminster Hall debate on whether misogyny should be classed as a hate crime in the same way racist or homophobic crimes are currently.

Please be aware there is strong language throughout this video. My speech today in Misogyny as a Hate Crime debate. pic.twitter.com/PmyWmPhr4O

Speaking about the #TimesUp movement, set up in the wake of the #MeToo campaign to tackle violence against women, Black said it had forced her to the reality that women in her life had been the victim of rape.

“I am regularly called a wee boy, and told that I wear my dad’s suits and stuff. Me and my pals actually laugh about it. That is how I cope with it. We find the best insults, and that is how we have a laugh, but I struggle to see any joke in systematically being called a dyke, a rug muncher, a slut, a whore and a scruffy bint,” The MP, who represents Paisley and Renfrewshire South, said.

She added: “I could soften some of this by talking about “the C-word”, but the reality is that there is no softening when I am targeted by these words: I am left reading them on my screen day in, day out. Someone said:

“She needs a kick in the cunt’.

“I have been assured multiple times that I do not have to worry because I am so ugly that no one would want to rape me.” Mhairi Black MP

“I have been called ‘guttural cunt’, ‘ugly cunt’ and ‘wee animal cunt’. There is no softening just how sexualised and misogynistic the abuse is. Some guy called William Hannah – I have never heard of him in my life – commented:’I’ve pumped some ugly burds in my time but I jist wouldn’t’.

“I have been assured multiple times that I do not have to worry because I am so ugly that no one would want to rape me.”

Referring to Donald Trump’s now infamous comments, she said: “I regularly see guys on Facebook talking about “getting pussy” and using other horrible words for women, but should we really expect any better given that the man sitting in the Oval Office thinks that it is okay to grab a woman by the pussy and faces no consequences?”

However, Black said that Westminster itself must reflect on its own culture, saying that she was physically pressed up against another MP who has been accused of sexual misconduct in the voting lobby where there is so little room.

“Should we really expect any better given that the man sitting in the Oval Office thinks that it is okay to grab a woman by the pussy and faces no consequences?” Mhairi Black MP

She also raised the behaviour of two other MPs, Ian Murray and Paul Sweeney, who have been critical of Black’s voting record and attendance at parliament. She argued her attendance had been affected by ill-health, a fact she says both Sweeney and Murray are aware of.

The Labour MP Carolyn Harris, speaking after Black, said the graphic language her colleague used was not uncomfortable to her because she too had become normalised to such words directed at her.