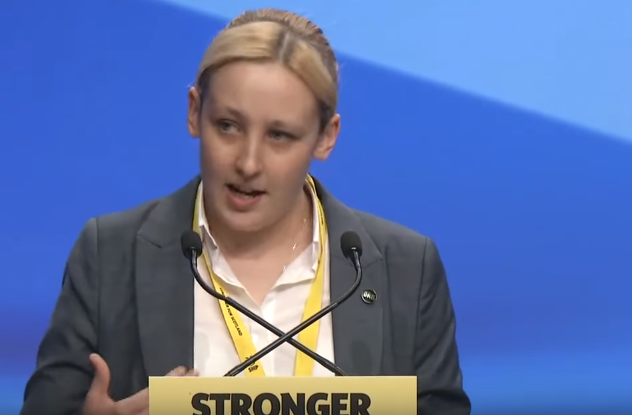 Independence must not be put on the backburner, Mhairi Black tells SNP conference

ADDRESSING THE SNP conference in Glasgow on Tuesday (10 October), Mhairi Black MP called for a fresh focus on making the case for Scottish independence.

In a conference where discussion of the constitutional question has been somewhat circumspect, Mhairi Black tackled the issue head on, urging the party to be “always unapologetically radical”.

Black said: “Some people say we should put independence on the backburner. Why would we ever?

“We should never be scared to talk about anything in society.

“Why should we ever fear debate and democracy in action in our country?

“The idea that, because we had one vote on the matter, we can never exercise our democratic rights on the matter again is utterly ridiculous.”

“We have to give people that vision of a better future before we can ask them to vote for it.” Mhairi Black MP

Black said that in order to make the case for independence, in order to win over undecided voters, the SNP must be “bold” and “confident” in its arguments.

“We have to keep believing in ourselves,” she said. “We have to give people that vision of a better future before we can ask them to vote for it.”

“Some people have said that the thought of independence is scary, that the idea of stepping into the unknown is a daunting idea.

“That’s understandable. It’s our job to change that.

Black took aim at Jeremy Corbyn for perpetuating myths about what independence would mean for Scotland.

She went on: “I’m sick to the back teeth of British nationalists perpetuating the myth that Scotland could not afford to thrive in the world as an independent nation.

“Let’s be clear: Scotland is a hugely wealthy country with unbelievable potential. Google it if you don’t believe me.

“The reality is that the UK is an economically selfish, increasingly xenophobic, cruel and reckless Britain.” Mhairi Black MP

“The real question is: can Scotland afford not to be independent?”

Recalling the “broken promises” and “pack of lies” which voters were fed during the 2014 independence referendum, Black said: “HMRC jobs would only be safe in the UK – that was a lie.

“Pensions would only be safe if we voted No – that was a lie.

“We would be treated as an equal partner – yet we’ve been ignored at every possible turn, in the most arrogant of ways.

“The reality is that the UK is an economically selfish, increasingly xenophobic, cruel and reckless Britain. It is a sinking ship.”

Black said the independence movement had been purposefully mischaracterised to “minimise the appeal of a diverse, brilliant movement”.

“Independence has never been about flags, or borders, or nationalism, or thinking we’re better than anyone else.

“You could even say that we’re up against a Goliath of sorts – but I know who won in the book I read.” Mhairi Black MP

“Independence is about vision and hope. It’s about being free to build the kind of society that we want without hindrance.”

Black acknowledged that bringing about this vision would not be easy, but provided a message of optimism: “Let’s get our chins up, and remember that, yes, we are up against it. We are up against the establishment that was once the most powerful in the world.

“You could even say that we’re up against a Goliath of sorts – but I know who won in the book I read.

Black also warned the party against the complacency exemplified, she said, by the “Scottish branch of the Labour party”.

“They are what we must never become,” she said. “Let us reject the career politicians. Let us reject cheap slogans.

“Let us ensure that we are always unapologetically radical and determined and that we’ll lead the way.”