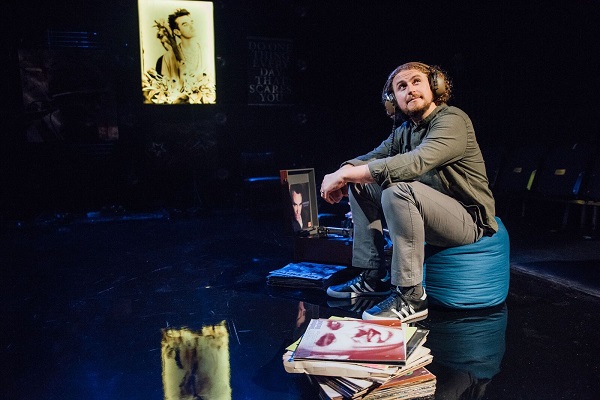 GARY MCNAIR’S fictionalised monologue of a teenager writing to his musical hero is touching and hilarious.

The hour-long performance follows a doe-eyed fan as he looks to The Smiths frontman for life advice.

Following a similar set up to McNair’s previous, critically acclaimed work (Gary Robertson is Not a Standup Comedian and A Gambler’s Guide to Dying), this one-man show follows a teenager experiencing loneliness – “the kind especially bottled for us indie kids” – who is told by his school counsellor to find someone to confide in about the things which cause him anxiety. He chooses Morrissey.

For a play exploring the line between hero worship and the realities of celebrities, Morrissey is a perfect subject matter.

McNair shifts between the quiet, unassuming young teenager and his indiscreet, straight-talking, Northern Irish counsellor with sharp comic timing. The hour-long performance, directed by Gareth Nicholls, explores the power of music, and its lyrics, to inspire and provide hope while also toying with what happens when you realise your idol won’t be writing back.

As troubles at home escalate for the boy’s best friend, Tony, he uses Morrissey as a confidant for his deepest worries.

The set, scattered with The Smiths records and Oscar Wilde novels, is fairly bare. Each scene is distinguished by the light of pictures hung upon the back curtain, an inventive feature from lighting designer Simon Wilkinson.

One lights up with the iconic neon of Glasgow’s Barrowland Ballroom as McNair’s character finally gets a chance to see his idol in the flesh. Another picture shows The Erskine Bridge seen from the top of the Old Kilpatrick hills.

While the play is set in an unnamed provincial town on the outskirts of Glasgow, the photograph will give the location away to anyone familiar with the Clydebank–Dumbarton area.

A third poster is brandished with the words “do one thing each day that scares you”, symbolising the patronising setting of the High School counselling office – “but I’m terrified every day,” states McNair’s humble character.

The Smiths lyrics are subtly interwoven to the delight of any fan in the audience but Morrissey is really just the apparatus for a wider coming-of-age story.

For a play exploring the line between hero worship and the realities of celebrities, Morrissey is a perfect subject matter. McNair acknowledges the controversies with the modern, narcissistic Morrissey and the, often terrible, things he can say but this is no attempt to rehabilitate a former artistic icon.

The play is relatable to anyone who has ever fallen in love with his lyrics. When, after the Barrowlands gig, McNair is directed by security to place his letter in the box of overflowing fan mail, he realises Morrissey, the person, is different from Morrissey, the idea, which clearly means many different things to many different people.

The Smiths lyrics are subtly interwoven to the delight of any fan in the audience but Morrissey is really just the apparatus for a wider coming-of-age story.

Letters to Morrissey is the classic tale of an awkward outsider looking for someone who understands them.