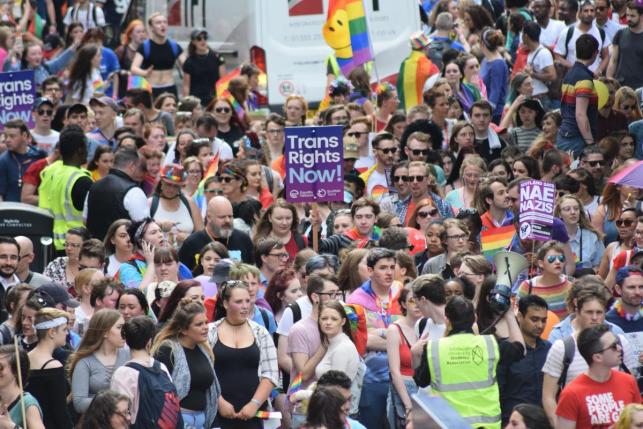 SCOTLAND’S EIS teacher’s union and a leading LGBT+ education campaign have called on leading Scottish Conservative MSPs to distance themselves from a website that published an article calling for action against “perverts” and “abusive nihilists” who teach children about gender diversity in schools.

ThinkScotland, which previously described itself as a think-tank and relaunched in 2012 as ‘an independent not-for-profit debating forum’, boasts Scottish Tory Finance spokesperson Murdo Fraser as regular writer and also lists Tory education spokesperson Liz Smith as a contributor.

The article, published on Tuesday [7 August] by Jonathan Stanley, regular commentator on the website, centres on a tirade against primary school teachers who it refers to as “abusive nihilists” who have “a sexual interest in children”. The piece comes in response to new guidelines by the Scottish Government for teachers on gender diversity.

“I see you have a sexual interest in children, have you considered a career in primary education?” Stanley, a researcher with the Bow Group – a rightwing think tank boasting senior Conservative Party backers – writes in the piece.

He goes on: “I believe the people who infatuate the sexualisation of children are perverts. Those who seek in the first instance, when they are learning boundaries and norms of their society, to actively blur and confuse them whether for Marxism or liberal causes, are abusive nihilists.”

The article later continues: “I want these nihilistic perverts fired…They are wicked and those politicians who idily(sic) shrug their shoulders while this happens are no better…”

The article concludes with a call to “brutalise” those who institute the new guidelines.

“The political right needs to have at least electoral offering that is prepared, like Trump, to brutalise such radicals and make professional life uncomfortable for them…”

Speaking to CommonSpace, EIS General Secretary Larry Flanagan said: “The ThinkScotland article is both misinformed and gratuitously offensive in a manner which is disturbing but regrettably no longer uncommon.

“The EIS believes that it is dangerous to deploy such rhetoric. Politicians should be wary of appearing to endorse such comments, by association.

“Teachers have an absolute right not to be subject to abusive, threatening or violent behaviour as part of their working lives.

“The EIS believes that equality matters should be addressed at all stages of the curriculum, in age appropriate ways. Children need to be supported in understanding issues of diversity, difference and stereotyping, including in relation to gender.”

Liam Stevenson, co-founder of the Time for Inclusive Education campaign, which is backed by numerous Scottish Conservative politicians, including Scottish Secretary David Mundell, told CommonSpace: “This article is not only inflammatory but ridiculously inaccurate, and the views expressed here are bigoted and ignorant. The author repeats dangerous insinuations used for decades to smear, intimidate and humiliate LGBT+ people. The calls for advocates to be “brutalised” could incite hatred and should be condemned.

“It’s unfortunate that Think Scotland seems to carry some influence due to their association with leading Scottish Conservatives –  the website can list MSPs Murdo Fraser and Liz Smith as contributors, and this gives warped ideas like these undue weight.

“They should consider their association with Think Scotland or any other outlet that gives credence to these views.”

Asked if he really thought teachers engaging in the scheme would be committing child abuse, he said: “…those who seek to intervene in the sexual development of children they do not raise are abusive whether their(sic) or not that is their intention.”

Pressed on what he meant by “brutalise” by CommonSpace, Stanley said: “Radicals who impose their policies based on abstract ideology on a society without expressed consent and merit should be made to feel uncomfortable. Their trade is purely based on the tit of the taxpayer.

“Cutting funding to such endeavours will be brutal enough and long overdue.”

The new guidelines, reported in the Scotsman and jointly created by the Scottish Government, Education Scotland and NHS boards, will be provided in an online package titled Relationships, Sexual Health and Parenthood.

To be introduced in 2019, part of the draft version reads: “Your sex is what you are told by a doctor when you are born. Most people are told they are a male child (a boy) or a female child (a girl).”

“People might think they know your gender because of the clothes you wear or the things you like to do. You are a unique person, you know who you are.”

“Your gender is what you decide.”

The guidelines come amid a national debate about LGBT+ education, pioneered by the Tie Campaign, which calls for teaching to address the existence of the full spectrum of sexual and gender identities at a school level, in response to endemic levels of bullying, mental distress, self harm and isolation experienced by LGBT young people.

The editor of the Think Scotland website, former Scotsman columnist Brian Monteith did not respond to questions from CommonSpace about the decision to publish the article.