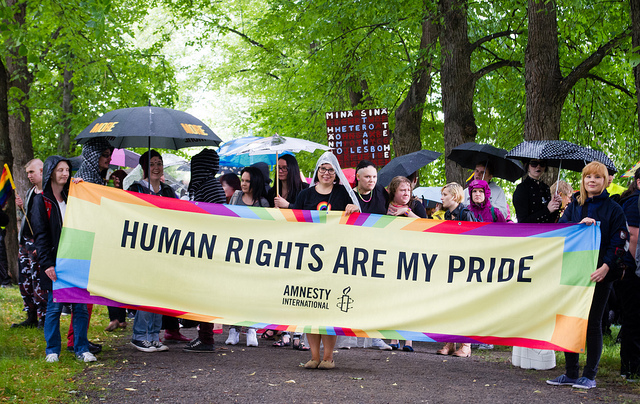 AN EVENT created to raise awareness of the struggles of LGBTI communities throughout the world will be held in Glasgow.

The Equality Network (EN) will host “An International Scotland?” on Thursday 7 September at the Centre for Contemporary Arts (CCA) in Sauchiehall Street from 6.30 – 8.30pm.

The informal discussion will focus on the struggles of LGBTI communities in countries where same sex activity is still illegal.

“We want to have a discussion with the LGBTI community of Scotland to see what Scotland could be doing around the world.” Equality Network

EN will debate the possibilities alongside guest speakers from the Kaleidoscope Trust and Amnesty International to focus on what could be done to highlight issues and help LGBT people around the world.

Event organiser Scott Cuthbertson of EN said: “Its basically a starter for 10. We want to have a discussion with the LGBTI community of Scotland to see what Scotland could be doing around the world for the LGBTI equality.

“As an organisation, we ask people every couple of years what could be done and the international issues has been going up that list more and more. So we want to have a conversation about how we can play our part in the international movement.

“For example, Scotland’s special relationship with Malawi through the Scottish international development fund, and see if there’s any way we can influence that.

“And remembering we were a colonial power in most of these countries for a long time, so its about how we can support them.”

The Scottish Government’s £9m international development fund was set up to focus on four countries: Pakistan, Rwanda, Zambia and Malawi.

In 2010, a 14-year prison sentence handed out to Malawian gay couple Tiwonge Chimbalanga and Steven Monjeza, was praised by the former president of Nigeria, Olusegun Obasanjo.

However, in 2012 Malawi imposed a moratorium on anti-homosexual laws, which effectively stopped people from being arrested for same sex activity. But in 2015, The Marriage, Divorce and Family Relations Law banned same-sex marriages in Malawi.

An International Scotland? will focus on recent incidents against the LGBTI communities in Russia, USA, Uganda and Nigeria.

Cuthbertson said: “I don’t think we will go too much into specifics. Firstly it will give us a bigger picture of whats going on in the world.

“Seventy-two countries still criminalise same sex activity, and in some of those countries it can mean going to prison, in others it can mean the death penalty. “ Equalty Network

“Seventy-two countries still criminalise same sex activity, and in some of those countries it can mean going to prison, in others it can mean the death penalty.

“People on the ground are having a real impact and are seeking international support.”

Scotland held the first ever LGBT international conference in 1974, and Cuthbertson said he wanted to maximise the role Scotland can play on equality rights.

An International Scotland? is a free, ticketed event. Tickets can be reserved here.