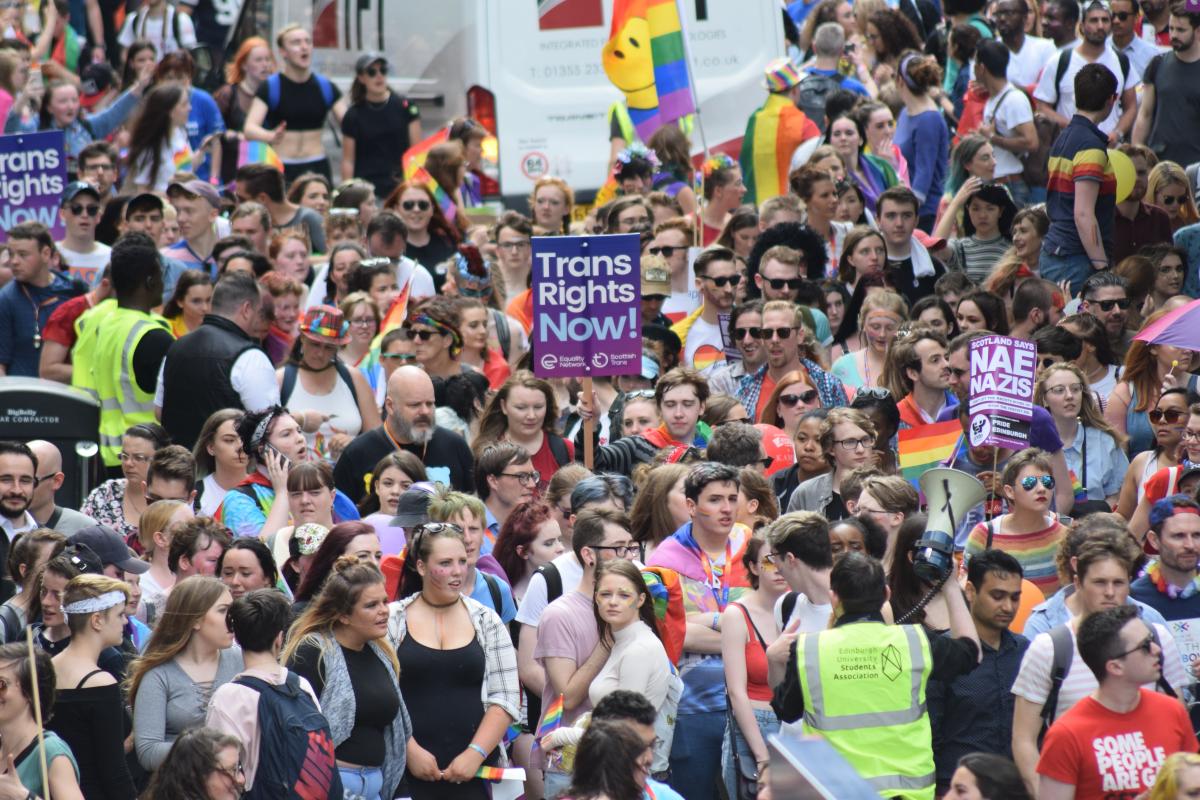 PRIDE festival will bring people together for a day of marching, music, and fairground fun.

The Pride parade has been an annual fixture in Glasgow since 2012, organised by the charity Pride Glasgow to celebrate and promote LGBTI equality.

The march sets off from 12pm at Glasgow Green this Saturday, and the organisers expect this to be their biggest parade yet, with over 90 organisations registered to take part in the march.

“We believe every family is beautiful and everyone should be given the opportunity to have a family life without discrimination or persecution.” Pride Glasgow organisers.

This year, the festival’s theme is #BraveEveryDay and is intended to celebrate LGBTI families. Pride Glasgow said: “We believe every family is beautiful and everyone should be given the opportunity to have a family life without discrimination or persecution.

“Pride Glasgow has partnered up with Scottish Adoption and GCRM (Glasgow Centre for Reproductive Medicine) to help promote key messages around adoption, fostering and fertility treatments. Help us support our LGBTI families and celebrate the bravery and love they share every day.”

The festival at Glasgow Green will include speeches from politicians, musical guests including The X Factor runner up Saara Aalto and B*witched, fairground rides, a Youth Area, Family Area and over 100 stalls. It has been announced today that Nicola Sturgeon will participate in the event, making her the first First Minister to do so.

Scotland’s LGBT charities and campaign groups will be represented at the event and are calling on supporters to join them at the march and consider the issues they are working to address throughout the year.

Speaking to CommonSpace, a TIE (Time for Inclusive Education) spokesperson said: “Pride is an important part of LGBTI culture and history. As well as being a celebration of progress, it is also fundamentally a protest, which offers an annual platform for the LGBTI community and allies to come together in order to challenge the societal inequalities and discrimination that many within the community still face.

“It’s been almost 30 years since Section 28 was introduced – the LGBTI community marched against it at the time and now we will be marching again for an end to its legacy.” TIE campaign.

“Over a quarter of our community’s young people have attempted to take their lives due to bullying and homophobic, biphobic and transphobic behaviours are still widespread in our schools.

“It’s been almost 30 years since Section 28 was introduced – the LGBTI community marched against it at the time and now we will be marching again for an end to its legacy.”

“You can also come along to one of our stalls at Glasgow Pride or Free Pride and sign a postcard urging your MSP to support our equal recognition campaign – which calls for the reform of the Gender Recognition Act. This would ensure that all transgender people have the right to be recognised as who they are in law.”

LGBT Youth Scotland Chief Executive Fergus McMillan also highlighted the continued importance of Pride for young people: “Pride events are often significant and memorable moments in the lives of LGBT young people, giving them an opportunity to feel a part of the wider community; a sense of belonging that can sometimes be missing in their early years after coming out.

“Pride events are often significant and memorable moments in the lives of LGBT young people, giving them an opportunity to feel a part of the wider community”, Fergus McMillan, LGBT Youth Scotland.

“It also gives them a chance to showcase the work they do in social action, meeting others who share their passion for social change.

“LGBT Youth Scotland’s current campaign, Mind Our Health, will feature on our placards, giving young people a public stage on which to share our messages about improving mental health services for LGBT young people and increasing awareness of the rights they have in healthcare provision.

“Our team of volunteers, youth workers and other staff will be marching with around 100 young people from across our groups and services.

“We will be working in partnership with Glasgow Life in the Pride Youth Space, to provide a fun and safe place where young people can have an authentic Pride experience, including face painting and even a mini sports day.”

The march is free to attend, and tickets for the festival can be booked online, at Polo Lounge or Delmonica’s, or on the day. Accompanied children under 13 years can attend for free, and while the Youth Zone for 13-17 year olds is sold out, there will be some tickets available on the day.