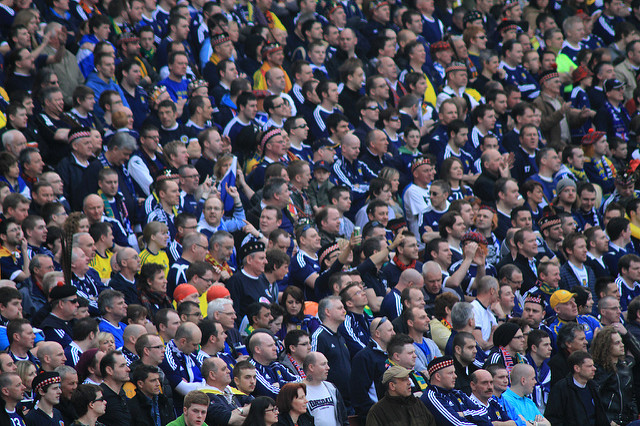 Liam Mclaughlan, member of the SSP national executive and football fan,  argues that despite the repealing of the Offensive Behaviour at Football Act, discrimination of young working class football supporters is still deeply embedded in football and policing culture

IN THE weird and wonderful world of Scottish football there’s not many things these days you can count on as being predictable or foreseen. The chaos and fallout from the post split fixture release however has become an annual certainty as it throws up the inherent anomalies and injustices over the number of home and away fixtures each of the 12 sides encounter.

This year has thrown up a scenario not seen in recent times in which Celtic could have sealed a 7th consecutive title by beating rivals Rangers in the first match of the post split games. Predictably, the governing body of Scottish league football the SPFL’s response to this scenario has now led to the fixture calendar being hastily rearranged after some heavy insistence and pressure from Police Scotland, so as to avoid such a situation from ever taking place.

However, the reason this has provoked me to write this article was not so much the act of changing the fixture itself, but the resulting debate between media commentators such as Michael Stewart and Daryl Broadfoot with ex police chief Les Gray on Monday nights BBC Sportsound programme.

The conversation on the program (which I recommend all with an interest in Scottish football listen too) shone a light once more on Gray’s frequently contradictory contributions as to exactly how football fans seem to be viewed and treated by the officers of law enforcement and Government in Scotland, with quite startling differences when comparing us to supporters of other national sports such as Rugby or Cricket.

It also served to highlight how despite acknowledging the significant progress already made in battling sectarianism both surrounding football and in wider Scottish society over the past two decades, those who are responsible for creating and then enforcing the law in Scotland seem still to be incapable of having a rational, sensible, evidence led discussion around these issues and the changing nature of policing required for such crimes in 2018.

Just as was the case in the implementation of the recently repealed Offensive Behaviour at Football Act, the overwhelmingly working class base that is the make up of football supporters in Scotland seems to be fair game when it comes to Police and Government using intentional hyperbole, scaremongering and sweeping generalisations relating to an unnatural propensity for violence, alcohol abuse and a thirst for mindless vandalism.

Contrary to popular opinion it would seem, I felt it worth while reminding readers that the overwhelming majority of us who attend football matches on a weekly basis in 2018 are in fact law abiding, tax paying citizens. Like the rest of you who have free will to choose to do what you want with your free time and hard earned cash, we choose to use it to follow our respective teams around the country and continent.

I read with interest Professor Tom Devine’s essay in this week’s Sunday Herald (8 February) in which he outlines his view that sectarianism is now practically dead in Scotland. Its against this backdrop that it seems to me a sad indictment on modern day Scotland and those who seek to shape it that the actions of a handful of idiots almost 20 years ago shackles the marketing and promotion capabilities of our national game, at a time when its widely regarded as finally being on a considerable upturn in fortunes. This all the while rendering a new generation of football loving Scots to be tied inextricably to the stereotypes of the past.

If modern Scotland is to truly resemble a nation reborn, it’s long before time we address the inherent class inequalities that lie at the heart of our society and our national institutions.