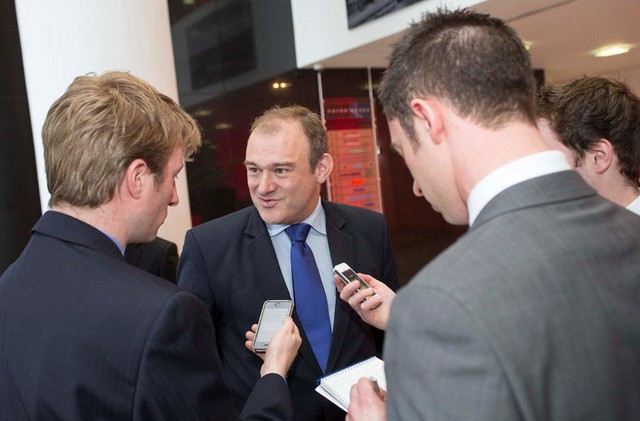 ED DAVEY is one of two candidates for the leadership of the Liberal Democrats, a party that has suddenly found a new lease of life through its unambiguous opposition to Brexit.

Davey, former Climate Change Secretary from 2012-2015 in the coalition government with the Tories, is competing against Jo Swinson, the party’s deputy leader, and CommonSpace caught up with him after his party’s leadership hustings in Edinburgh on Saturday to talk about his record in government.

The MP for Kingston and Surbiton was one of the contributors to the ‘Orange Bbook’ in 2004, which came to be the symbol of the wing of the party which was most identified with market solutions. As a minister he set up the ‘Green Growth group’, which brought together climate change ministers across Europe to promote a liberalised European energy market and a global carbon market. At home, in the 2013 UK Energy Act, Davey established a series of measures, including capacity market auctions introduced last year, to liberalise the UK’s electricity market. The ultra-free market Institute of Economic Affairs found that Davey was the minister in the coalition government who had been most succesful in advancing marketisation.

Given the limited progress in UK emissions reductions since that time, and the consensus among scientists of the need for much more urgent action within an ever shortening time frame, does he still advocate such a market-friendly approach to addressing climate change?

Davey says he sought to harness the market as our “servant” in tackling climate change as a minister.

“The solutions that I used were on the back of massive government intervention,” he contends.

”The auctions that I put in have worked because they have competitive market forces in under our state-led framework. That has seen the cost of green renewables fall tremendously.

“If the state did it by itself – I think Mr Corbyn would – we would still have costly green power. Because of the way I did it – marshalling in both state regulation and free market competition – we are now the world leader in offshore wind, bringing in jobs and tackling climate change.

“I reject the Conservative free for all, but I do think that we can harness the market to be our servant to tackle climate change.”

Davey was criticised by environmental campaigners in 2013 after he said “fracking is not the evil thing that some people try to make it out to be”, but he insists he was anxious about the environmental impacts of the hydraulic fracturing which has been used in parts of England to extract oil and gas from shale rock, but has not been introduced in Scotland due to a moratorium placed on it by the Scottish Government.

“I put forward very, very tough regulations, particularly on seismicity and on planning,” he says.

Cuadrilla, the oil and gas production company which got the go-ahead to start fracking near Blackpool, was forced to suspend test operations in 2011 after two earthquakes of 1.5 and 2.2 magnitudes hit the area. Later a study found that it was “highly probable” that the shale gas test drilling triggered the tremors.

Davey argues it was only because of the rules he implemented that many fracking projects across England have been suspended or stopped altogether.

“As a result of my rules – I was deeply worried about the environmental impacts – fracking has not been taking place around the country because the fracking industry has failed to live up to the environmental standards that I have insisted on.“

Davey was the minister who gave planning consent to the controversial Hinkley Point C nuclear reactors in Somerset. The project was finally approved for construction in 2016 under the Tories.

The megawatt’s per hour of Hinkley are now expected to be vastly more expensive than from renewables, while concerns over nuclear waste and safety remain. Davey says that the picture has changed since he took the decision to back Hinkley in 2013.

Davey says: “At the time we were looking, nuclear was cheaper than renewables.

“At the time, I was trying to kick start the offshore wind development, which was paying 140 pounds per megawatt/hour, which is quite expensive. I knew that it had to be done, and as a result of what I did, offshore wind prices have tumbled. Now offshore wind is cheaper than nuclear, but we did not know that at the time.

“Because we need to fight climate change, I think that it was right to invest in low carbon power, but in the future, we should not see nuclear because it is pretty clear offshore/onshore wind and solar power will be cheaper than nuclear will ever be.”

During the hustings meeting at Stockbridge Parish Church in Edinburgh, Davey proposed to have the “world’s green financial centre” based in London. He wants to regulate the banks, the debt markets, stock exchange and pension funds so that the billions of pounds that are invested in fossil fuels will be instead invested in green technology. He said that by doing so will make the investments less risky than investing in fossil fuels and people can get a good return on their pensions

The new Liberal Democrat leader will take over on 23 July.

CommonSpace also sought an interview with Jo Swinson MP but her staff informed us that she could not fit it into her schedule.

Picture courtesy of the Department of Energy & Climate Change