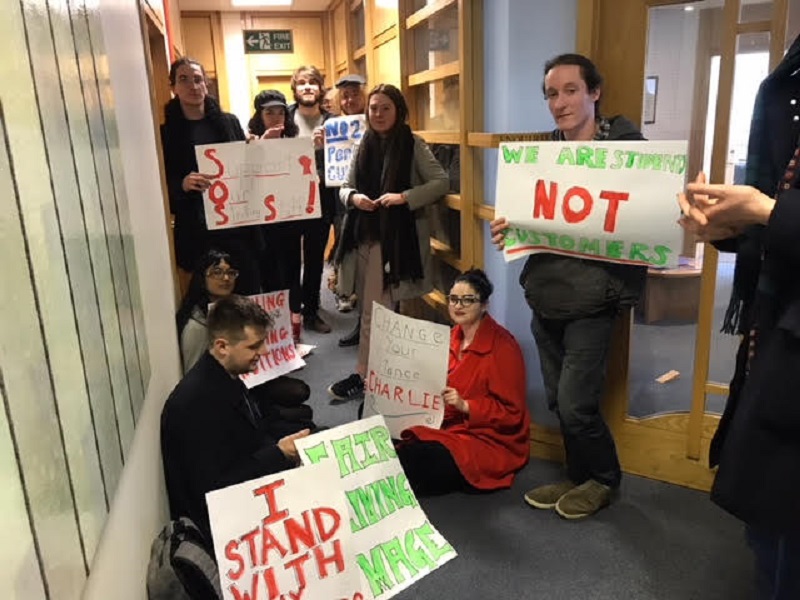 STUDENTS at Dundee University have occupied a management corridor overnight as part of nationwide student action in support of striking lecturers at universities across the UK who walked out of lessons at the beginning of February over proposed changes to their pensions.

Around 20 students made their way into a management corridor on Monday 12 March, issuing a list of demands including that the university becomes a living wage accredited employer.

CommonSpace spoke with a representative of the group, who said although there was some initial resistance to their protest from the university they have have been “generally accommodating”.

Tam Wilson, president of Abertay Students’ Association, told CommonSpace why he had joined the occupation: “Although I am at Abertay and not Dundee, I recognise that this strike is about much more than just pensions. These attacks on staff pensions are another symptom of the marketisation of education. We need to recognise education as a public good and that staff deserve fair pay and a fair pension, not a life of precarity.

Members of the Universities and Colleges Union at 61 institutions have been on strike over proposed changes to their pension scheme by the employers representative Universities UK, which they claim could leave them up to £10,00 a year worse off.

UUK said the changes were necessary due to a projected deficit in the pension pot of £6.1bn, but Union leaders disputed this figure claiming the method used to calculate the deficit was “recklessly prudent”.

Another student in the occupation, fourth-year history student Caitlin Meldrum, said the marketisation of her studies had affected her personally: “I am supporting the strikes and taking part in the occupation not only to support the lecturers but due to the marketisation of modules that has hit me personally in my third and fourth year of university.

“In the past, due to marketisation, lecturers have been left uncertain of their futures, something that should never happen, and have left or have been moved departments. This then leaves students uncertain of their futures and it’s a cycle of uncertainty that does not need to exist. One of the first lessons I was taught at university was to question everything, even if it was a minority. That is what I am doing here and why I intend to support the strikes and lecturers throughout.”

New talks on Monday 12 March appeared to show some signs that a deal had been reached by UCU and UUK, but CommonSpace sources have said it looks increasingly like that the proposals will be rejected by union members.

“One of the first lessons I was taught at university was to question everything, even if it was a minority.” Caitlin Meldrum, Dundee student

The students protesting at Dundee said university boss Peter Downes spoke to them for around 45 minutes, but added that they would not be accepting the “capitulation” agreement proposed on Monday evening.

A Dundee University spokesperson said: “The principal and other members of senior management met with a small group of students who are staging a protest in relation to the current national dispute over the Universities Superannuation Scheme (USS). The principal was happy to explain to the group the university’s own position in relation to USS, which is that we want to see a pension scheme that is sustainable, affordable for both employee and employer, meaningful in terms of providing a dignified retirement income, and understandable.

“The university’s stance is in line with that of UUK, the body representing universities in relation to the USS discussions.

“He also emphasised the University is taking every care to ensure there is as little detriment as possible to students as a result of the current industrial action.”

At the time of publication, the protest at Dundee University was still underway.