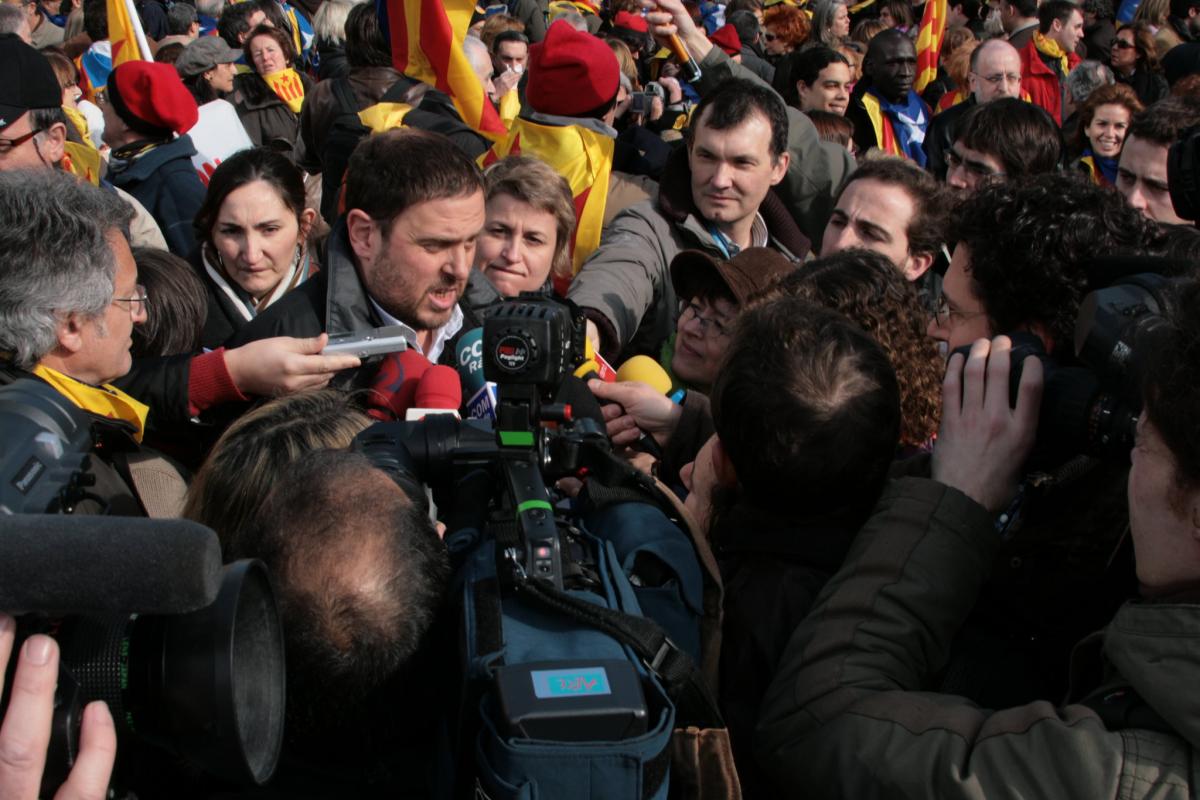 Catalan independence supporters say they will continue dialogue, despite imprisonments

SIX jailed leaders of the Catalan Government have made a dramatic return to their national parliament, to defend their decision to hold the 2017 referendum on Catalan independence.

Former Vice President Oriol Junqueras was joined by Raül Romeva, Dolors Bassa, Jordi Turull, Josep Rull and Joaquim Forn for their first appearance at the parliament buildings since the October 2017 referendum and their subsequent imprisonment, where he spoke at a commission hearing regarding the imposition of direct rule from Madrid during the crisis which followed.

The political prisoners were led to parliament by police, and greeted by cheers of “libertad” (or “freedom”) by groups of supporters, as well as by Catalan President Quim Torra.

Speaking at the hearing, Junqueras engaged in a passionate defence of the decision to hold the referendum, saying: “Nothing we have done is a crime, because holding a referendum is never a crime.

“We are convicted, we are in prison, but will continue to fight to build a better country and a society that is more just. And to do it with all the tools of our own state.”

The unionist Citizen’s party Catalan leader Lorena Roldán accused Junqueras of using the hearing to “only to preach to your supporters, to continue your movement”.

Junqueras maintained his commitment to “dialogue” even while he and his fellow political prisoners, including a further three leaders who were not present, remained in jail on charges relating to the organising of the referendum.

Junqueras and other pro-independence leaders have consistently attacked the imposition of direct rule and other measures of political repression, which they say have disrupted the normal functioning of Catalan democracy.

However, the display of unity and conviction comes at a time of strain for the Catalan movement’s parliamentary wings, with the two largest parties Junts per Catalunya and Esquerra failing to agree to protect Torra’s status as an MP earlier this week.

Nevertheless, Torra will meet with Spanish President Pedro Sánchez in Barcelona on 6 February to discuss the question of Catalan independence – the key condition under which the pro-independence Esquerra Republicana agreed to back the formation a coalition Spanish Government between the Socialists and the left-wing Podemos.

Spanish Government spokesperson María Jesús Montero commented the Spanish Government was “committed to advancing territorial dialogue”, which would be “key to solving a conflict that has been going on too long.”