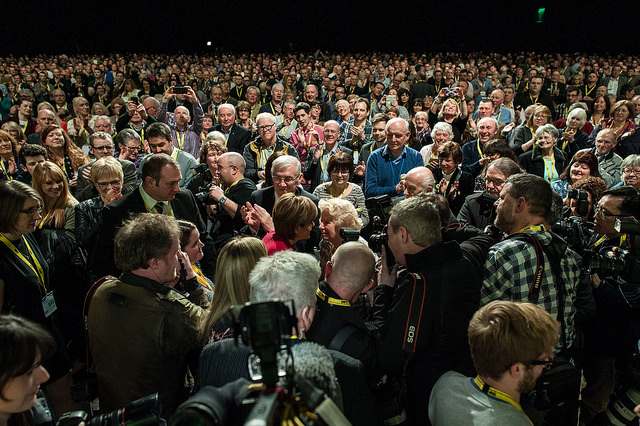 In today’s instalment (19 July), Wilson discusses the ups and downs faced by the SNP in the 1960s, and offers advice on how today’s SNP activists and leaders can maintain membership and momentum from 2014.

Gordon Wilson: It was a manifestation. There was quite considerable political unrest in France with student revolts and strikes. And you had Quebec going on and you had unrest over Vietnam in the United States. You might say it is rather like 2015-16 and Donald Trump and all the rest! It is a battle between those in control and those who are not, between the elites and the people. And it will be interesting to what extent that has an impact on the outcome of the European Referendum. Now I’m not a prophet. But you had that change, and then the next stage as you know well from history is that the SNP crashed but leaving behind the relic of Kilbrandon Commission like a time bomb ticking away very slowly, and the SNP recovered, and there was the discovery of oil – then we had the SNP in full flow.

WMcN: I’m just thinking about how you described this roller coaster ride for the Independence movement from the 50s through the 60s into the 1970’s – lots of peaks and troughs?

“You might say it is rather like 2015-16 and Donald Trump and all the rest! It is a battle between those in control and those who are not, between the elites and the people.” Gordon Wilson

GW: Yes – Peaks and troughs for the SNP, but you said the Independence movement, but there was no Independence movement by then. That had been in the 50s and early 60s but all the other bodies had gone by the 70s, and theSNP was by then advancing far faster than the cultural background.

WMcN: I recall reading in your book that membership of the SNP in this period was maybe up to 70, 80, 90 thousand – so certainly on paper there was a huge surge in membership in the late 1960s?

GW: It went up and Ian MacDonald claimed it was about 120,000 but I pinned him to the ground, and he said that the trouble was that it was difficult to judge but it would no less than 70,000.

WMcN: That’s a significant political party in the Scottish scene in that period of time.

GW: And it was well funded because we had Alba pools based on the membership bringing in income which in modern terms would be into seven figures.

“If the bottom falls out, it falls out very quickly and then you are left with a superstructure of staff which have to be made redundant and that’s happened twice in my lifetime and its not a pleasant thing.” Gordon Wilson

GW: I can’t answer that. Indeed, no doubt Peter Mallow and Nicola are scratching their heads and worrying. If the bottom falls out, it falls out very quickly and then you are left with a superstructure of staff which have to be made redundant and that’s happened twice in my lifetime and its not a pleasant thing. You can’t control it but you’ve got to remember that Scotland was going through transition and support for the SNP was skin deep, and there was no great generational loyalty, and it probably wasn’t until the 1990’s that it stabilised and you began to get a second generation coming through whose parents had voted SNP. And Scotland’s identity I think, as far as I could see, in the 1950s was British. In the 1960s it was British with a bit of Scotland put in, and that carried through into the 1970s. Roundabout the 1980s it began changing again and the loyalty became more Scottish but still British.

I mean I was reading an opinion poll quite recently that showed that not only had we got the 45 per cent in the YES vote being a nationalist total but you’ve got an increased British identity in Scotland because one has reinforced the other. Action and reaction or equal and opposite, aren’t they, maybe not entirely though – otherwise we’d give up!

WMcN: On the one-hand there are all these great opportunities that are created by these surges in membership, you are getting resources, you can build an organisation, you can build networks, there can be a real push forward when you get that surge. But there are also dangers when you get that surge as well. There is the danger of dissipation but there is also dangers of schism as well, and the SNP has a history of schism and that’s obviously something you want to avoid. How can the SNP today with lots of different expectations from the members, lots of different reasons why people have joined the SNP – how as party do you keep a lid on that?

“Success is the most effective cement you can have in sustaining party unity.” Gordon Wilson

GW: By being successful. Success is the most effective cement you can have in sustaining party unity. If you are doing well, if people have ambitions that can be realised, if there is a feeling well-being, then nobody is going to do anything except support the leadership. Indeed, in the current SNP, particularly amongst the older members – they dislike disloyalty, having been through that sort of thing before. But of course, all it needs is a downturn in electoral performance and people losing their seats, people not being elected, then you will have people who find reasons for disagreement on policy mixed in with personal bitterness. And when you get to that stage you are in danger, and of course if you get to the stage where people lose hope you are in danger of falling apart.