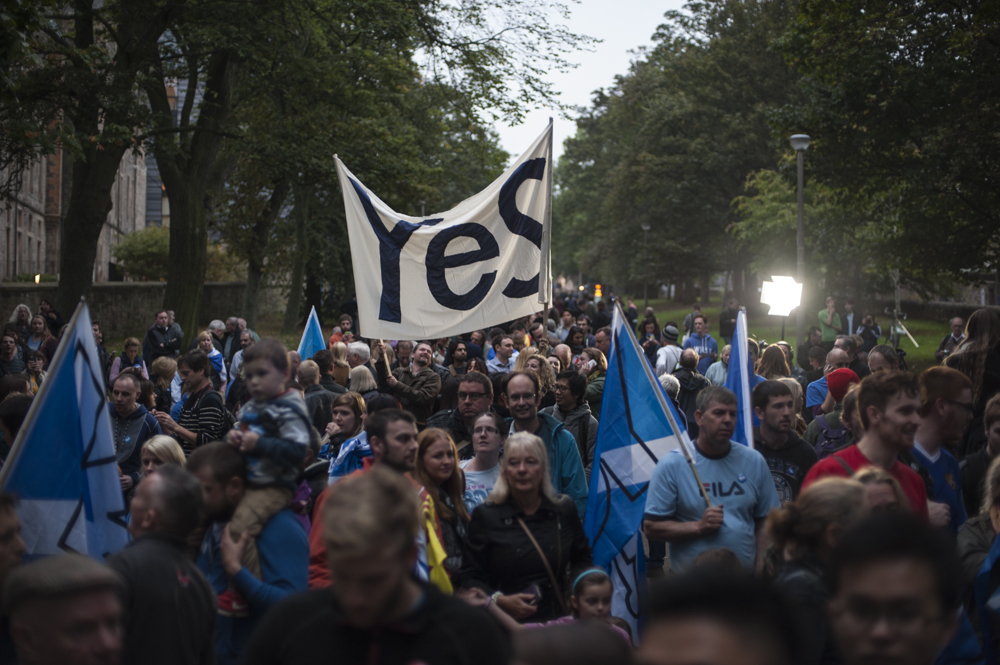 In today’s instalment (24 July) Wilson talks about the importance of the pro-independence left to a second independence referendum and the need to adress difficult economic questions.

The indy left, economics and indyref2

Dr Wallace McNeish: When it happened, do you think that the SNP really believed that they could win the Referendum?

Gordon Wilson: I can’t argue that. I was one of the few who did not at all play to the illusions that we could win. Indeed, I thought it was a wonderful result. But I never thought we would win because the gap was too great and I knew from experience the ferocity of the counter attack, the establishment, which are now seeing repeated for the European Referendum. They learned a lot of lessons in fact. But there were weak points. What’s the narrative behind signing up to a common fiscal policy, a financial policy run by the Bank of England and the Treasury? What’s the point, they don’t give a damn about Scotland anyway.

In fact, wasn’t there a governor of the Bank of England who said about 15 years ago, that the price of controlling inflation in the South was unemployment in the North, then that was an acceptable outcome. And from that point of view.

“What was the economic reason in the Independence referendum campaign for Scotland becoming independent?” Gordon Wilson

WMcN: What about the economic narrative?

GW: I mean if you take, in the economic narrative the political narrative in fact should be that ever since the big bang in London within the United Kingdom the balance of the UK has been disturbed because over the last 30 years it is London and the South that has grown at the expense of the North of England, Wales, outlying areas like Northern Ireland and Scotland, and we are actually in a much stronger position than say the North of England, which I have experience of, who are devastated and the power house options that are being mooted there are purely cosmetic. But if you then develop that, not just how it has affected Scotland, but where we should be 5, 10 15, 20 years into the future, that’s not the turbulence of the first two or three years which is inevitable.

WMcN: So, there wasn’t a strong enough narrative?

GW: There was no narrative. What was the economic reason in the Independence referendum campaign for Scotland becoming independent?

WMcN: Would you have argued for a more radical agenda?

“Alex [Salmond] is a long believer in triangulation in politics.”

GW: Alex [Salmond] is a long believer in triangulation in politics. That is, if you are going for something radical you need to be in agreement with everybody else on other matters and the pound, sharing the pound Sterling was part of the base level, independence being the key.

WMcN: Pensions arguments as well, big argument around pensions? You said that the older generation.

GW: But they never did anything. Of course, the trouble is that people are ageist. I mean the pensioners don’t really count, except we do count because we getmore money than anybody else out of the benefits system because we vote.

We went through our austerity before you, we did it during the war and post-war. In the campaign, there was no attempt to reassure the poor pensioners who would normally be on our side. And there had to be some way of trying to deal with the pensioners who are better off with private pensions – there was no attempt to deal with that. And of course, it was that age group, and indeed the one reason why we fell back at the end was the onslaught from Gordon Brown saying we would lose the benefit of the national insurance fund.

There is no national insurance fund. But that gave the impression that England would keep the fund and we wouldn’t get money for pensions.

“The SNP is a party of government, can it then be counter-cultural at the same time?”

GW: I think they are right. If you are shown to be competent in government you will harness a large amount of support – say 60 per cent in the most recent opinion poll for the constituencies for the upcoming Scottish Parliament elections, because you are better than everybody else and you are solid, cautious and you don’t make too many mistakes. Even the new Forth Road Bridge is coming in a billion underspend. I think they are very gradualist and they are a party that govern and the leadership is supported by the membership.

The one tricky point they’ve got is that the expansion of membership does not necessarily mean that the old tribal loyalties will be there. Also, there is now in existence beyond the membership, but including some of the members, a different school of thought, which is much more urgent towards independence. And how they manage to balance that I do not know except they will be able to do once they get past the indyref2 – post EU referendum. Then my worry is of course they will do nothing after that, and that’s where we do need to set up a campaigning unit based upon research, into the economy, how would we manage a separate pound and so on.

WMcN: If we are serious about independence there needs to be some kind of campaign unit set up now, serious research, to answer the kind of questions that sowed doubt in the minds of the Scottish people about the economy?

GW: It should start with research. Research, which the SNP was always very good at – an ability to simplify the issues into terms that people can understand. Address it to a narrative of why Scotland would be better off. In the background, of course, you then have the identity issue but you don’t necessarily have to be overt about that, that will develop naturally and your aim must be to get a swing of about 7.5-8 per cent from the No’s.

WMcN: Do you think it is necessary for the SNP to work in partnership with the other constituent parts of the Independence movement? Here I’m talking about some of the smaller parties, the Greens, the RIC people, and the variety of different small groups who campaign alongside the SNP? They maybe added 5-8% to the Yes vote.

“The SNP is par excellence a political organisation, but it’s not an independence campaigning one except by necessity.”

GW: Oh yes, I think that was the impact that emerged and was so dynamic during the independence referendum. It actually links back to the cultural aspect. But as for any research unit is concerned it would either be done by the SNP which will dictate it and the problem is – can it do it properly? Because it is a party of government, can it then be counter-cultural at the same time?

WMcN: That’s a real balancing act, it is very tricky.

GW: If it doesn’t do that, then there may have to be some independent body set up as a campaigning unit which will be crowd funded. But the other thing the party, and the whole movement’s got to watch is that they may well be very happy to suppress indyref2 at this stage but we don’t want to kill off the goose because the excitement has to be there, the impetuous has to be there.

The SNP is par excellence a political organisation, but it’s not an independence campaigning one except by necessity. You now have a wider group of people, whether they are manageable is another question – whether they are capable of coalescing and not falling out, it’s rather like the Left isn’t it, but also like the Nationalist Movement in the 1950s.

WMcN: I realise we are out of time – Thank you very much for the interview.