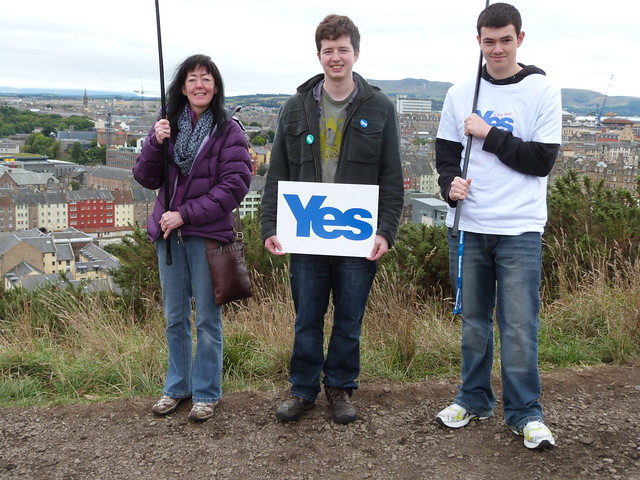 Linda Bates, development officer for a health charity in Edinburgh, explains the ideas behind Positively Yes for Scotland, a new indy Facebook group that aims to focus on the positive case for Yes

SO CROONED Bing Crosby (and a host of subsequent others) – and this song, which was written in 1944, exemplifies my own attitude towards making the case for independence for Scotland.

At this moment in time – mid-2019 – Scotland yet again finds herself a bystander in the theatre of ‘UK’ (and for that, read ‘English’) politics.  Without any meaningful power at Westminster (notwithstanding the determination of SNP MPs to make themselves heard) and feeling like a hostage to fortune, it’s very easy to compile a litany of woes about Scotland’s situation and circulate all the awful examples: about Brexit and ideas of Empire-lite ‘exceptionalism’, about how dysfunctional the UK Parliament is, or the latest examples of Tory Government austerity policies in dreadful action.

It’s against this relentlessly negative backdrop that I decided to create a Facebook group in late 2018, called Positively Yes for Scotland.  Instead of endlessly repeating the same depressing and/or enraging articles, which seems to be the only fare of most pro-indy pages these days, I believe that we need to give people hope – for the sake of our collective mental health, we have to have an alternative!  But this is no ‘Pollyanna’ type of determined cheeriness, despite dreadful circumstances: it’s rooted in the knowledge that positivity (and being reminded of what’s already great about Scotland) helps win people over.  You catch more flies with honey than with vinegar, as the saying goes.

The most successful social movements provide a reason to take action for something new, not just against the status quo.  If we want to win the next independence referendum, it obviously follows that we have to persuade more people than before of the benefits of self-governance, not just repeat that the alternative is awful – since the party in Government at Westminster can change.  This needs to be a permanent remedy, not a temporary plaster.

It really is that simple – but also that challenging, particularly in this day and age when many people want black-and-white answers in a technicolour world.

So ‘positive framing’ is the name of the game – which focuses on people (and countries) gaining something rather than losing anything: talking about ‘progress’ and ‘equality’, rather than ‘decline’ and ‘inequality’.

In the case of Positively Yes for Scotland, there are three parts to the narrative around campaigning for a ‘Yes’ vote at the next independence referendum:

This means no posts about how awful Westminster/Brexit etc. is (we know that already) – we make no reference to them, as starving them of the oxygen of publicity (even negative publicity) means they don’t take up any of our energy. It’s a bit like saying “don’t think of a dancing elephant” – just the mention of it makes us think of the elephant and means we’re drawn into their world, focusing on their story.

As Oscar Wilde said, “there’s only one thing worse than being talked about – and that’s not being talked about”.  A much better idea is the quote from Canadian poet, Dennis Leigh (and re-quoted by Alasdair Gray in 2014): “work as if you live in the early days of a better nation”.

So recent posts on Positively Yes for Scotland have included items on:

– Scotland generating the most tidal stream energy in the world;

READ MORE: Siobhan Tolland: Launching the Indy Pledge – a code of conduct for the Yes movement

– Scottish exports out-performing those from rUK;

– The Scottish Government’s work to assure EU citizens that they are welcome – and valued – in Scotland;

– The success of the big All Under One Banner marches around the country;

– Promoting other positive pro-independence initiatives, such as YES stones (“rocking the nation”!); the #YYES photo portraits project; Indyposterboy’s printable resources with great stats and quotes; the Skye-based #amillionreasons website for encouraging people to share their own reasons for independence; Indycar Gordon Ross’s vlogs; and the ‘Keep Scotland the Brand’ campaign for our vast array of produce.

It’s why we need to focus on the ultimate aim first – independence – and then decide what the Government will look like (single-party or coalition? single chamber or bicameral? head of state?).

So come and join us on the Positively Yes for Scotland Facebook page: as the old cooking adage goes, if you want to make a rabbit pie – first, catch your rabbit.  Everything else is just seasoning.