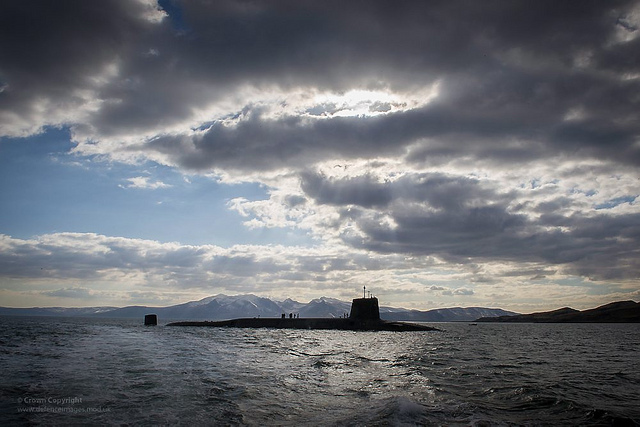 AFTER more than a decade of debate and controversy, Westminster MPs voted overwhelmingly to continue the UK’s submarine-launched nuclear weapons programme in July 2016.

All but one Conservative MP and a majority of Labour MPs agreed that the Trident programme is “essential” to the UK’s security and the government should replace the country’s four ageing vanguard class nuclear-armed submarines. Only 117 MPs voted against the government’s motion, including 58 out of 59 of Scotland’s MPs, compared to 472 in favour.

There are many reasons why so many UK politicians favoured Trident renewal. The perceived need to maintain the UK’s self-identity as a nuclear weapons state, with “a seat at the top table”, was a significant factor. Another was the bipartisan desire to maintain the country’s status as “number one” ally of the United States.

This requires the UK to adhere to US national security policy and to maintain a “significant power projection capability”.

Another important factor was the influence of arms companies involved in the UK’s nuclear weapons programme.

Military budgets fluctuate but nuclear weapons contracts provide arms companies with a steady, long-term source of revenue. BAE Systems’ shipyard at Barrow-in- Furness is the only site in the UK which is licensed to build nuclear submarines and Rolls Royce is the UK’s only manufacturer of the submarines’ nuclear power reactors. A decision to renew Trident therefore offered guaranteed revenue for both companies.

It is UK Government policy to maintain an indigenous nuclear submarine-building industry. The capability is deemed to be so crucial to Britain’s national security that the government “could simply not countenance sourcing [it] from overseas”, as the 2005 Defence Industrial Strategy put it.

BAE and Rolls Royce used this to their advantage, arguing that regular orders of submarines were needed to sustain the industry and maintain the UK’s “sovereign capability”.

BAE submitted to the House of Commons Defence Committee in October 2006 that if there was a gap in production following the completion of the astute class nuclear-powered submarines in the 2020s, “the loss of capability and expertise is likely to be irreversible”.

BAE’s managing director, Murray Easton, further warned the committee that such a gap would have a “catastrophic impact” on Barrow shipyard’s ability to design and build nuclear submarines, and therefore on the UK industry as a whole.

Similarly, Rolls Royce submitted that a gap in production would be “likely to have increasing impacts on Rolls Royce capabilities and dedicated manufacturing facilities”, and that “[t]he wider supply chain would also be significantly impacted”.

This position was endorsed by the defence committee in its report on the “manufacturing and skills base issues” related to Trident renewal, which stated that “[i]f the government wants the UK to continue to design and build nuclear-powered submarines, it will be essential to maintain a regular rhythm of submarine construction”.

These arguments no doubt resonated with Prime Minister Tony Blair, who was a staunch ally of BAE Systems during his time in office and has been accused of allowing the company to influence foreign policy. The chairman of BAE “appeared to have the key to the garden door to No 10”, as Blair’s foreign secretary Robin Cook later put it.

In December 2006, the Blair government announced its intention to press ahead with Trident renewal, despite opposition from a majority of the British public and evidence from experts that a decision on renewal was unnecessary.

The speed of the decision and lack of consultation angered many MPs and prompted the Campaign for Nuclear Disarmament (CND) to question whether the government’s
nuclear weapons policy was being decided “on the basis of the commercial requirements of BAE”.

As well as BAE and Rolls Royce, several other companies had a stake in Trident renewal.

The Atomic Weapons Establishment (AWE), which is responsible for manufacturing the UK’s nuclear weapons, is currently run by a consortium of Lockheed Martin, Jacobs Engineering and Serco. Lockheed also makes the Trident II (D5) nuclear missiles deployed on British and American submarines.

Babcock International maintains the British Navy’s nuclear submarines and manages Faslane naval base, where the vanguard class submarines are based. Babcock was also involved in the design of the successor submarine.

Babcock, AWE and Lockheed Martin UK form the ABL Alliance, which is contracted to provide support for the Trident weapons system at the Royal Navy Armaments Depot Coulport and the Strategic Weapon System Building (SWSB) at Faslane.

Research published by Campaign Against Arms Trade (CAAT) and information from other publicly available sources shows that, in the years preceding the 2016 Trident vote, these companies employed several individuals who had previously worked for government or the military in senior roles connected to the UK’s nuclear weapons programme.

The extent of the “revolving door” between the Ministry of Defence (MoD) and the private sector is well known and critics suggest that it is one reason why many MoD projects fail to deliver value for money.

Senior former military officers and government officials have an inside understanding of the MoD and established relationships with decision-makers, which can potentially be exploited by their new corporate employers. There is also a risk that government employees will try to curry favour with companies while in office, in the hope of securing lucrative future employment.

In the case of Trident, support for renewal from senior former government and military personnel arguably helped to define the parameters of the debate, and to secure an outcome which is detrimental to British taxpayers but beneficial to the companies which profit from nuclear-weapons related work.

Lockheed has employed Lord Hutton of Furness as a consultant since 2014. Hutton previously held several cabinet positions in the Blair and Brown governments, including secretary of state for defence between 2008 and 2009. He was a Labour MP representing Barrow and Furness, where Britain’s nuclear submarines are built, between 1992 and 2010.

Hutton has long been an outspoken supporter of Trident. In February 2016, he stated in an op-ed that the need for Trident was “self-evident”. In another article, he argued that the Labour party had to support renewal if it “wants to retain any credibility on defence whatsoever” and accused those who raised concerns about the viability of the project of behaving “like children jumping from sandcastle to sandcastle as the tide washes each fresh objection away”.

Hutton is just one of a number of members of the House of Lords who had a financial interest in the corporations involved with Trident, or the banks that finance them, as CommonSpace reported in 2016.

Lockheed has also employed former First Sea Lord, Admiral Sir Jonathan Band, as a non-executive director since 2010, according to his Linkedin profile. The First Sea Lord is the professional head of the Navy, with command over all naval personnel and vessels, including nuclear-armed submarines.

As well as being responsible for maintaining the “fighting effectiveness, efficiency and morale of the Naval Service”, a key part of the First Sea Lord’s role is advising the defence secretary on maritime strategy and policy. Band has also been employed by Babcock as an adviser.

Serco appointed Sir Keith O’Nions to the advisory board of its defence, science and technology division in 2008. Sir O’Nions was chief scientific advisor (CSA) to the Ministry of Defence between 2000 and 2004, a role which involves overseeing the UK’s military science and technology programmes, including the manufacture of nuclear weapons.

According to the Guardian, Sir O’Nions’ role involved “presiding over key agreements between the UK and the US on nuclear matters and ballistic missile defence technologies”.

As Faslane is regarded as the only suitable location for the UK’s nuclear armed submarines, the viability of Britain’s nuclear weapons programme would have been thrown into doubt by a Yes vote.

In 2015, Sir Band, Lord Hutton, Sir O’Nions and other senior former military and government figures signed a lengthy open letter to Prime Minister David Cameron arguing that it would be “irresponsible folly to abandon Britain’s own independent deterrent”, which was widely reported in the media.

For proponents of Trident renewal, Scotland’s 2014 independence referendum presented a serious threat. A majority of Scots opposed renewal and the country’s SNP government had promised that nuclear weapons would be removed from the country if Scotland voted for independence.

As Faslane naval base near Helensburgh is regarded as the only suitable location for the UK’s nuclear armed submarines, the viability of Britain’s nuclear weapons programme would have been thrown into doubt by a Yes vote.

In April 2014, Sir Band co-signed a letter to Scotland’s first minister, Alex Salmond, attacking the Scottish Government’s plans. The letter said that if Trident was removed from Scotland, a “dark shadow” would be cast over Scotland’s international relations and most of the naval jobs at Faslane and Coulport would be lost.

Other signatories included Admiral Sir Nigel Essenhigh and Admiral Sir Jock Slater, both former First Sea Lords. Sir Essenhigh was First Sea Lord between 2001 and 2002 and, according to CAAT, was a non-executive director of Babcock between 2003 and 2012. He was appointed a non-executive director of Northrup Grumman in 2009, the company that originally supplied and provides ongoing
technical support to the Trident II (D5) launcher system deployed on British and American submarines.

Sir Slater was a non-executive director and senior advisor between 2000 and 2008, according to CAAT. He was First Sea Lord between 1995 and 1998 and had previously been assistant chief of the defence staff (policy and nuclear) at the MoD.

Other individuals who worked in senior nuclear-related roles at the MoD and went on to work for companies involved with Trident include: BAE’s managing director – submarines between 2013 and 2016, who was previously director of nuclear propulsion at the Ministry of Defence and also worked in the MoD’s procurement executive; BAE’s director of strategic weapons, appointed in 2014, who
was previously head of chemical, biological, radiological and nuclear (CBRN) policy at the MoD; and Jacobs Engineering’s executive director of technology and defence business unit, appointed in 2012, who was previously controller of the Navy.

The revolving door is a key enabler of the cosy relationship that arms companies enjoy with government. As the case of Trident renewal shows, this network of influence “warps government priorities in favour of private commercial interests and leads to the public interest becoming conflated with corporate interests, preventing a proper debate about policies that would do more for the long-term security of people in the UK and elsewhere”.

The Trident successor programme will cost around £205bn over 30 years, including £41bn on the new submarines, £4bn on replacement nuclear warheads and £350m on a
programme to extend the life of the submarine-launched ballistic missiles.

The British government could have chosen to spend this money building hundreds of thousands of badly needed new houses, creating millions of jobs through investment in green and social infrastructure, or employing more than 150,000 new NHS nurses.

Instead, we are committed to funding weapons of mass destruction which cannot actually defend us from the most pressing threats to our security, such as climate change, cyber warfare and terrorism, and which, in fact, increase global insecurity by encouraging other countries to proliferate.