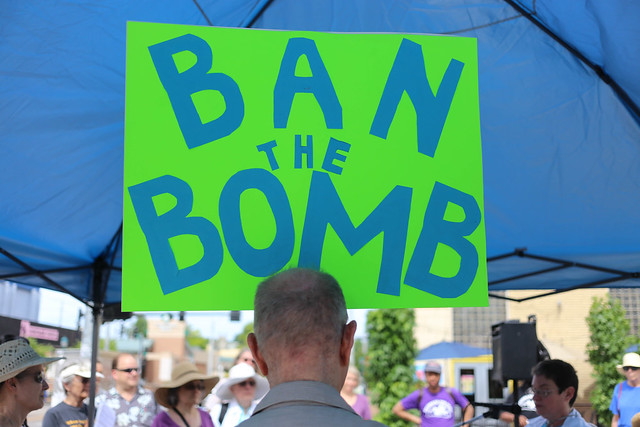 Linda Pearson, Don’t Bank on the Bomb Scotland campaigner, says that Renfrewshire Council’s call to divest their pension fund investment in nukes could set a very significant precedent at a crucial time for the global anti-nuclear weapons movement

ON 9 MAY, Renfrewshire council passed a resolution calling on Strathclyde Pension Fund to divest from companies that produce nuclear weapons.  The resolution is the first of its kind in the UK and marks a significant step forward for the nuclear weapons divestment campaign.

Scottish local authority pension funds held shares worth nearly £300 million in nuclear weapons companies in 2018. Over £100 million of that was held by Strathclyde Pension Fund, one of the largest local authority funds in the UK. Other Scottish financial institutions, Royal Bank of Scotland Group, Standard Life Aberdeen and Lloyds Banking Group (which includes Bank of Scotland), have made financing worth at least £4.7 billion available to nuclear weapons producers since 2014.

These investments support an industry that diverts public resources away from socially beneficial projects towards the production of weapons of mass destruction. With the risk of nuclear conflict now at its highest since the Cold War, the need for nuclear weapons divestment is more urgent than ever.

In April, the Nuclear Information Service (NIS) published a new report that documents the mounting problems facing Britain’s Trident renewal programme. The report predicts that the project will cost at least £172bn between 2019 and 2070, which is four times more than official projections.

This is a conservative estimate, the report emphasises, as it does not take into account the long list of risks identified in the report. These include the potential for delays that have a knock-on effect on other parts of the programme, currency fluctuations which could increase the cost of imported key components, and a repeat of the poor contractor performance which has frequently beset Ministry of Defence (MoD) projects.

Trident’s reliance on monopoly providers makes it hard for the MoD to secure value for money. Just four contractors, BAE Systems, Rolls Royce, Babcock International and AWE Ltd (a consortium of Lockheed Martin, Jacobs Engineering and Serco), together hold 97 per cent of the MoD’s nuclear-related contracts, most of which were awarded non-competitively. As the NIS report states, “the interest of these contractors in maximising the profitability of their work is in direct conflict with the MoD’s desire to make savings”.

Taxpayers lose out in this dynamic but private investors gain and Scottish banks, pension funds and universities have invested hundreds of millions of pounds in these companies over the last few years.

BAE Systems has two contracts with the British government for the design and production of the new nuclear-armed Dreadnought-class submarines worth over £3 billion pounds. RBS, Lloyds and Standard Life Aberdeen have provided financing worth £357 million to BAE since 2014. Falkirk, Tayside and Fife local authority pension funds and the Universities of Glasgow and Strathclyde held shares worth a total of £15 million in the company in 2018.

READ MORE: Renfrewshire Council becomes first in UK to call on its Pension Fund to divest from nuclear weapons

Rolls Royce is involved in the design of the Dreadnought submarines and will manufacture their new PWR3 nuclear reactors. The Scottish Parliamentary Pension Scheme, which manages the contributions of MSPs, holds shares in Rolls Royce while seven of the 11 Scottish local government pension funds and the University of Glasgow held shares in the company worth £52 million in 2018.

Lockheed Martin is involved in Britain’s nuclear weapons programme through its 51 per cent stake in AWE Ltd and through contracts related to the Trident II D5 missiles that are deployed on British and American submarines. Lockheed received financing to the tune of £778 million from Lloyds Banking Group between 2014 and 2017 and £90 million from RBS Group. Lothian Pension Fund owned shares worth £75 million in Lockheed as at 30 September 2018, while Strathclyde Pension Fund and the University of Glasgow held shares worth over £1.4 million in the company.

The NIS report concludes that as the MoD simply does not have the budget to pay for Trident renewal on top of all its other projects, the government will soon have to choose between cutting conventional defence spending to fund Trident, increasing the MoD budget by reducing spending in other areas, or scrapping the programme altogether.

This means that we could see austerity-affected public services cut even further to pay for nuclear weapons. The SNP estimates that Scotland pays £187 million a year towards Trident, money that could instead fund the training of 750 nurses, 370 police officers, 1,500 teachers and 235 doctors.

Britain is not the only country with warped spending priorities. The International Campaign for the Abolition of Nuclear Weapons (ICAN) estimates that the nine nuclear-armed nations together spend roughly £231 million a day on their nuclear forces. This looks set to increase as each state undertakes plans to “modernise” its nuclear arsenal.

The US is expected to spend an eyewatering $1.7 trillion over a 30-year period replacing its nuclear “triad” of ground, sea and air-launched nuclear weapons. France is expected to nearly double the amount it spends on nuclear weapons by 2025 as it pays for new submarines, aircraft, warheads and missiles.

The proportion of Russia’s defence budget that is spent on nuclear weapons has grown steadily in recent years, according to the Stockholm International Peace Research Institute. New weapons under development include “Satan 2”, a thermonuclear intercontinental ballistic missile with supposedly unlimited range, and the Poseidon, a nuclear-armed, underwater drone.

Meanwhile, China, India, North Korea and Pakistan are believed to be expanding the size of their nuclear arsenals. Israel refuses to acknowledge the existence of its nuclear weapons programme and no reliable estimate of its current spending is available.

A new report by PAX and the International Campaign to Abolish Nuclear Weapons (ICAN), ‘Producing Mass Destruction’, profiles 28 companies that are making a killing from this new nuclear arms race. Together, they hold contracts worth US$116 billion (£89 billion) for the development, production and maintenance of nuclear weapons. This figure is likely to be an underestimate as the details of some contracts have been kept secret and the report does not cover contracts related to the making of delivery platforms that are built specifically to carry nuclear weapons, such as Britain’s Dreadnought submarines.

Arms control measures are bad for the nuclear weapons business and heightened geopolitical tensions create opportunities for lucrative sales. The report shows that Washington signed over 100 contracts together worth more than £766 million with six nuclear weapons producers in the three months following President Trump’s October 2018 announcement that the US would withdraw from the Intermediate-Range Nuclear Forces Treaty. The INF treaty eliminated all of the US and Russia’s land-based nuclear weapons within a certain range and had lasted for over 30 years.

Many of the companies profiled in the report are involved in the production of new nuclear weapons, such as the US’s Long-Range Standoff Weapon and the French ASN4G missile. These companies are “profiting from putting humanity at risk, gambling with our survival”, as ICAN Director, Beatrice Fihn, writes in the foreward to the report. Their investors are profiting too, through returns that are dependent, in part, on the companies’ nuclear weapons work.

Scottish banks and pension funds have invested heavily in the companies profiled in the report.

BAE Systems and Lockheed Martin (investments listed above) are both involved in the development of new nuclear weapons and between them have received 43 contracts worth $315 million following the INF withdrawal announcement.

Councillor Audrey Doig, who put forward Renfrewshire resolution, said: “In what is a dangerous and unstable world, it is really important that councils stand up for doing things differently and encourage multilateral nuclear disarmament and divestment from companies involved in developing the ultimate weapon of mass destruction. By such actions we help to solve the ‘nuclear emergency’”.

Strathclyde Pension Fund manages the contributions of employees from a total of 12 local authorities. If each of these councils were to follow Renfrewshire’s example and pass a resolution in support of nuclear weapons divestment, the fund could be forced to change its investment policy. And if a fund the size of Strathclyde were to divest, others local government pension funds would likely follow.

Each decision to divest helps to delegitimise nuclear weapons and gives momentum to the global movement for nuclear disarmament. Scottish councils can lead the way.