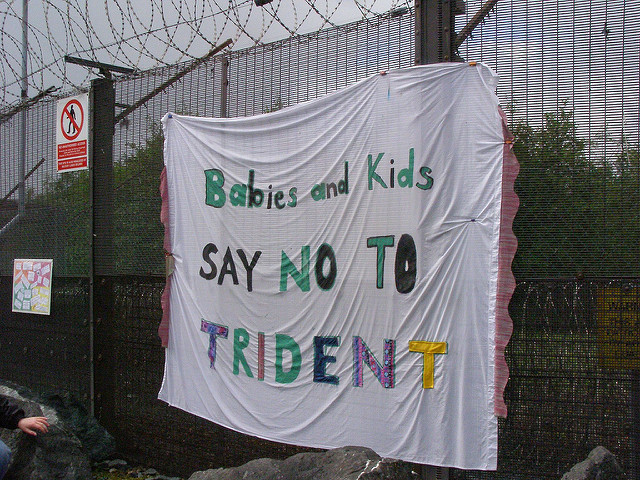 Linda Pearson, anti-nukes activist, says that MSPs are effectively profiting from Trident due to the Scottish Parliament’s pension fund investments – they should re-invest the money into projects which make Scotland a better place to live

RESEARCH published by Don’t Bank on the Bomb Scotland in September this year revealed the extent of Scotland’s investments in nuclear weapons companies, including shares worth nearly £300 million held by the Scottish local government pension funds. This week, new analysis by The Ferret showed that the Scottish Parliamentary Pension Scheme (SPPS) holds shares worth £2 million in fossil fuels, arms and tobacco companies. This includes £175,495 in Rolls Royce, one of four key contractors involved in Britain’s Trident nuclear weapons program.

The continuing existential threat posed by nuclear weapons and the recent negotiation of the Treaty on the Prohibition of Nuclear Weapons make these investments increasingly untenable. Scottish pension funds should instead fund projects which promote human security and help to secure a sustainable future for their members and for the rest of Scotland.

Most Members of the Scottish Parliament are opposed to nuclear weapons but while their pension fund holds shares in Rolls Royce, MSPs are effectively profiting from Britain’s Trident nuclear weapons program.

Rolls Royce is the only company in Britain capable of manufacturing nuclear reactors for the Royal Navy’s nuclear-powered submarines and currently has contracts for work on the Ministry of Defence’s nuclear programs worth £4.7 billion. The company was involved in the development of the current fleet of nuclear-armed Vanguard class submarines and has been working with Babcock International and BAE Systems on the development of the successor, Dreadnought class, submarines since 2007.

The contract to to design, develop and manufacture the Dreadnought’s new PWR3 nuclear reactors, reportedly the second largest of all the company’s current projects, is worth £1,082 million. Rolls Royce also has a £938 million contract to upgrade the core production capability (CPC) facilities at Raynesway in Derby, where the reactor cores will be manufactured. According to its annual report, revenue generated by Rolls Royce’s civilian and military nuclear work increased by 4 per cent in 2017 to £818 million, “driven mainly by increased production activity in support of the Dreadnought class build programme”.

Scottish local authorities together hold shares worth £52 million in Rolls Royce. Their other investments in nuclear weapons companies include £88 million worth of shares in Lockheed Martin, which makes the Trident II (D5) nuclear missiles for the US and Britain, and £14 million worth of shares in BAE Systems, which is building the new submarines.

Evidence suggests that there is strong support for nuclear weapons divestment in Scotland. Opposition to nuclear weapons is widespread and a March 2018 poll found that 72 per cent of Scots think that the Scottish Parliamentary Pension Scheme should divest from arms manufacturers, like Rolls Royce, and from tobacco and fossil fuel companies.

At UK level, there is a growing movement of people demanding more say over how pensions are invested. Advocacy organisation, ShareAction, recently mobilised more than 3,400 responses to a UK government consultation on clarifying and strengthening pension fund trustees’ investment duties.  Meanwhile, more than 200 Members of the UK Parliament, including a cross-party group of Scottish MPs, have called on the parliament’s pension fund to divest from fossil fuels.

The case for divestment from nuclear weapons has been strengthened further by the negotiation of the Treaty on the Prohibition of Nuclear Weapons in 2017. The treaty prohibits the development, production, testing, possession and use of nuclear weapons, and prohibits assistance with these acts – a provision that includes financing. The treaty has re-focused attention on the unethical nature of investing in the world’s most destructive weapons and has increased the financial risk of investing in the companies that produce them, since it represents a step towards eliminating nuclear weapons and therefore the industry that supports them.

POLICY – Divest¦Reinvest: Scottish Council Pensions for a future worth living in

Financial institutions around the world are already changing their investment policies in response to the treaty, which is set to enter into force within the next two years. This year, major Belgian bank KBC announced that it would exclude all nuclear weapon producers from investment, citing the treaty. Other notable examples include Dutch pension fund ABP, which announced in January 2018 that it would take steps to exclude nuclear weapons.

First Minister Nicola Sturgeon and a majority of MSPs have signed a parliamentary pledge in support of the treaty. If members of the Scottish Parliament’s pension fund were consulted about their pension fund’s investment policy, as Scottish Greens MSP John Finnie argues they should be, it is unlikely that those who oppose nuclear weapons would support continued investment in a key Trident contractor.

One of the most common reasons given by pension funds for refusing to divest from harmful industries is that fund trustees have a fiduciary duty to act in the best interests of their members. However, this should not mean simply seeking the highest short-term financial returns. Nobody’s interests are served by the continuing production of weapons that could be used to destroy the planet several times over.

The world’s nine nuclear-armed states are maintaining and “modernising” their nuclear arsenals. New, more “useable” type of nuclear weapons are being developed and the international arms control regime is under serious strain. The threat of nuclear war is greater than it has been since 1953, according to the Bulletin of Atomic Scientists. Pension funds that invest in nuclear weapons companies are therefore profiting from activities which put their members, and the rest of humanity, in grave danger.

In addition to the threat of physical harm, the development and maintenance of nuclear weapons causes serious social harm by diverting vast amounts of resources away from public programs that benefit everyone. While a fifth of the British population lives in poverty and four million use food banks, the government is spending £205 billion on a project that serves no legitimate defensive purpose.

The Ministry of Defence (MoD) will spend 14 per cent (£5.2 billion) of its entire budget on nuclear projects in 2018-2019, according to the National Audit Office (NAO). The NAO has repeatedly warned that the cost of the nuclear program could destabilise the MoD’s budget’s and these concerns were echoed by the UK Parliament’s public accounts committee in September.

The program’s reliance on monopoly providers makes it harder for the MoD to achieve value for money and the department acknowledges that their past performance has been poor. Difficulties with key projects in the successor program has already pushed costs up. The work to upgrade the Core Production Capability project at Ranesway is being carried out by Rolls Royce but is funded by the MoD. The UK Government’s Infrastructure and Projects Authority (IPA) has rated the project red, meaning that “successful delivery of the project appears to be unachievable”, for the last two years while the Dreadnought project has been rated amber –  “successful delivery of the project is in doubt” – since 2015. Meanwhile, upgrades to the warhead assembly facility at Burghfield are six years behind schedule and the cost of the project has increased by 146 per cent.

Chancellor Philip Hammond announced in the Autumn Budget that the MoD would be given an extra £1 billion for 2018-2019, £400 million of which has now been allocated to the Dreadnought program. The move was intended to mitigate anticipated funding shortfalls and to head off a rebellion by a group of Tory MPs who claim that Britain will end up “like Switzerland or Norway, with a couple of tanks and a rowing boat” if military spending is not increased. However, as CND Acting General Secretary Sara Medi Jones said, the decision “prioritises war and nuclear weapons over people and their needs”.

The money invested in nuclear weapons companies by the Scottish Parliamentary Pension Scheme and Scottish local authorities could be used to fund projects that will make Scotland worth living in for pension fund members and for the rest of us.

READ MORE: Divest and reinvest: 6 local governments that are innovating for sustainability

A recent report by Common Weal, UNISON and Friends of the Earth Scotland argued that Scottish local authority pension funds should divest from fossil fuel companies and reinvest in socially and environmentally beneficial projects, like social housing and renewable energy. These areas are urgently in need of investment but the report found only three councils with investments in them, totalling just 0.7 per cent of the Scottish Local Government Pension’s Scheme’s value, while £1.6 billion (4.8 per cent) of the fund is invested in fossil fuels. The report therefore recommends that councils adopt a policy of divestment and reinvestment in their Statement of Investment Principles, which sets out the fund’s investment strategy.