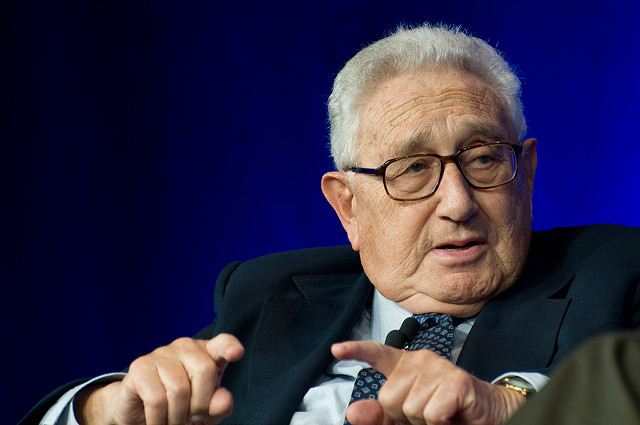 Linda Pearson (@Pearson_LM), Common Weal policy officer and peace campaigner, says it was wrong for Nicola Sturgeon to praise two former US Secretary of State’s who have never been held to account for their role in US war crimes

WHEN US President Donald Trump finally visits the UK this week, he will likely be met by the largest mass mobilisation that the country has seen since in the Iraq war protests of 2003. Hundreds of thousands of people will take to the streets to oppose the racism, misogyny and authoritarianism Trump represents.

Scotland’s First Minister Nicola Sturgeon has been critical of Trump’s rhetoric and policies. In early 2017 she called for a planned state visit by Trump to be cancelled after he banned travel to the US from several majority Muslim countries, saying that the UK’s relationship with the US “has to be based on values”.

It was therefore disconcerting this morning to see a tweet from the First Minister enthusiastically recommending an article written by former US Secretary of State Henry Kissinger. The piece on “the philosophical questions that Artificial Intelligence poses for the human race” will “get your intellectual juices flowing this Monday morning”, Sturgeon wrote.

If you want something non party political to get your intellectual juices flowing this Monday morning, I recommend this by Henry Kissinger on the philosophical questions that Artificial Intelligence poses for the human race. https://t.co/5COtL1vlY7

Former US Secretary of State Kissinger is possibly America’s most notorious untried war criminal, with the blood of several million people on his hands. Between January 1969 and January 1973, Kissinger oversaw the largest bombing campaign in history in Indochina, leaving six million people dead, wounded or displaced. Kissinger helped to bring about the Indonesian invasion of East Timor in 1975, which resulted in the massacre of a third of the island’s population. He supported death squads throughout Latin America and was one of the architects of the coup in Chile which deposed President Salvador Allende in 1975 and ushered in the murderous dictatorship of Augusto Pinochet. These are just a few of Kissinger’s crimes.

By tweeting out an article by Kissinger on Artificial Intelligence, our First Minister was not endorsing or excusing his actions as US Secretary of State. But the problem with promoting the views of individuals like Kissinger, on any subject, is that it whitewashes their crimes and helps to uphold a culture of elite immunity.

As Glen Greenwald documented in his book, “With Liberty and Justice for Some: How the Law is Used to Destroy Equality and Protect the Powerful”, US elites have succeeded in exempting themselves from the laws that apply to other Americans. This manifested itself in President General Ford’s pardon of Richard Nixon and continued with the pardoning of senior officials involved in the Iran-Contra affair. More recently, President Barak Obama’s promised not to prosecute the Bush administration officials who oversaw a worldwide secret U.S. torture regime and his administration failed to prosecute the bankers whose fraudulent activities helped to bring about the 2008 financial crisis.

Instead of facing criminal prosecution, the likes of Kissinger are feted as elder statesmen and allowed to enrich themselves in lucrative post-government careers. Former British Prime Minister Tony Blair started an illegal war of aggression which claimed the lives of 1 million Iraqis. Since leaving office, Blair has made millions from consultancy work and public speaking tours, while the “liberal” media continues to publish his opinion pieces.

As history shows, the failure to hold Western leaders to account for war crimes and human rights abuses permits a certain kind of foreign policy, one that allows millions of lives to be sacrificed to advance the interests of a small ruling elite. 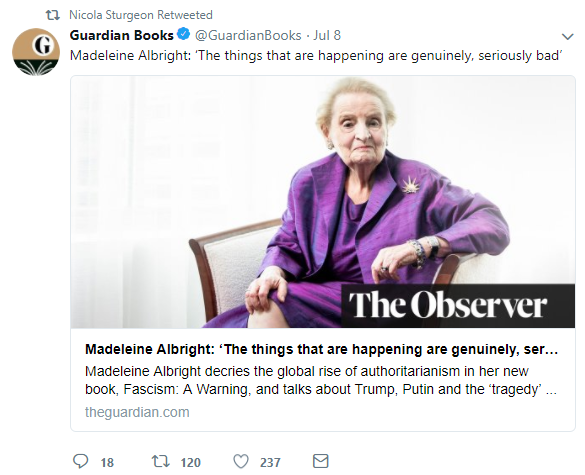 After the Kissinger tweet, Sturgeon posted an interview with another former US Secretary of State, Madeleine Albright. Regarded as a “distinguished elder stateswomen” by the liberal establishment, Albright presided over the imposition of “genocidal” sanctions on Iraq in the 1990s. Asked about the resulting death of over half a million Iraqi children, Albright infamously said that “the price is worth it”.

Trump promised a less interventionist policy but has shown no sign of a move away from the key principle that has underpinned US foreign policy since Kissinger: might makes right. Under Trump, the largest non-nuclear bomb in history on was dropped on Afghanistan in 2017. In 2018, Trump launched air strikes on Assad forces in Syria which were illegal under US and international law.  His recent Nuclear Posture Review laid out plans to develop smaller, more usable nuclear weapons and lowered the threshold for launching a nuclear strike.  He has continued the long-standing US policy of backing dictators who support US interests, a tactic favoured by Kissinger.

However, the failure to hold the rich and powerful to account for their wronging has had a broader impact on US politics. It has helped to undermine the legitimacy of democratic institutions in the United States, which in turn, contributed to the rise of Trump.

In the interview which Sturgeon posted, Albright discusses her new book Fascism: A Warning, which draws comparisons between Trump’s administration and past dictatorships. Given Albright’s position, the First Minister’s tweet was likely intended as a dig at the current US President ahead of his visit. However, it is misguided to look to establishment figures like Madelaine Albright to effectively challenge the right-wing movement that Trump represents. We can only look to a mass movement which demands democracy, social justice and equality before the law.