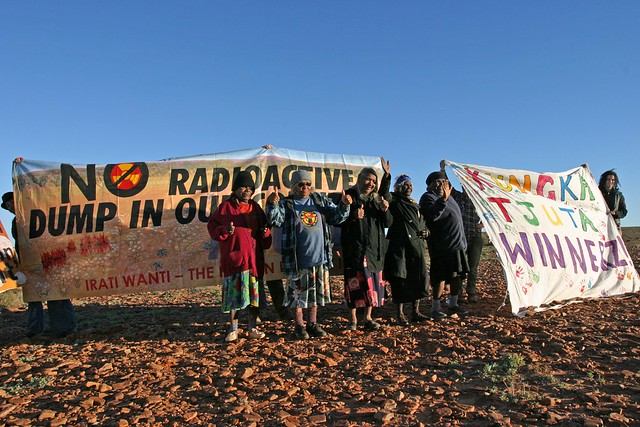 As the British Government is set to celebrate 50 years of Trident, anti-nukes activist Linda Pearson argues they should instead be apologising for the impact of British nuclear weapons testing on Aboriginal communities in Australia – and halting plans to transfer nuclear waste from Dounreay to Australia now

THE Royal Navy’s plan to hold a “national services of thanksgiving” at Westminster Abbey to mark 50 years of Britain’s submarine-based nuclear weapons has provoked condemnation from senior clergy and peace campaigners.

CND General Secretary, Kate Hudson, says that the plan is “morally repugnant” and the organisation is urging supporters to convey their opposition to Defence Secretary, Gavin Williamson. Two Bishops and more than 20 priests have called on Westminster Abbey to cancel the service, which is set to take place on 3 May.

The Ministry of Defence has denied that the service will celebrate weapons of mass destruction. The invitation sent to Naval chiefs, senior ministers and former submariners describes the event as a service to mark “50 years of the Continuous at Sea Deterrent…recognising all those individuals and organisations who have made a significant contribution to defending the nation as part of this mission”.

READ MORE: ‘No Nato in Scotland, No Scotland in Nato’: Edinburgh and Glasgow protests on 70th anniversary

The rhetoric of “deterrence” and “defence” is routinely invoked by nuclear armed states to obscure the horrifying truth about nuclear weapons and justify national security doctrines that rely on them. Nuclear weapons are unique in their destructive power; “designed to indiscriminately kill and destroy thousands of innocent civilians”, as the Bishop of Colchester told The Times last week. This reality was recognised by a majority of the world’s countries who voted to ban nuclear weapons in 2017.

In fact, Britain’s nuclear weapons programme has already destroyed the lives of countless innocent civilians. Over 1,200 Indigenous Australians were exposed to radiation during British nuclear weapons testing in the 1950s and 1960s, while many others were displaced. The effects continue to be experienced by their families today. Some are now calling on the British Government to apologise for the testing, instead of celebrating Trident.

The British Government conducted a total of 12 major nuclear weapons tests in Australia at the Montebello Islands and at Emu Field and Maralinga in South Australia.

After securing the agreement of the Australian Government, the British established a permanent test site at Maralinga in 1955.  Seven major and several hundred “minor” tests were carried out there, releasing 100kg of radioactive materials into the surrounding area.

The British and Australian governments of the day demonstrated a callous disregard for the lives of Aboriginal people that is characteristic of the settler-colonial mindset. Permission to conduct the testing was not sought from Aboriginal landowners and the Australian Government decided that they should not be informed of the risks. When an Australian scientist asked British authorities about the potential danger to local Aboriginal people, the response was that “a dying race couldn’t influence the defence of Western civilisation”.

Many Aboriginal people were forcibly removed from their land prior to the tests, destroying their way of life. Others experienced serious health issues as a result of their exposure to radiation.

Yankunytjatjara man, Yami Lester, went blind after a “black mist” from the explosions enveloped his country. Others experienced skin rashes, diarrhea and vomiting. Today, Aboriginal communities in the area experience high rates of diseases associated with the effects of radiation poisoning.

Yami Lester’s daughter, Karina Lester, and her family played a crucial role in the International Campaign to Abolish Nuclear Weapons (ICAN). They collected and shared stories from the survivors of nuclear weapons testing which were instrumental in convincing 122 states that the only safe way to deal with nuclear weapons is to eliminate them.

ICAN won the Nobel Peace Prize for its efforts to bring about the 2017 UN Treaty on the Prohibition of Nuclear Weapons. The historic treaty recognises “the disproportionate impact of nuclear-weapon activities on Indigenous peoples”. The British and Australian governments boycotted the UN negotiations, however, and have ruled out signing the treaty.

No cause for celebration

Karina Lester says that “survivors of the British Nuclear Tests carried out on Australian soil in the 1950’s and 1960’s in South Australia’s outback are still haunted. The Indigenous communities still suffer with high numbers of deaths, cancers, respiratory illnesses and auto immune disease.”

Several attempts to clean up the Marlinga site have been made by British and Australian governments, thanks to the campaigning of survivors like Yami Lester, but contamination at the site remains. In 1995, Aboriginal peoples received just £7.5 million for the loss and contamination of their land. Only £110,000 has been paid to five Aboriginal people to compensate for their exposure to radiation. A class action was blocked by the UK Supreme Court in 2013.

Karina Lester says that the affected communities “have had no apology for the wrongdoings on our traditional lands to this day. As the British Government celebrates 50 years with nuclear weapons, Australia’s Indigenous communities in South Australia wears the scars.”

Instead of celebrating, Lester says, “we Indigenous South Australians urge the British Government to own up and apologise for your actions.”

Aboriginal communities in South Australia now fear that they will be forced to bear the risks of radioactive contamination again. The Australian Government is currently considering three sites for the location of a national nuclear waste dump, two on Barngarla land, near Kimba, and one on Adnyamathanha land at Wallerberdina Station near the Finders ranges.

It is intended that the dump will host nuclear material that is currently stored at different sites within Australia, plus waste that is due to be shipped to from the UK pursuant to a 2012 agreement between the British and Scottish governments. The agreement relates to waste generated by the reprocessing of Australian nuclear fuel at Dounreay. However, that waste is to remain where it is and a substituted amount will be shipped from Sellafield.

The views of traditional owners have been side-lined throughout the process for choosing the dump’s location and Adnyamathanha’s traditional owners say that federal government contractors have already damaged sacred sites. As a result, two separate human rights complaints are outstanding in Australian courts.

Campaigners have called on the British and Scottish governments to halt the shipment while there is a risk that it will end up dumped on Aboriginal land without the consent of the traditional owners. However, the UK Government say that the shipment “will comply with all relevant international laws” and the eventual destination of the waste is “a matter for the Australian authorities”. The Environment Agency has so far failed to respond to requests to halt the shipment of waste from Sellafield.

The Scottish Government has also failed to act to stop the shipment despite expert advice, commissioned by the government itself, which states that the Scottish Environment Protection Agency (SEPA) and, ultimately, Scottish ministers could refuse to authorise the shipment on human rights grounds.

Britain’s plans to celebrate 50 years of at-sea nukes erases the experience of Indigenous people affected by nuclear weapons testing. Those experiences should be front and centre in any discussion about nuclear weapons, as ICAN recognised.

Instead of celebrating, we should be looking at ways to redress the past and prevent future harm. Britain should apologise for its nuclear weapons testing and pay adequate compensation to those affected. The shipment of nuclear waste from Sellafield should be stopped.

But there’s only one way we can prevent more lives being destroyed by nuclear weapons and that’s by eliminating them altogether.

Picture courtesy of Friends of the Earth International