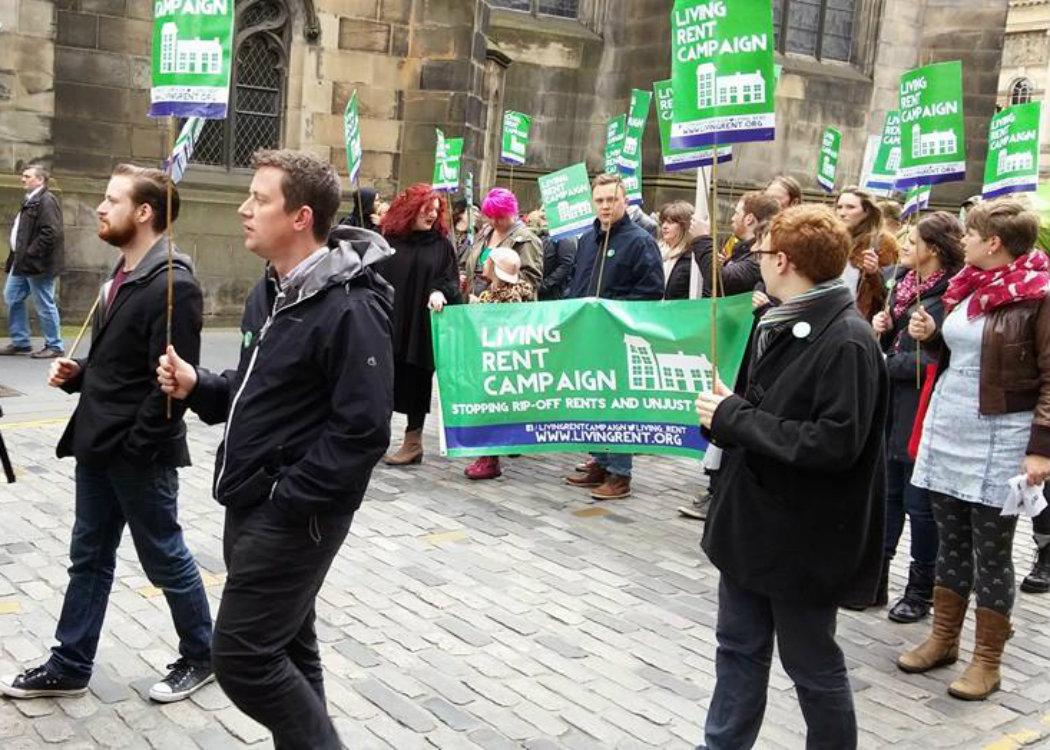 A HOMELESSNESS CRISIS, unaffordable rent, squalid conditions, damp, leaks, drafts and mould. This is the state of housing in Scotland 2015, and the Living Rent campaign seeks to change it.

The Living Rent Campaign initially came together in 2014 to submit key aims in response the Scottish Government’s forthcoming housing consultations.

The Living Rent Campaign wants to see short leases replaced with indefinite tenancies and measures put in place to protect vulnerable tenants against eviction. The group also calls for the introduction of a cap on rent prices, a policy excercised by most other European countries.

“We treat housing as if it’s separate to people’s health. In the last 40 years, housing in Britain has become a commodity to be traded,” Living Rent organiser Gordon Maloney tells CommonSpace.

“Damp flats, drafty houses and bug infestations are not just an inconvenience. They are killing people. In any other situation where a business worth billions in assets was killing people, we would be up in arms. This is a social issue.”

Living Rent is now a national campaign, with an established board and links to organisations and trade unions. It now has grassroots groups scattered around Scotland, and has established local and international networks.

“Living Rent is not just about consultations, but about raising awareness. It’s about making people aware that they can instigate change through Holyrood,” says fellow organiser Harriet Protheroe-Davis

Another of the group, Alasdair Clark, explains: “Before this campaign had started, few were familiar with the idea of rent controls. The voices that dominated housing issues were predominantly landlords. People need to understand that rent controls and just housing policy is logical, and a failure to adhere to these concerns should be condemned.”

“This is a class-based campaign… We cannot ignore this.” Harriet Protheroe-Davis, Living Rent Campaign

Since the beginning of the campaign, Living Rent has had a positive response across the board. Clarke, however, is quick to point out that it is easier to get support from parties who are not in government, and who probably will not be in government for a long time.

He adds that that despite many in the SNP supporting the cause, from Mhairi Black to Tommy Shepard, as the party of government, the SNP is expected to take longer to commit.

In terms of the long-term goals of Living Rent, organisers are keen to stress that the be all and end all of the campaign is not rent controls alone, but a wider change to the nature of the relationship between tenants and landlords. Maloney cites Sweden as an example of progressive housing policy, where tenants can negotiate rent in line with their requirements.

According to Clark, the conversation around housing and its problems was boosted by the Scottish independence referendum campaign, which dramatically increased political engagement across the board.

“We’ve seen incredible campaigns happening in England around housing rights. In Scotland, there wasn’t the same drive to change it. But during the referendum, social justice issues dominated. Post referendum, there was an opportunity to instigate these campaigns,” he says.

Protheroe-Davis adds: “This is a class-based campaign. Despite the financial market being key to the recession, housing continues to be interfered by markets at a time of desperate housing shortages. We cannot ignore this.”

From Mary Barbour and the direct action taken during the Red Clydeside era to Jimmy Reid’s Declaration of Intent protesting the implementation of the Rent Act, Scotland has a longstanding history of resistance to housing injustice.

Yet 100 years on, and it would seem that many of the today’s problems with housing mirror those of the past.