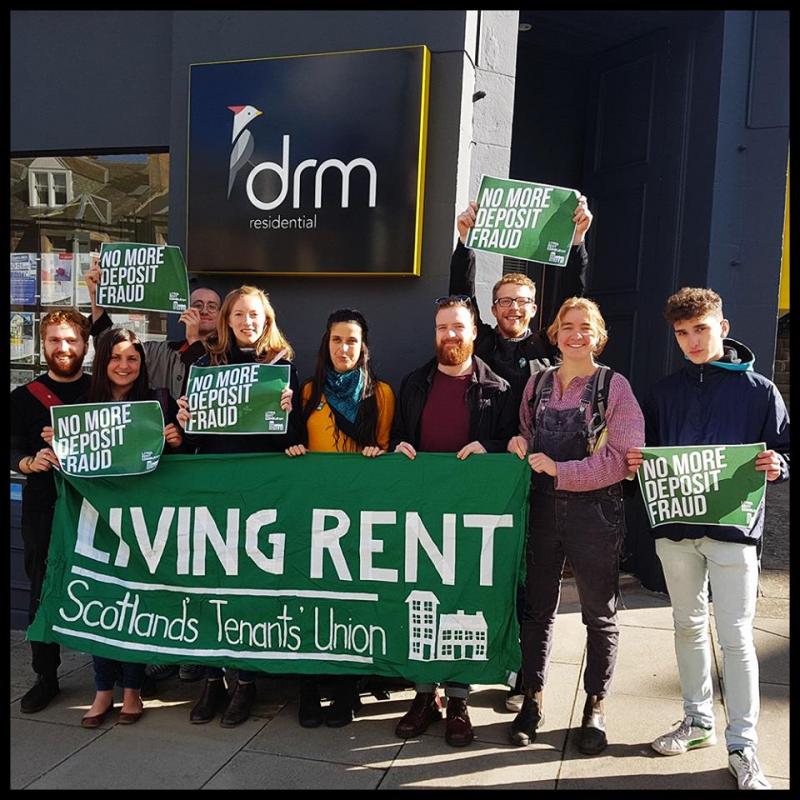 LIVING RENT, Scotland’s tenants’ union, has demanded that an Edinburgh letting agency drop a mandatory fee of £60, which is charged to all tenants if there are any claims at all on the deposit at the end of their tenancy.

The tenants’ union first became aware of the practice of ‘Post Tenancy Work Fees’ when one of their members approached them for aid in disputing some of the deductions to her deposit made by DRM Residential, the agency which oversaw her former rented accommodation.

Despite approaching DRM Residential with its objections and organising a protest action outside of the letting agency’s offices on 28 September, Living Rent has received no explanation for the unusual clause, which the group have told CommonSpace is included in all of their leases.

Edinburgh letting agents @drmresidential are charging tenants an outrageous £60 “post tenancy works fee” if there are any claims at all on their deposit. Avoid, avoid, avoid until they #droptheclause!

The legality of Post Tenancy Work Fees is unclear. Living Rent have told CommonSpace that they could be interpreted as a ‘premium fee’, or a fee beyond rent and a refundable deposit, despite the Scottish Government clarifying in 2012 that such fees were illegal.

Since the Scottish Government’s strengthening of Scotland’s rent laws however, Shelter Scotland, which launched the ‘Reclaim Your Fees’ campaign in 2012, have warned that they believe many letting agents have continued to charge such illegal fees.

Speaking to CommonSpace, Eilidh McIvor, a member of Living Rent Edinburgh, explained that the union’s involvement with the case began when a member of Living Rent “didn’t agree with the deductions that were being made [to her deposit], and to be honest, they were quite outrageous. Part of that was for this [Post Tenancy Works] Fee. So the focus of what we’re trying to do right now is to get them [DRM Residential] to remove it completely.

“It seems to be only DRM that use it; it’s a built-in clause to all their leases. So basically what it says is, if at the end of your tenancy, the flat or house requires any sort of cleaning, anything standard at the end of tenancy, they’ll either charge you £60 – £50, plus VAT – or ten per cent of the total costs of the works, whichever figure is higher. So basically, from the get-go, they’re asking tenants to agree to that.”

“We believe it be an extremely unfair, if not verging on illegal fee. It’s not justifiable at all, given that the amount of cleaning required for our member’s flat cost £20.” Living Rent member Eilidh McIvor

Elaborating on the legal background to such a clause, McIvor acknowledged that, “while it’s not technically a fee that’s connected to granting a tenancy, which is illegal, if they don’t sign a lease with that clause in it, they’re not getting the flat. So, technically, you could argue it is [a premium fee].”

Asked what response Living Rent had received from DRM Residential, McIvor said: “Nothing. We approached DRM on Friday, as a group, to talk through the problem. They basically refused to engage with us. We asked them to respond by the end of the day on Friday, and they didn’t; they still hadn’t responded yesterday. We’re giving them until the end of today, [after] we wrote to them again, asking them to review the case. We’ve still not heard anything back, as far as I know.”

Highlighting Living Rent’s campaigning efforts on the issue, McIvor continued: “One of the things we did after the action on Friday, was to start the #droptheclause hashtag, asking people on Facebook and Twitter to message DRM asking them to drop it.”

“DRM Residential may be the first agency Living Rent have encountered inserting such a clause into their leases, but that isn’t to say there isn’t anything similar out there,” she said.

“They justify it by saying arranging post-tenancy work – maintenance, cleaning, whatever – goes above and beyond their duties that they’re required to do, so they have to charge for it. We’re arguing against that – as letting agents, they are paid to manage properties, so we can’t for the life of us understand why that is justifiable.

“In terms of fraudulent deposit claims, we get it all the time – excessively high charges for minor amounts of cleaning. ‘Wear and tear’ is often what it is, rather than actual damage or breakage. Letting agents are trying all the time to make a claim for it as if it were damage, and that’s not what a deposit is for. We feel that letting agents are abusing that.”

READ MORE: New research reveals 1 in 3 Scots believe their homes are not up to standard

McIvor said it was “very positive” that Deposit Protection Schemes are now in existence, “because it does provide a third party arbitrator, but the process is very long. If there’s any kind of dispute when a landlord submits their proposal for deductions, a tenant has got a month to reply to that, and if they say, ‘No that’s not okay,’ the landlord’s got another month to reply to the tenant. After that, if it goes into a formal dispute process, it can last up to three months.

“The reality is, tenants can’t wait three months for their deposits to be returned. They’ve got other deposits to put down, they need to feed themselves and their families. So while it is positive that legislation is there, I think there’s a lot more to be done, and to reduce malpractice, because it’s happening all over Scotland it’s not acceptable. Tenants are getting ripped off, right, left and centre. But it doesn’t have to be this way and it shouldn’t be this way.”

Asked what further action Living Rent may take if DRM Residential offer no response by the end of today, McIvor said: “We will look to extend the #droptheclause campaign on social media, and if we get no response, we will go back as a group and demand answers. If it turns out they will not shift on it, we will support out member through the dispute procedure, and we’ll make sure that Safe Deposit Scotland is aware of what this Post Tenancy Work Fee clause is.

“We can’t see how they’re going to justify that to the deposit scheme, and we’ll make sure they fully understand we believe it be an extremely unfair, if not verging on illegal fee. It’s not justifiable at all, given that the amount of cleaning required for our member’s flat cost £20.”

DRM Residential did not respond to requests for comment by CommonSpace.