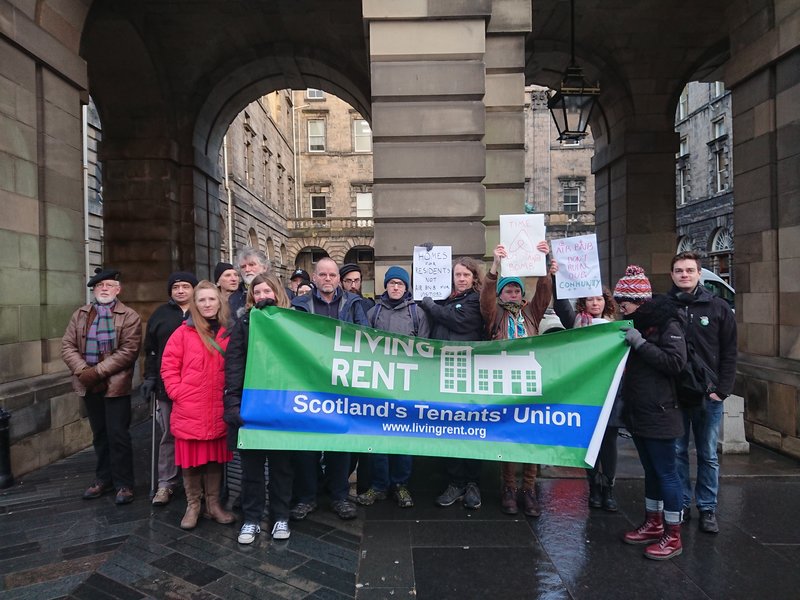 TENANTS UNION Living Rent held an emergency protest outside the City of Edinburgh Council chambers on Monday as Councillors met with a delegation from the holiday-let company Airbnb.

Airbnb met with Council officials ahead of the publication of a report into the impact of short-term lets in the capital. Living Rent say their members were excluded from earlier talks on the report and have expressed concern about the influence of large companies on the housing market.

The room-letting app acts as a broker between owners who can advertise their home online and travellers wishing to rent accommodation. Landlords who have rented out their properties through the system say it gives them more flexibility over entering longer-term contracts.

However, critics argue that the system removes much needed housing from the longer term rental market. Living Rent spokesperson Emma Saunders said: ”It is about time Edinburgh City councillors organise a proper consultation to solve the housing crisis and Edinburgh, and this will come through listening to Edinburgh residents.

“Airbnb organised a last-minute meeting in Edinburgh with members of the City Council when tenants across the city have been excluded from any plans involving solutions to the crisis around short term lets which are pushing already unaffordable rents even higher.

“The short-term let sector is hovering up vital homes and renting them out at extortionate rates, luring in more and more landlords to take the chance on short term financial gain rather than providing decent affordable housing to residents.”

Data from Inside Airbnb showed that over 5000 properties were advertised to let on the platform.

READ MORE: Edinburgh rents are third most expensive in UK

Scottish Green MSP Andy Wightman supported the action by Living Rent and said he was at the protest to stand in solidarity with those affected by a failing housing system in the City: “The availability and affordability of homes in Edinburgh is worsening by the month & short-term lets are exacerbating this.”

Cllr Gavin Barrie, Housing and Economy Convener for Edinburgh Council said: “In December, the Council unanimously agreed a motion regarding short term lets. This morning I chaired a meeting to give councillors, officers and AirBnB the opportunity to discuss future regulation of the short-term let industry.

“The meeting was very helpful and we will now work with officers on proposals, which will also be informed by the Scottish Government’s report, which will go to a future Committee meeting.

“In order that we can find the right solution for Edinburgh we will also continue to work with industry groups and the Scottish Government regarding regulation going forward.”