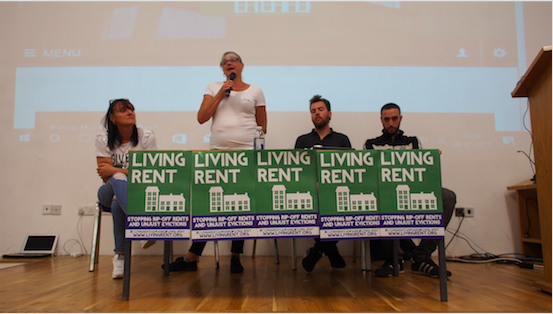 Union launch in Glasgow after rise in calls for help

THE Living Rent Union celebrated its launch in Glasgow earlier this week and is looking to grow membership numbers as it tackles problems tenants have with private landlords.

Set up as a campaign group in 2014, the organisation has grown into a union after a huge increase in calls from leaseholders having trouble with landlords and letting agents.

Run almost completely by volunteers, the group employs one part-time staff member, Sean Baillie, and represents anyone who seeks legal advice or, in some cases, arranges direct action.

Anyone asking for representation is asked to join by paying a monthly fee ranging from £3-£10.

“By further action we would tend to mean direct action, which would mean putting on pressure publicly – normally a picket with a petition.” Rebecca Chan

Speaking to CommonSpace, Rebecca Chan from Living Rent said: “What we’ve done in the past is either give them (landlords, letting agents) a ring or send them a letter saying that one of our members has come to us with this problem, and we would try and negotiate depending on what the specific issue is.

“If it was something that was illegal, like legal fees or withholding someone’s deposit back anything like that, we will point out that we know this is illegal and ask them to sort it out in a certain timeframe or we will take further action.

“By further action we would tend mean direct action, which would mean putting on pressure publicly – normally a picket with a petition.”

Based in Edinburgh and Glasgow, the group has already successfully represented members in cases against letting agents and landlords and urges anyone who thinks they may have a case to get in touch.

Chan said: “You don’t have any kind of power when you’re a tenant and that’s one of the reasons Living Rent’s here.

“There’s no one to represent or advocate on behalf of tenants and you can feel at the mercy of your landlord and you can be chucked out – although the legislation is changing and you won’t be able to just be chucked out.”

The Private Housing (Tenancies) (Scotland) Act 2016 is expected to come into force in December of this year and was passed to regulate the private rental market.

Documents on the Scottish Government website state: “This will be known as a ‘private residential tenancy’ and its purpose is to improve security for you as a tenant and provide safeguards for landlords, lenders and investors.”

Chan added that anyone needing urgent help need not be an existing member in order to qualify for help from the union: “If someone’s just getting in touch for legal advice we would tend to reply with an email and if they want further advice we would ask them to join up,” she said. “But if someone’s getting evicted we wouldn’t do that.”

You can find more out more information on Living Rent’s website.