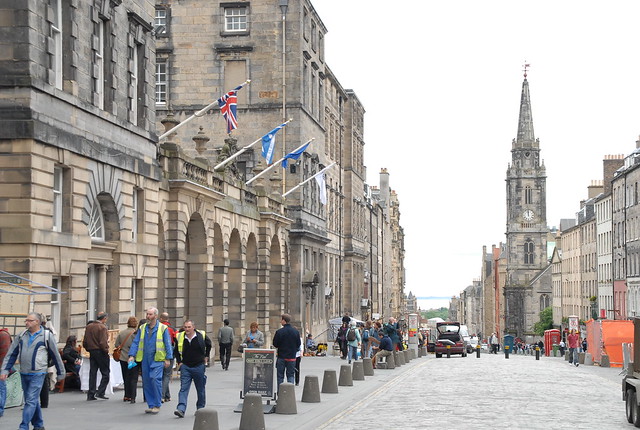 THE LIVING RENT tenants’ union has condemned recently tabled plans to convert former offices of Edinburgh City Council into serviced holiday apartments, describing the move a continuation of the capital’s “transformation into a space solely for consumption and profit.”

Earlier this week it was reported that Lateral City Limited aim to secure a long-term lease deal with Edinburgh’s local authority to transform 329 High Street, an A-listed 18th century building and recognisable landmark of the city’s Old Town, into 24 holiday lets.

If approved, these plans would see the structure turned into apartments, with retail, restaurant and bar space installed on the ground floor, basement and mezzanine levels. The development will, according to a Lateral City Ltd planning statement, “compliment and expand the existing serviced apartments at Old Town Chambers, located to the rear of the site.”

Council reports have expressed hope that a long-term lease arrangement would allow Edinburgh City Council to “retain ownership and control over future use”.

Edinburgh City Council’s finance and resources convener Cllr Alasdair Rankin commented on the proposal: “It is important that we make the best use of all of our buildings and maximise income to allow us to deliver essential front-line services such education and caring for the elderly. This is done where we can when buildings are no longer needed for council business.

However, the proposal has proved controversial against the backdrop of Edinburgh’s housing crisis and infamous short-term let sector, the extraordinary growth of which was cited by First Minister Nicola Sturgeon in her announcement in April that the Scottish Government would establish a new public consultation to “control the number of lets and ensure they make a contribution to the services they use”.

Speaking to CommonSpace, Megan Bishop of the Living Rent Edinburgh branch, said of the High Street development proposal: “At first these plans seem like a joke. This marks another step in Edinburgh’s transformation into a space solely for consumption and profit through tourism.

“The city doesn’t need any more holiday lets – instead the council should focus on better regulating those that already exist to ensure the protection of tenants and tourists alike.” Living Rent Edinburgh member Megan Bishop

“The city doesn’t need any more holiday lets – instead the council should focus on better regulating those that already exist to ensure the protection of tenants and tourists alike, rather than building more.

Bishop continued: “The council say these proposals wouldn’t be a drain on the housing in the Old Town, but housing has already been pushed far beyond breaking point. There is no reason why this space couldn’t be used for much needed social housing, for those of us who live and work in the city all year round and are being forced out by holiday lets.”

Green Cllr Claire Miller, who represents Edinburgh’s City Centre, also told CommonSpace: “I have already publicly stated my opinion that more holiday lets in the city centre are not required, and indeed would be detrimental to the shrinking community living in this neighbourhood.

“As economy spokesperson in the Green group, I know that the range of commercial property required in the city includes uses such as flexible workspaces for entrepreneurs and start-ups, and in particular in locations with top class transport connections. In the heart of the city centre, within sight of Waverley Station, trams and almost all bus services, it is hard to think of a better location for this kind of workspace.

“This is just one example of how this space could meet a need that exists in the city, rather than contributing to problems that the council is trying to fight.”

After the UK Housing Review found in April that Edinburgh now contains 10,000 Airbnbs – one for every 48 people in the city – Edinburgh City Council’s housing and economy convenor Kate Campbell indicated to CommonSpace that the figure for the capital may be even higher, with their research placing the number of Airbnbs at 12,000, in comparison with Scottish Government figures which found 9,000.

Campbell told CommonSpace: “Short term lets are having a terrible impact. They’re hollowing out communities, both in the city centre and increasingly across Edinburgh. Residents are putting up with high levels of anti-social behaviour and, very worryingly for us, we believe there is a huge impact on housing supply.”

CommonSpace sought comment from Campbell on the High Street development proposal, but received no response at the time of publication.

CommonSpace is entirely reliant on small, regular donations from you: our readers. Support YOUR independent media.