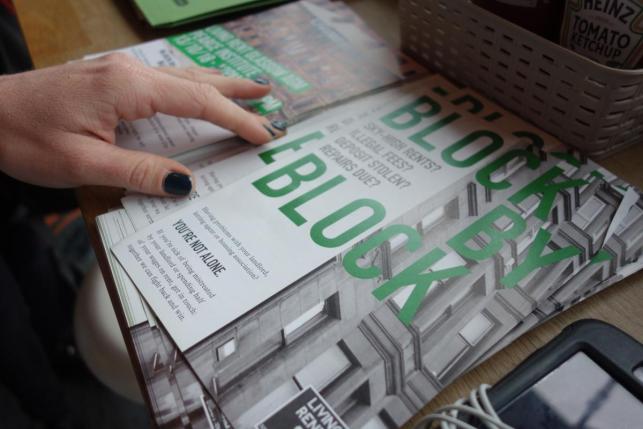 THE Living Rent Scottish tenants’ union has secured a breakthrough agreement with a Glasgow letting agency, emphasising the rights of tenants not to pay illegal fees.

The agreement, signed with Home and Property (HAP) Lettings in November also allows tenants to claim back three times the sums they were charged upon moving in, and backdates this right to the relevant legislation covering illegal fees.

The agreement with HAP Lettings reads: “The signatories below will never charge additional premiums to their tenants.

“In particular, signatories agree that costs and labour incurred in referencing, credit checking, administration etc are the responsibility of the letting agents themselves. They therefore agree that it should not be demanded, encouraged or suggested that tenants 1) use third party services which will charge them a premium, 2) can ‘opt in’ to referencing, checking or administering themselves, if this will mean costs undertaken by the tenant. They recognise that such suggestions amount to a condition of granting the tenancy and are therefore in contradiction to current legislation and the Letting Agent Code of Practice.”

The union has noted that the statement essentially reiterates the law on matters such as letting agent fees. However, violations of laws governing fees and other tenants’ rights have become commonplace in the Scottish private rented sector, which has expanded considerably in recent years.

The union therefore hopes the statement will be signed up to by other lettings agencies across the country.

The statement goes on:

“Letting agents now found to be charging illegal premiums will be liable to pay the tenant three times the total amount charged.

“The agreement is effective retroactively and any premiums charged since the implementation of the relevant legislation will be paid back.

“Representative bodies and accreditation groups will disaffiliate from those agencies found to be charging premiums.

“The agreement demands only that the law is upheld, therefore they implore all other agencies cease the practice and sign the agreement.”

A report compiled by tenants on behalf of the union for its Seize the Fees campaign found in October that as much as £1.6 million per year may be taken in illegal fees by landlords and letting agencies in Glasgow.

Living Rent member and Seize the Fees campaign organiser Tom Roberts said: “From our research, it is clear that a large number of letting agents across Glasgow and the rest of Scotland continue to charge these premiums originally outlawed in the late 80’s.

“From our interactions with some letting agents, they do so with impunity. The complete lack of enforcement for so long shows clearly the balance of power between tenants, landlords and successive governments. These fees can amount to hundreds of pounds and present yet another barrier to decent affordable housing in a time when rents and homelessness are both on the increase. It is very encouraging that HAP have chosen to be part of the solution and it is now time for other letting agents to step up.”