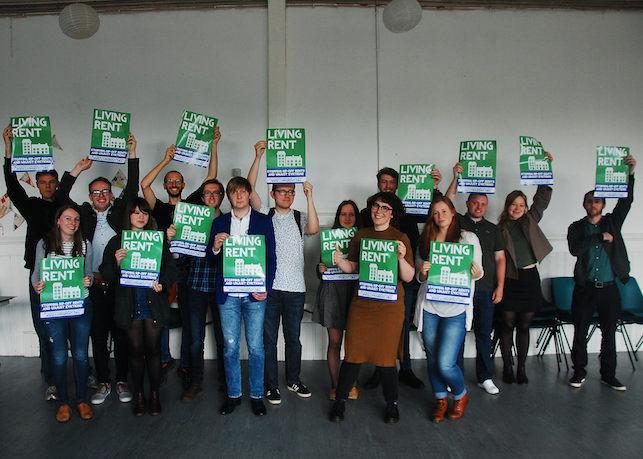 LIVING RENT, Scotland’s tenants’ union, have triumphed in what they describe as their “strangest case yet”, following a five-day standoff with Glasgow letting agency Infiniti Properties.

The case began when one of Living Rent’s members, Hugh, contacted the union concerning an illegal fee that had been collected by the letting agency, along with disputes over deposits. According to an account of the overall dispute published on the Living Rent website, Hugh had been charged £180 in “screening fees”, despite the fact that all fees charged by letting agencies not covered under rent or deposits are illegal under the Rent Scotland Act 1988.

The aggrieved Living Rent member reportedly decided to take action after moving out and noticing that Infiniti Properties had attempted to claim back part of his deposit. According to Living Rent, “The evidence that Infiniti tried to use to prove cleaning was needed were in fact, pictures Hugh had took at the start of the tenancy when asking why the place was in such a state of disrepair.”

Following this, the Glasgow branch of Living Rent embarked upon a demonstration outside of the offices of Infiniti Properties, while Hugh was aided by a trained Living Rent defence team in his efforts to secure a refund of the illegal fees charged. Demonstrators arrived at Infiniti Properties to find that the doors were locked, the blinds were shut, two security guards had been hired and the police had been called.

According to Living Rent, “a siege ensued”, as over a dozen members and supporters of Living Rent picked the offices of Infiniti Properties for over four hours. The following day, a negotiation team from Living Rent returned in an effort to de-escalate the situation. Nevertheless, events repeated themselves as the office was locked down and police were called once again.

In a statement, Infiniti Properties told CommonSpace: “As responsible employers, we have a duty of care to protect staff’s wellbeing. The aggressive online comments forced us to hire professional security officers. The situation became extremely intimidating, requiring Police escorts and led to the absence of a heavily-pregnant member of staff.”

“Not locked doors, security guards or police will deter us from getting justice for our tenants and members.” Living Rent

“We applaud good practice, and believe everyone has a right to put forward their case. However, when this is prolonged, intimidating and causing staff distress, forcing us to lock our doors, there’s a better way to do things.

“As such, we contacted our former tenant and came to a mutually agreeable outcome whereby he agreed to certain deductions from his deposit which allowed us to instruct Safe Deposits Scotland to make a payment to him, and as a gesture of goodwill we made a payment to bring the matter to a close, this payment was not a refund of his fees as claimed by Living Rent.”

In a statement on their website describing the events leading up to the payout, Living Rent wrote: “The extreme measures with which Infiniti reacted has proven that companies like them are not used to being challenged by organised tenants. Our members have shown that discipline and solidarity in the face of rogue landlords and letting agents goes a long way to ensuring the rights of tenants.

“Not locked doors, security guards or police will deter us from getting justice for our tenants and members.”