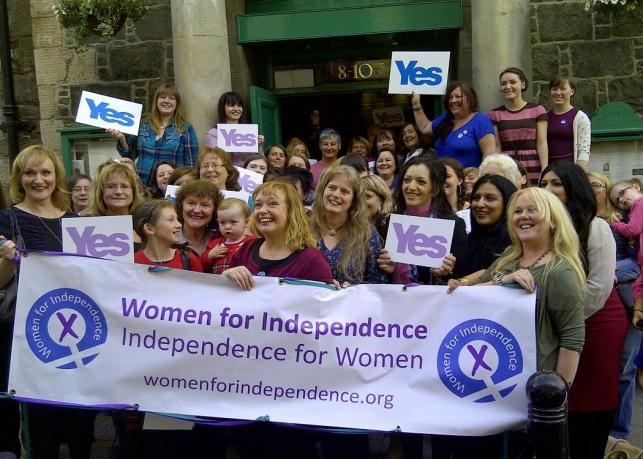 YES EAST KILBRIDE will host an evening with Women for Independence (WFI) on Thursday 28 September, featuring a panel of three pro-independence women.

Speaking at the event at the Murray Owen Centre in East Kilbride will be  former SNP MP Tasmina Ahmed-Sheikh and WFI national committee members Rosemary Hunter and Mairi Tulbure.

Tasmina Ahmed-Sheikh told CommonSpace what the audience can expect from her contribution: “I’ve been asked to speak about voter engagement and how to get more women engaged in the independence movement.

“Looking at the impact of Brexit, this will have a disproportionate impact on women.” Tasmina Ahmed-Sheikh

“I’ll be talking about my own personal experiences in politics, in particular as a minority ethnic woman.

“It’s all about inspiring and encouraging people to come forward.”

Explaining why events such as these are important, she said: “We need to take women – and ethnic minority women – from being voters to being frontline, because the contribution they make is so valuable.

“In terms of the independence movement, and looking at the impact of Brexit, this will have a disproportionate impact on women, as all UK government budgets do.

“We need to make sure women are aware of how this impacts on their lives and that women can come forward and be represented and say, ‘this isn’t what we want’.”

“My own family has said to me, why would you want to stand in politics again after the threats and abuse?” Tasmina Ahmed-Sheikh

Ahmed-Sheikh said that it was also important for women to understand the less positive sides to being involved in politics. She said: “I feel a sense of responsibility to other women, to encourage them to get involved but also to make them aware of the atmosphere.”

She highlighted recently published research by Amnesty International which revealed the scale of online abuse experienced by women MPs. The research found that, in the first six months of 2017, prior to the General Election, 25,688 abusive tweets towards women MPs were posted.

Two in five of these were aimed at black and minority ethnic women, despite there being eight times as many white women in parliament.

Ahmed-Sheikh said: “It’s clear that some people will do anything to bring us down. This is why we need a concerted effort to increase our numbers.

“My own family has said to me, why would you want to stand in politics again after the threats and abuse? But we have to keep going.

“It does put women off, but we can’t be cast back into the shadows.” Tasmina Ahmed-Sheikh

“It does put women off, but we can’t be cast back into the shadows.”

The problem is one which crosses party divides, and Ahmed-Sheikh said she believes that “wherever women can work cross-party to address these issues, they should”.

“This event will be an opportunity to hear three fantastic speakers put forward the positive case for Scottish Independence. This is an event not to be missed.”

The event, which was moved from its originally planned venue due to demand, is free to attend and will include a question and answer session with the speakers. Registration for the event is open here.