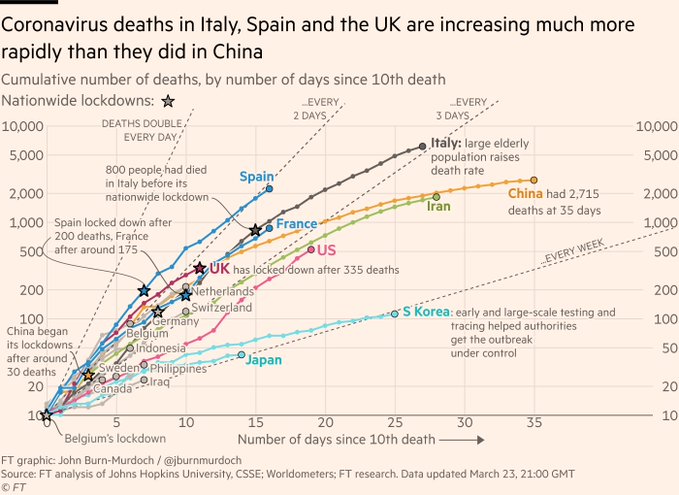 The lockdown is on. The government has finally done what should have happened weeks ago. Now we are running to catch-up, and the government has to run much faster. Both governments, I should say. The Scottish Government has acted in unity with the UK Government, and as such has also been utterly inadequate so far. Without doubt […]

The lockdown is on. The government has finally done what should have happened weeks ago. Now we are running to catch-up, and the government has to run much faster. Both governments, I should say. The Scottish Government has acted in unity with the UK Government, and as such has also been utterly inadequate so far. Without doubt the biggest scandal is the lack of testing. There is no explanation for why mass contact tracing and testing was not in place from the beginning. That is now happening, but it has still not been adequately ramped up. Read public health physician Allyson Pollock’s letter to the Scottish Government pleading with them “immediately to institute a massive centrally-coordinated, locally-based contact tracing and testing programme”, saying that it is the “classic tools and approaches in public health to infectious diseases”. Second: the lack of decent protective equipment for NHS frontline staff. There is now widespread concern among public health experts about hospitals being a major source of community transmission of the virus. Compare all this to Germany, where there is four times as much testing so far than in the UK and doctors apparently have the sort of quality kit that is needed for COVID-19 (the least they deserve). Germany is stemming the virus better than just about anywhere else in Europe at the moment: government must learn, very quickly. And that’s before we get on to the economic fallout: the lack of support for tenants (which still remains behind the UK Government on no evictions, shockingly), the continual refusal to enforce rather than request businesses do not lay people off, the lack of enforcement in place around supermarkets and hoarding, and the apparent total lack of economic planning measures to deal with what is to come.

All of this matters, because although we are in lockdown, it doesn’t mean we as citizens just submit ourselves passively to a state which now has extraordinary powers and hope that they suddenly become capable of looking after us. Our job is to make sure the government does its job. And let’s be clear, if it wasn’t because of pressure from the people put upon government, we would be even further behind where we need to be right now. An active, politicised citizenship has never been more important than it is right now.

I say all this because there is a worrying atmosphere in the air that has been building before the lockdown. The atmosphere is one where the politicians hold the people to account, not the other way round. That their job isn’t to focus on rapidly re-writing the laws of the land and doing what it takes to to deal with this, but instead to communicate frustration when someone hoards, or doesn’t follow what has been confusing and often contradictory advice. Politicians acting in this way, many of whom were not so long ago promoting the virtues of herd immunity strategy, are being cheered on by a legion of social media followers. There is a viral video, which the BBC has also put out, of Italian Mayors running around shouting at people about breaking the lockdown. Many people’s reaction to the video appears to be “why are people so stupid?” My reaction is: “Please don’t cheer on politicians who totally messed up the public health response initially with negligent complacency, until they can prove they can do the necessary governing work to prevent social catastrophe, not just curry political favour through performative displays.”

Let me be clear: people have to obey the lockdown. And we as a citizenry should be vigilant about that. But if politicians do not start governing across every area of economic and social life to provide people in lockdown with what they need to live securely under these extraordinary circumstances, then at some point people will become desperate and lockdown breaches will become inevitable. There’s nothing about what the government has done so far which suggests to me that they are up to that task, so we have to push them to get there. The politicians have to govern and the citizens have to hold them to account. That’s how this has to work.