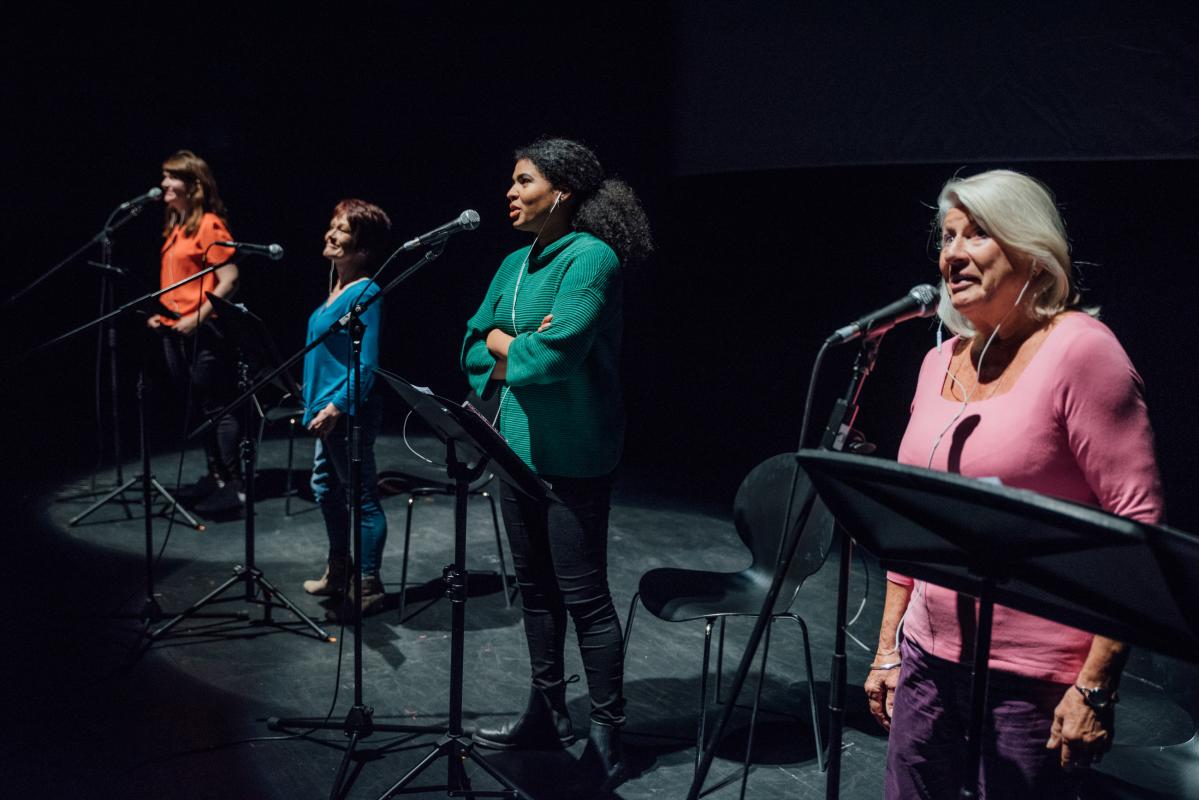 TRAVERSE THEATRE will bring a provocative performance on the subject of violent sexual rhetoric and sexist commentary to the Scottish Parliament on 9 November, to be viewed and discussed by MSPs.

Taggart actress Blythe Duff will join the cast for a one-off performance, alongside Maureen Carr, Rachael Spence and Joanna Tope.

Entitled Locker Room Talk, the piece was initially a response to a video leaked during Donald Trump’s presidential campaign last year in which he boasted about sexually assaulting women, only to later dismiss the comments as “locker room talk”.

Traverse artistic director Orla O’Loughlin told CommonSpace: “Gary McNair met with us and we thought we had to challenge the idea that this can reduced to ‘locker room talk’, because it has far reaching consequences.

READ MORE: Naya Koulocheri: All the Weinsteins of our world have this one thing in common (9 letters)

“There were various responses to ‘pussygate’, none of which felt adequate. It consisted of people saying, ‘oh, it’s fine, it’s just locker room talk’, or people saying. ‘I’ve been in locker rooms and nobody talks like that’, and then it moved on.”

By contrast, O’Loughlin said, this performance and the integral after-show conversation is a chance to have a “proper conversation” about the issues. “It’s tough, it’s powerful, and it’s necessary,” she added.

In recent weeks, the issue has again been pulled firmly into the public consciousness following the string of allegations against Hollywood producer Harvey Weinstein, women’s use of the #MeToo hash-tag to raise awareness of the ubiquity of sexual harassment and assault, and the emergence of allegations aimed at politicians and staff at Westminster and Holyrood and the culture within those workplaces.

The Scottish Parliament performance and post-show conversation is billed as an important opportunity to “confront the crisis of gender, masculinity and extreme masculinity from Hollywood to Holyrood”.

O’Loughlin said: “We believe that the first step towards positive change is visibility and discussion. At this tipping point moment, as many brave individuals come forward to share their testimonies of violence and harassment, it’s clear that society must take action.

“The Traverse is proud to take a lead in tackling this pressing and difficult topic – presenting this piece to members of the Scottish Parliament provides a powerful opportunity to effect real change.”

Asked about the particular salience of the performance amidst the recent of coverage of these issues within the political sphere, O’Loughlin said: “It’s such a pervasive issue and it affects every industry at every level, so it can only be relevant to parliament as well.”

O’Loughlin said that the reaction to the show so far has been powerful. “Key [responses] that have come up are that this is a difficult conversation, there is some difficult material here, and taking it out of its every day context amplifies its effect. It’s confronting,” she said.

“It lays bare some very ugly behaviours in an attempt to challenge the attitudes which can lead to abuse – and we continue to be overwhelmed by the interest and engagement of those who have seen the show.”

“The other thing that comes up is what a tragedy this is for women but for men too, because it arises out of an expectation of masculinity that is toxic,” she added.

O’Loughlin said there is a sense that women attending the performances “feel a release”, because they are so used to being told to be silent on the issue.

READ MORE: Alasdair Clark: The “not all men” brigades need to realise how much harm they are doing

Early on in the show’s life, O’Loughlin said there were some more critical reactions. “There was a sense we were misrepresenting men – ‘hash-tag not all men’”, she said. Some suggested that the issue they were really addressing was class, “the subtext being that this was about working class men”.

In reality, O’Loughlin said, Gary McNair used interviews with a wide range of men of different professions and backgrounds, who shared the material with him freely.

Another response the piece comes up against is the question “what about women? Women are just as bad”. O’Loughlin’s response to this: “Give me an example”. “There’s something about the level of violence and threat involved,” she added.

Ultimately, O’Loughlin said, she has found that “people are upset, people are angry, and people want change”.

The performance in parliament, she hopes, will be an opportunity to “speak truth to power” and set this change in motion.

“We look for our MSPs to be vocal around the issues and to support whatever change looks like,” she said.

“In terms of gender and abuses of power relating to that, it’s never felt more urgent. If there’s ever a time that we’re going to address that, it’s now.”

SNP MSP Rona Mackay, Deputy Convenor of the Justice Committee, said ahead of the performance: “I am delighted to be able to host Locker Room Talk, and the Traverse Theatre, in the Scottish Parliament.

“The magnitude of sexual harassment, assault, abuse, rape and derogatory behaviour towards women has recently been highlighted, following the prominent #MeToo hashtag, and what is being spoken about more and more is the inequality and injustice that it is rooted in.

“Through various actions the Scottish Government are taking, they are sending out a strong message that this type of behaviour will not be tolerated in Scotland. But, what is clear, from the past few weeks in particular, is that we must challenge the attitudes that lead to harassment, abuse, violence and bullying – and that is what Locker Room Talk does.”