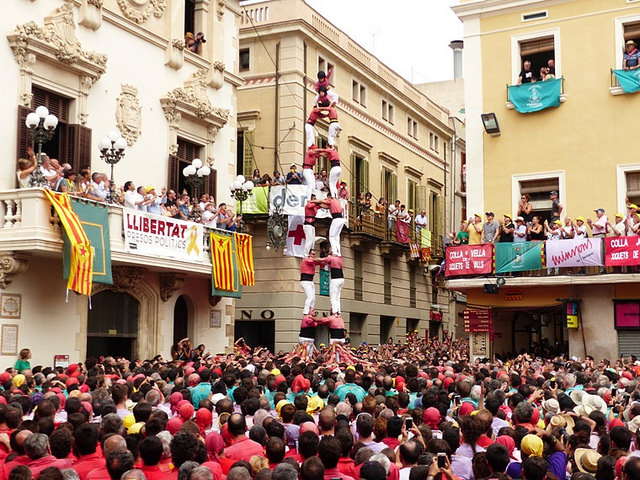 “Our government has committed to making the republic a reality,” Catalan President Quim Torra said ahead of the mass mobilisation

Hundreds of thousands of demonstrators are taking to the streets of Barcelona to celebrate Catalonia’s National Day of Diada and show their support for independence, despite a heavy police presence.

At the time of writing, protestors have already begun pouring into central Barcelona, many of them having travelled from all of over Catalonia and beyond, to take part in the demonstration in favour of the Catalan Republic proclaimed last year. The assembly, expected to stretch six kilometres through the capital of Catalonia, began at 5.14pm local time, to mark the year 1714, when Catalonia lost its sovereignty during the War of the Spanish Succession.

Despite the mutual suspicion that has existed between Spanish national authorities and many Catalans since the state violence that marked the Spanish Government’s attempted suppression of the 2017 independence referendum, around 1,000 officers from the National Police and Civil Guard have been dispatched to Catalonia by Spain’s Interior Ministry.

“The demonstration will show, once again, that there is a reality behind the dramatic situation with the political prisoners and exiles: more than two million people mobilized and determined to exercise their right to self-determination and to demand Catalonia’s independence.” Catalan Government spokesperson Elsa Artada

According to a source from within the Ministry quoted by the Spanish newspaper El Pais, this was due to the “obligation that the ministry has to consider all scenarios and guarantee citizen safety,” despite the fact that maintaining public order is usually the duty of the Mossos d’Esquadra, the police force of Catalonia, some of whom have been accused by Spanish authorities of protecting organisers of the outlawed 2017 vote. Thus far, no incidents of violence have been reported.

In addition to performing a show of strength in support of Catalan independence, the demonstration also calls for the release of Catalan political prisoners, with Catalan President Quim Torra promising further solidarity efforts in the coming weeks.

Earlier today, echoing former Catalan protests, tractors bearing yellow ribbons – the symbol of solidarity with Catalonia’s political prisoners – drove into Barcelona from rural areas, while banners bearing the faces of the prisoners and the word ‘Free’ have been hung from the city’s lamp posts.

Speaking in a televised address on 10 September, Torra said that, although he would not take unilateral action to free pro-independence prisoners who are being held in Catalan prisons: “If the prisoners are not absolved, my government and the Catalan parliament will take necessary action.”

“Our government has committed to making the republic a reality,” he continued. “Long live free Catalonia.”

Amid reports that more than two million people have mobilised to take part in the demonstration, whether in Barcelona or beyond, Catalan Government spokesperson Elsa Artadi today called on the Spanish Government to “face reality.”

Artadi said: “The demonstration will show, once again, that there is a reality behind the dramatic situation with the political prisoners and exiles: more than two million people mobilised and determined to exercise their right to self-determination and to demand Catalonia’s independence.”

The Catalan Government is seeking an agreement from the Spanish Government under Pedro Sanchez’s new government to hold a new, binding independence referendum. Thus far, Sanchez has only offered a vote to reorganise the nature of Catalonia’s limited autonomy.

The demonstration – which will feature a speech by Aamer Anwar, the Scottish lawyer of exiled former Catalan minister and St Andrews academic Clara Ponsati – will be split into 37 sections, with a rocket being launched as a signal to begin. This will then trigger a wave of sound, moving through the march, before reaching a symbolic wall which will collapse as a metaphor for the ability of the Catalan people to overcome any obstacle in their battle for self-determination.

Unionist opposition parties the Catalan Socialists (PSC) and Ciutadans have questioned the Catalan Government funding behind today’s events, criticising the political nature of National Day celebrations. Both have stated they intend to demand details of public money spent on organising the demonstration.

ANC Scotland – a branch of the Catalan grassroots organisation behind many of the protests planned for today – will be noting Diada on 14 September, at a celebration held in Edinburgh’s Augustine United Church. The event is co-organised by representatives of the Catalan Government in the UK.