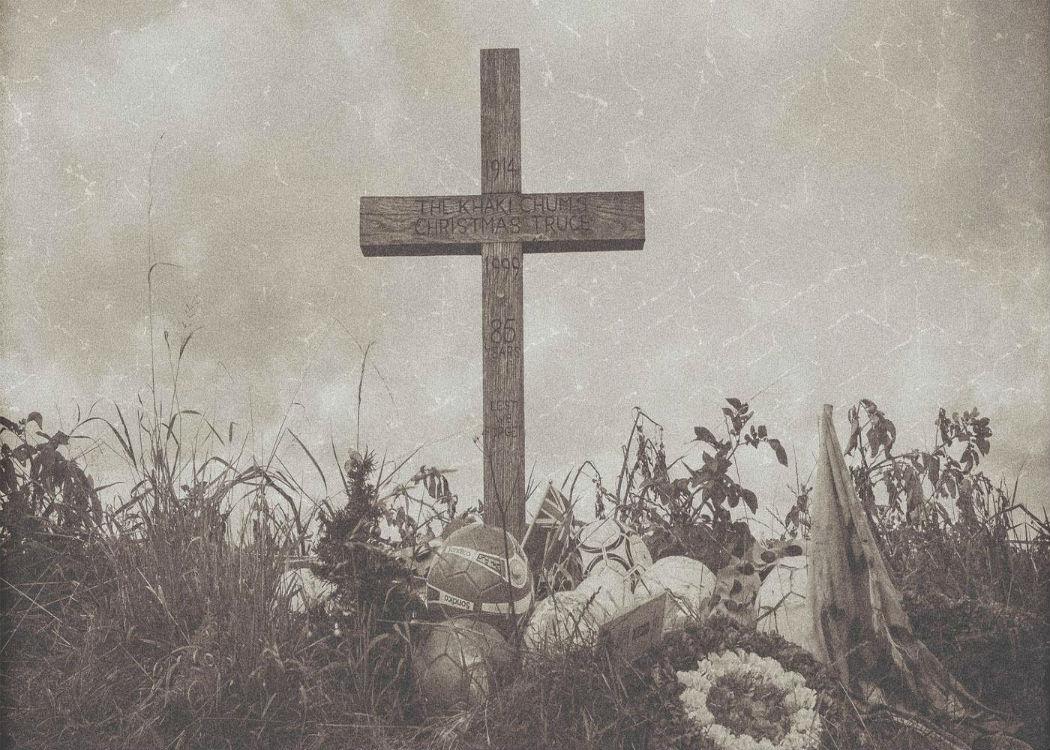 For a long time, the events which took place on the British front line on Christmas Day and Boxing Day 1914 were deliberately downplayed.

Reports of British and German soldiers playing football were treated as myths which had little or no basis in fact. The truth that the firing stopped and troops fraternised could not be completely suppressed but they were treated as isolated incidents. In the main we could be assured the British army stood ready to do battle. Children’s novelist Michael Foreman’s War Games was treated as just that; a child’s story.

Today, the truth is out. Along the near 30 miles that the British army manned on the trench line separating the two sides, fighting came to an end for one to two days virtually completely.

On 25 December the First World War was just five months old, but already over a million men lay dead. Alfred Anderson was just 18 at the time. He would live to 109, dying in 2005, the last survivor of the Christmas truce of 1914. By then he had already seen his comrades die and become used to living under shell fire. By Christmas, he and his unit were billeted just behind the lines in a dilapidated farmhouse.

In 2004 he recalled: “I remember the silence, the eerie sound of silence. Only the guards were on duty. We all went outside the farm buildings and just stood listening. And, of course, thinking of people back home. All I’d heard for two months in the trenches was the hissing, cracking and whining of bullets in flight, machine gun fire and distant German voices.

The silence ended early in the afternoon and the killing started again. It was a short peace in a terrible war.

“But there was a dead silence that morning, right across the land as far as you could see. We shouted ‘Merry Christmas’, even though nobody felt merry. The silence ended early in the afternoon and the killing started again. It was a short peace in a terrible war.”

Private Cunningham, of the 5th Scottish Rifles, was more directly involved and wrote to his friend James D Gray, in Carluke, reporting the events that Christmas day.

“On Christmas Eve the firing practically ceased,” he wrote. “I think both sides understood we were going to have a day off. Through the night we sang carols to one another, the German lines were only a hundred yards away, so we heard each other quite plainly. This went on all night.

“When dawn arrived we started putting our head above the parapet and waved to each other. On our left was a brewery occupied by the Germans and to our surprise we saw a German come out and hold his hand up, behind him were two rolling a barrel of beer. They came halfway across and signed to us to come for it.

“Three of us went out, shook hands with them, wished them a merry Christmas, and rolled the barrel to our own trenches amid the cheers of both British and Germans! After that it was understood that peace was declared for a day. We both got out of our trenches and met in the middle of the field, wished each other seasons greetings.

“The Germans said: ‘A merry Grismas!’. Some of them were quite good at English. We had a most interesting day. The Germans got permission for our officers to bury some of their dead which were lying near our lines.”

Was the football match in no man’s land a myth? Not according to Lieutenant Johannes Niemann, 133rd Royal Saxon Regiment. He recorded this account from the German side.

“We came up to take over the trenches on the front between Frelinghien and Houplines, where our Regiment and the Scottish Seaforth Highlanders were face to face,” he said.

“It was a cold, starry night and the Scots were a hundred or so metres in front of us in their trenches where, as we discovered, like us they were up to their knees in mud. My company commander and I, savouring the unaccustomed calm, sat with our orderlies round a Christmas tree we had put up in our dugout.

“Suddenly, for no apparent reason, our enemies began to fire on our lines. Our soldiers had hung little Christmas trees covered with candles above the trenches and our enemies, seeing the lights, thought we were about to launch a surprise attack. But, by midnight it was calm once more.

I grabbed my binoculars and looking cautiously over the parapet saw the incredible sight of our soldiers exchanging cigarettes, schnapps and chocolate with the enemy.

“Next morning the mist was slow to clear and suddenly my orderly threw himself into my dugout to say that both the German and Scottish soldiers had come out of their trenches and were fraternising along the front. I grabbed my binoculars and looking cautiously over the parapet saw the incredible sight of our soldiers exchanging cigarettes, schnapps and chocolate with the enemy.

“Later, a Scottish soldier appeared with a football which seemed to come from nowhere and a few minutes later a real football match got underway. The Scots marked their goal mouth with their strange caps and we did the same with ours.

“It was far from easy to play on the frozen ground, but we continued, keeping rigorously to the rules, despite the fact that it only lasted an hour and that we had no referee. A great many of the passes went wide, but all the amateur footballers, although they must have been very tired, played with huge enthusiasm.

“Us Germans really roared when a gust of wind revealed that the Scots wore no drawers under their kilts – and hooted and whistled every time they caught an impudent glimpse of one posterior belonging to one of ‘yesterday’s enemies’. But after an hour’s play, when our commanding officer heard about it, he sent an order that we must put a stop to it. A little later we drifted back to our trenches and the fraternisation ended.

“The game finished with a score of three goals to two in favour of Fritz against Tommy.”

A letter to a girl

“At 8.30am I was looking out and saw four Germans leave their trenches and come towards us,” he recalled.

“I told two of my men to go and meet them, unarmed, as the Germans were unarmed, and to see that they did not pass the half-way line. We were 350-400 yards apart at this point.

“My fellows were not very keen, not knowing what was up, so I went out alone and met Barry, one of our ensigns, also coming out from another part of the line. By the time we got to them, they were three-quarters of the way over, and much too near our barbed wire, so I moved them back.

“They were three private soldiers and a stretcher-bearer, and their spokesman started off by saying that he thought it only right to come over and wish us a Happy Christmas, and trusted us implicitly to keep the truce.

“He came from Suffolk, where he had left his best girl and a three-and-a-half horsepower motor-bike. He told me that he could not get a letter to the girl, and wanted to send one through me. I made him write out a post card, in English, in front of me, and I sent it off that night. I told him that she probably would not be a bit keen to see him again.

“I asked them what orders they had from their officers as to coming over to us, and they said none; they had just come over out of goodwill.”

“We then entered on a long discussion on every sort of thing. I was dressed in an old stocking-cap and a man’s overcoat, and they took me for a corporal, a thing which I did not discourage, as I had an eye to going as near their lines as possible. I asked them what orders they had from their officers as to coming over to us, and they said none; they had just come over out of goodwill.

“I kept it up for half-an-hour and then escorted them back as far as their barbed wire, having a jolly good look round all the time, and picking up various little bits of information which I had not had an opportunity of doing under fire.

“I left instructions with them that if any of them came out later they must not come over the half-way line, and appointed a ditch as the meeting-place. We parted after an exchange of Albany cigarettes and German cigars, and I went straight to HQ to report.

“On my return at 10am I was surprised to hear a hell of a din going on, and not a single man in my trenches; they were completely denuded (against my orders) and nothing lived. I heard strains of ‘Tipperary’ floating down the breeze, swiftly followed by a tremendous burst of ‘Deutschland Uber Alles’, and as I got to my own Company HQ dugout, I saw to my amazement not only a crowd of about 150 British and Germans at the halfway house which I had appointed opposite my lines, but six or seven such crowds all the way down our lines extending towards the 8th Division on our right.”

Hulse would be killed three months later in the battle of Neuve Chapelle.

The British High Command was aware long before Christmas Day that a truce was in the air. A few weeks earlier, the commander of the British 2nd Corps, General Sir Horace Smith-Dorrien, issued a warning to his senior officers.

“It is during this period that the greatest danger to the morale of troops exists,” he wrote, warning that soldiers might slip into a “‘live and let live’ theory of life”. Commanders were told that “friendly intercourse with the enemy” and “unofficial armistices, however tempting and amusing they may be, are absolutely prohibited” lest they “destroy the offensive spirit in all ranks”.

It was all to no avail.

Back home a letter published in The Aberdeen Daily Journal on 9 January 1915 by an anonymous writer attacked the truce, saying: “Fie on ye, Scotsmen! There is not much of the boasted Highland Pride left in you when you would sell it for a German souvenir.”

But a Highland Regiment officer took a very different view when he was quoted in The Times in 1915: “It is a great hope for future peace when two great nations hating each other as foes have seldom hated, one side vowing eternal hate and vengeance and setting their venom to music, should on Christmas day and for all that the word implies, lay down their arms, exchange smokes and wish each other happiness.”

Looking back 90 years in 2004 Alfred Anderson said this: “I’ll give Christmas Day 1914 a brief thought, as I do every year. And I’ll think about all my friends who never made it home. But it’s too sad to think too much about it. Far too sad.”

Chris Bambery is a writer, author broadcaster and socialist activist, whose books include A Peole’s History of Scotland (Verso) and The Second World War: A Marxist History (Pluto). He recently produced and presented The Great War: A War to End Wars for the Islam Channel.