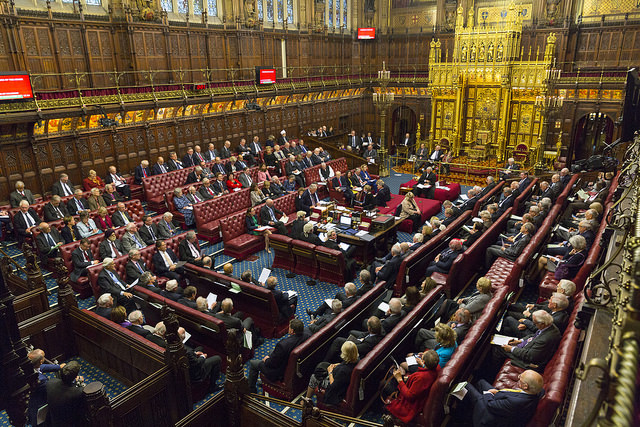 A REPORT by the UK Parliament’s second chamber has concluded that the Scottish Parliament is in line for new powers after Brexit, unless the devolution settlement is changed to prevent it.

The Lords EU select committee report also recommended against any changes to prevent areas including agriculture and fisheries returning to Scotland from the EU, and warned that Brexit would generate an “increasingly unstable” UK constitutional setup.

“Against this backdrop, the European Union has been, in effect, part of the glue holding the United Kingdom together since 1997.” Lords EU select committee

The report reads: “On the day of Brexit, competences currently exercised at EU level will, by default, be exercised in accordance with these pre-existing statutory provisions. It follows that without any change in UK law, Brexit will lead to a significant increase in the powers and responsibilities of the devolved institutions.”

Warning against devolution settlement changes in the short amount of time remaining for EU negotiations, it goes on: “Any attempt to amend the devolution settlements ahead of Brexit would be complex and politically controversial, and we doubt that either the UK Government or Parliament has the capacity to undertake such a task at the same time as achieving a successful Brexit.

“On balance, we therefore conclude that, for the duration of the Brexit process, the statutory balance of competences between the UK Parliament and the devolved legislatures should as far as possible be unchanged. This is not the time to embark on controversial domestic constitutional reform, either by conferring additional competences upon the devolved institutions or by ‘re-reserving’ competences previously devolved.”

The lords’ report came to its findings after listening to a range of expert testimonies, though the findings only operate as recommendations and have no binding power over the UK Government or the Commons.

The Tory Great Repeal Bill will struggle through the Commons, where the Tory-DUP coalition holds a slim majority, and is liable to be changed by opposition parties.

Opposition in the Lords would further complicate the government’s Brexit plans.

Some, however, worry that the UK Government will try and impose a “common framework” on returned areas of competency.

The report also warned that the Brexit process in general would strain the UK’s complex internal constitutional relationships, as the EU had been “the glue holding the United Kingdom together”.

It reads: “Against this backdrop, the European Union has been, in effect, part of the glue holding the United Kingdom together since 1997.

“Brexit therefore presents a risk that the complex overlapping competences within the UK could become increasingly unstable. It is not for the European Union Committee to recommend answers to these essentially domestic constitutional questions.

It further criticised the UK Government for not taking account of theses “constitutional challenges”.

“We note, however, that the UK Government, in its pre-election published statements on Brexit and on the Repeal Bill, did not address the fundamental constitutional challenges now facing the whole United Kingdom. The new Government must now do so, working in a spirit of partnership and cooperation with the devolved legislatures and governments.”

The report also said that Scotland remaining in the single market was not tenable, but that a separate arrangement for EU migration into Scotland should be found, due to the Scottish economies greater reliance on immigration.