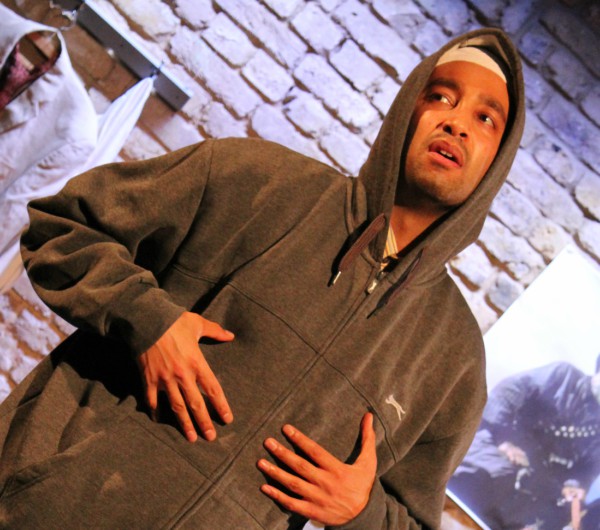 ASIF KHAN has a fantastic voice. That is perhaps the first thing to note about Love, Bombs and Apples by award-winning playwright Hassan Abdulrazzak which has come to the Fringe following a sell-out run at the Arcola theatre in 2015.

In this one-man show Khan plays three separate characters each with their own monologue. While spanning from Palestine to Pakistan to Bradford with Khan’s perfected accents and mannerisms helping to distinguish each section of the play, the monologues all incorporate questions, dilemmas and challenges facing young Arabs in our current times. Each character, in turn, experiences a sense of revelation about love, creativity and socio-politics.

First is a young Palestinian actor who meets a stylish English girl one fateful night and can’t believe his luck when she seems to be interested in him. He confesses to the audience that, he wants to have sex, there are only three options available to him, one: see a prostitute (but it’s not his style), two: marry young (the option he claims most young men take) and three: find a foreign girl. Over the course of their night together, the young actor discovers more hedonism and depth to the woman than previously thought.

Swiftly and smoothly, with the help from sound designer and composer James Hesford, Khan transforms from his young Palestinian lad to a nerdy and slightly obtuse Pakistani man, set on becoming a writer. Aiming to publish “the definitive post-9/11 novel” the monologue tracks the character’s journey from writing his War And Peace length epic to ending up in jail, detained under the Terrorism Act. Misunderstandings about the purpose of his novel, which authorities believe to be “a terror-manual”, he finds himself unwittingly in an interrogation room bemused and baffled by questions such as “are you a member of Al Qaeda or ISIS?” The twist of the plot being that, while initially terrified at the prospect of being detained, the writer comes to enjoy the solitude and perfect writing environment which his cell provides, so much so that he confesses upon release: “I really miss prison”. He complains about the inconvenience of liberal lefties fighting his cause with Twitter hashtags. Khan’s storytelling and subtle audience interaction make the absurdity of this monologue all the more hilarious.

Thirdly, and lastly, we have our Bradford character. A young Muslim Brit who takes his Grandad to the mosque and fantasises about buying an iPhone. This monologue uncomfortable and intelligently links the intensive sermons of religion with the unavoidable corporate advertising of Apple. The performance is both funny and tense as Khan explains the fact that, in a world of zero-hour contracts and lifting boxes in IKEA, joining ISIS seems as equally tempting as the Apple store. After all, he points out, all the sensational videos of powerful tanks and weapons are created on an iPhone. He reaches for a bright green apple laid out in front of him, the fruit is a metaphor for both Jihadi extremism and Western capitalism each bombarding him with promotional selling tactics. The monologue plays with the boundaries of what can and cannot be said in 2017 Britain, daring the audience to challenge his world view.

Love, Bombs and Apples, despite its at times uncomfortable subject matter, ultimately leaves the audience smiling at the confessions and complexities of the comical performances. In order to keep the Edinburgh run to 60 minutes, the fourth character from Abdulrazzak’s original text, a Jewish boxer from New York named Isaac, has been dropped. A 90 minute slot to include the fourth character would have been more than justified, I will be waiting impatiently for the full production to tour.