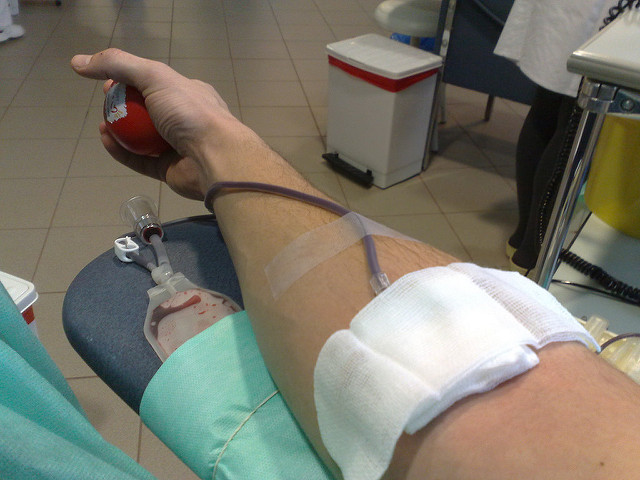 AS THE BAN ON blood donation for gay and bisexual men reduces from 12 months to three months since the last time they had sex with another man, LGBTI charity Equality Network has said too many men are still unfairly excluded by the ban.

The new rules for Scotland and Wales came into effect on Monday, while the same will come into effect in England on Tuesday. This follows a decision by the UK, Scottish and Welsh Governments to instruct their blood services to change the time limit in line with recommendations by the Advisory Committee on the Safety of Blood, Tissues and Organs (SaBTO).

“We remain concerned that for too many low risk gay and bisexual men these new rules are, in effect, a continued ban.” Scott Cuthbertson, Equality Network

Scott Cuthbertson, development manager for Equality Network said: “We welcome that more gay and bisexual men will be eligible to donate blood from today.

Cuthbertson noted that the blood service has committed to considering options for a “more personalised risk assessment”, a policy which Equality Network advocates.

“While this will reduce the number of gay and bisexual men facing discrimination in blood donation, only a system of individual risk assessment will end it.” Equality Network briefing

The briefing says that a policy of a blanket ban based on gender or sexual orientation amounts to discrimination, and states of the reduction to three months: “While this will reduce the number of gay and bisexual men facing discrimination in blood donation, only a system of individual risk assessment will end it.”

As the new limit comes into effect, Cuthbertson said: “We look forward to continuing to work with both the blood service and the Advisory Committee on the Safety of Blood, Tissues and Organs (SaBTO) to eliminate all unwarranted discrimination from the UKs blood donation rules.”

Northern Ireland only lifted the lifetime ban on blood donations from men who have sex with men in September last year, reducing the limit to one year.

The Scottish Government had not responded to a request for comment by the time of publication.